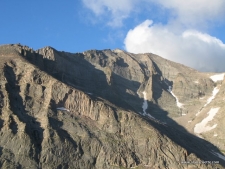 Mt. Meeker is the poor cousin of mighty Longs Peak. Just missing out being a 14ers by a mere 89 feet, Meeker is the mountain you see from Denver, not Longs

At 13,911′ is is one of the highest 13ers but is often passed by with climbers going for Longs, the highest in Rocky Mountain National Park, at 14,256′. I know this since I have passed it by while on my way to Longs on multiple occasions.

So on this mid July day in 2010, I set out to pay homage to this peak, little did I know she would not make this a trivial “tag”.

To reach Meeker, you can approach from south or take the traditional Longs Peak trail to the Chasm lake junction. Instead of going north towards Granite Pass and the Boulder Field then the KeyHole; you go straight towards the Loft Couloir. This is the same route as Clark’s Arrow to the Loft route to Longs.

With it being summer, I set my home alarm for 3:00 AM and arrived at the trail head parking lot about 4:45 – it was already almost full. I was walking the trail at 5:00. It was a quiet summer morning with mild temps, clear skies – nothing warned of the conditions ahead.

I reached treeline in about 45 minutes and continued to the junction in about the same time. I paused to inspect the Meeker ridge considering if I should take it as my exit from Meeker. 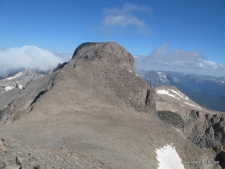 The next step was to ascend the Loft Couloir, a gully of about 1000′ with moderate angles of 20 to 30 degrees. There was still snow in the Couloir but it was easily avoided. I reached the exit ramp from the couloir when the conditions began to change.

As I reached the Loft proper, the winds picked up significantly. While I am used to the high winds on Longs, it mostly occurs outside of summer. The weather forecast had called for a warmish day up high with the usual afternoon thunderstorms. But as I climbed higher, the winds were brutal. I added my final layer as I was cooling off quickly.

The trail to the summit of Meeker follows the scree field from the saddle. I loosely followed it fighting against the wind.

Soon I was on the ridge proper and crouched as low as possible to obtain a low profile as I crawled across the ridge to the true summit. Once there I dropped into a hole provided by the boulders for a respite. Wow, it was windy!

OK, so what I was trying to say was it was windy 🙂 but I did get a great look at Longs which is only about a mile away. Maybe Meeker didn’t like the fact I mentioned Longs!

Well it was a great day and a long missed mountain. Meeker is certainly a worthy summit.