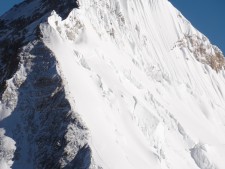 Summits pushes underway leaving the South Col at 8:00PM. Winds are reported to be less than last night. Teams are reported above Balcony and heading towards South Summit in good conditions.

Once again, I start an update with the death of a Sherpa. Namgyal Sherpa reportedly has died at 8300 meters on the North side on Friday. There are few details on cause of death but it is confirmed and his family has been notified.

Namgyal, 35, was a mainstay in the Sherpa and climbing community with 7 summits but also one of the leaders in the Climb for Peace and Extreme Everest expeditions, a clean up climb. He was known for his camera and filming skills. He will be missed. I climbed with him on Shishapangma in 2007.

My condolences to his family, teammates and friends. This is the 6th death this season, four being Sherpa.

After an up and down night Thursday, teams are looking for something a bit more predictable on Friday. There are a lot of climbers already at the South Col but the big push happens Saturday night.

Eric Simonson, IMG, kept us informed about one of his three sub teams as they left the South Col and turned back in harsh conditions. They are back down at C4 aka the South Col, and will presumably do another attempt tonight.

It is possible to make a second summit bid if you have enough oxygen. But the real measure is willpower. If climbers were only out for a couple of hours from the South Col, they have an excellent chance of making another push, in fact, it may be better now that they have the experience.

I know after my aborted 2008 attempt, I considered it after returning to C2. But the thought of climbing the Lhotse Face once again was enough to discourage me and gave into the will of the mountain.

One of the common question is what happens to the body at 8000m. In a word, it is dying. Food is difficult to metabolize, rest is difficult and everything takes much, much longer than at lower altitudes. It is an inhospitable environment where most people minimize their exposure.

Alpine Ascents gave this update on their Friday night plans:

I have been pouring through numerous weather forecasts and relaying all the information I find up the mountain to the South Col where our guides are currently deciding if they will leave for their summit push tonight or hold out another day at Camp 4. We have enough resources to stay an extra day if the weather does not line up for us, but it looks like the conditions are trending toward a good summit window for tonight.

The winds have started to calm down and have shifted toward the north. Several of the forecasts I review indicate that this means the winds will stay lower and manageable for several days to come. Garrett Madison is currently collecting information from other teams in the South Col on the numbers of climbers we can expect today and tomorrow. So far the numbers going for the summit tonight are not too great and it looks like there will be likely be more climbers tomorrow. With winds calming and crowds at a reasonable level it looks to me like tonight will be a go.

There are many climbers ready to push for the top over the next few days including over 100 from India including a group of 16 year-old students, the Indian Army and a pair of twins looking to set a record.

For those of you who have gone to the area of Kathmandu known as Thamel, there was a huge fire last night.  Apparently a small fire broke out at a place across from Dolce vita, and then a gas cylinder exploded.  All three of the Kathmandu firetrucks were dispatched but Pilgirms books and five other businesses burned to the ground. Luckily there were no fatalities.