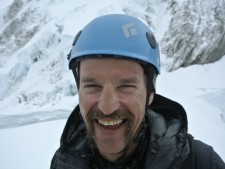 Speed climber Chad Kellogg died in a rock fall in Patagonia on February 14, 2014. These details were reported on the forum at Supertopo:

Over two days Chad Kellogg and Jens Holsten climbed the Afanassieff Route on the NW ridge of Cerro Fitz Roy in southern Patagonia, order reaching the summit in the late afternoon of February 14th. They then started the long descent via the Supercanaleta. While pulling down their ropes, on the third rappel down, one of them got stuck. As they pulled to retrieve it the rope dislodged a block which hit Chad. He died instantly. It was 9PM. Jens continued the descent alone through the night, reaching the base early in the morning to then continue to El Chalten, the nearest town. Because of the complexities of the location a body recovery will not be attempted.

Kellogg built his fame around speed climbing but his passion was being a true high altitude climber. Climbing has a good overview of his career but he attempted to set a new speed record on Everest in 2010, 2012 and 2013 and was thought to be planning another attempt for 2014.

An interesting article about Chad was published on the Summit Register in 2013 giving these tips on training for speed:

Kellogg knew tragedy as well with losing his wife to a climbing accident. He was well liked in the climbing community and will be missed. My condolences to his family and friends.

Elite climbers Simone Moro and David Gottler along with a team from Poland including Tomek Mackiewicz and Pawel Dunaj joined forces early to fix the route and camps but as they made their acclimatization rotations. There have been several summit attempts but each was quickly thwarted due to extreme cold and harsh weather. As the heart of winter approaches, it may be more about luck than skill at this point.

Altitude Pakistan does a great job of covering the Karakorum.

In widely reported business news, menswear retailer Jos. A Banks said it intended to Eddie Bauer for $825 million. Eddie Bauer has gone through significant chaos over the last decade including bankruptcy in 2003. As they regrouped, they launched the widely recognized climbing appeal and gear brand First Ascent which was endorsed by climbing icons such as Ed Vestures, Dave Hahn and Peter Whitaker.

Of course the Eddie Bauer brand has been long associated with climbing including outfitting Jim Whittaker on his 1963 summit of Everest, becoming the first American to stand on top of the world.

“For First Ascent specifically, I don’t really expect much to change,” says a source familiar with Golden Gate Capital, which owns Eddie Bauer. “Jos. A. Bank is very supportive of the Eddie Bauer First Ascent strategy, which really focuses on partnerships with top athletes and guides.”

I’ve never seen a merger or acquisition where the ing company said nothing will change, and then everything does. We will see how the First Ascent line fares in this .