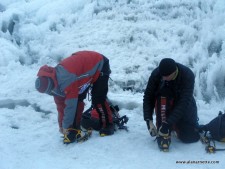 It is a good week for our Everest climbers as they are getting into the rhythm of their new life. Also, all the prep is ready for some climbers to begin spending the night in the Western Cwm.

Ang Jangbu, expedition leader with IMG, posted this update of their progress in establishing Camp1 and Camp 2:

All sherpas carrying to Camps 1 and 2 made it OK. The sherpas who went to Camp 1 managed to set up the kitchen tent plus seven sleeping tents. At Camp 2 they were able to set up the big steel frame tent. We have Ang Karma, Nuru Gyalzen and Ang Nima staying up there at Camp 2 tonight. Phunuru sent his camera with Ang Karma to take pictures, so we will send some when he comes down in a couple days. The schedule for tomorrow has guides Justin, Max and their hybrid climbers and sherpas going up to Camp 1 to sleep. We are sending five more sherpas to Camp 2 tomorrow for building platforms and setting up more tents, and they will stay up there. Tomorrow, we have 22 sherpas carrying loads to Camp 2 and nine sherpas are carrying member personal gear to Camp 1.

It looks like IMG will be the first teams up this year. If this sounds like a lot of work, it is. Let’s put it in perspective, these teams need to have a place to sleep, a toilet, a place to cook and eat during each rotation to acclimatize, then for the summit push and the return. The tent platforms must be literally cut out of the frozen rock at the base of the Khumbu Icefall.

The camps must be able to withstand hurricane (typhoon) strength winds and heavy snow. It must be stocked with food, stoves and fuel. Every day, snow and ice must be melted for cooking and water. And all of this is carried through the Icefall in the packs of Sherpa. It is a brute force method of climbing a mountain – siege style.

If you think this is a lot, keep in mind the early Everest expeditions such as the 1963 legendary West Ridge climb used 900 porters and 37 Sherpas for five Western summiters, a staggering 7.4:1 ratio for that pioneering expedition. Of course they didn’t have access to helicopters!

Some professional climbers do what is called alpine style where they do not set up permanent camps and carry everything on their backs moving steady up the mountain in a single, or few pushes. This is the purest form of climbing and done by only a few these days.

Can you hear me now?

The update on the communications from the Nepal side is good news with the Ncell mobile service back up. Also some good news on communications from the Tibet side came from Bill Burke saying he has full Internet service via China mobile on his iPhone at base camp. I now I’m sounding like an old fart but on my first trips to the Himalaya, we sent postcards back home, just sayin’ 🙂

The RMI team puts a fine point on it:

Hello out there. Billy here checking in for the rest of the gang after another day deep in the Khumbu. Not much to report on another rest day here, other than the fact that the NCell tower began sporadically working today after nearly a ten-day outage. Our team was starting to go crazy… I mean it was like camping back in the 90’s where you were in a deep black hole.

Observations from the Climbers

Yesterday was another cold day, snowing most of the day. Firstly we are grateful that our trek into EBC wasn’t cold. Secondly I feel that sometimes the mountain just wants time for herself, as with the snow and cold were tucked away with heaters and don’t get out to see her Splendor.

Everest is alive. My first thoughts are that there is a thunder storm by the sudden crashing noise only to remember it’s an avalanche. The other day for a brief instant I thought a car had just pulled up, then I reminded myself we were at 5350m! Besides the avalanches, birds are chipping and the crows are flying around. The crows love the Puja ceremony as they eat the rice and flour apparently on the ground, there are also some left overs left by teams for them. I suppose one of the noises is that of our Sherpas who huddle together in the kitchen and are continually laughing.

For the past few morning’s we’ve been woken up by a helicopter, who we feel is going to be landing right on our tents, unfortunately this means an early morning rescue. There are quite a few helicopters, some are just bringing supplies, some we stare at and have no idea what is up, while the rest take away ill s.

Gary Williams over on the north with SummitClimb made this observation from base camp:

Hello from Everest BaseCamp. The teams are all starting to assemble here before we all move up to Interim Camp and then on to Advanced Base Camp; the highest base camp in the world at 6400m above sea level. I have an added appreciation and respect for the early explorers like Mallory, Shipton and Tillman who were the first westerners to pass through this desolate, windswept place; they bred them tough back then as the conditions are harsh to say the least!

One of the films being made this year is about the Sherpas. They have a Facebook page. It is a feature documentary that follows a 2014 Everest expedition entirely from the Sherpas’ point of view. Take a look and like it as I’m sure that would mean a lot to them. Also they have some great pictures.

Finally, there are a few reports of climbers being refused entry into China for their climbs, including Shishapangma. For the second time this season this has been reported and some north side Everest climbers were forced to switch to the south. But these new issues were for teams going to mountains within Tibet so in effect they will see their expeditions canceled. It is not clear on the reason for the refusal to grant them climbing permits.