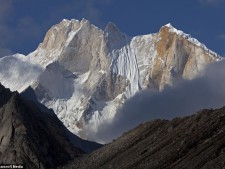 Climbing movies often attract a narrow audience and rightfully so. After all who wants to see someone painfully placing protection, look moving slowly and deliberately covered in Gortex? Well, the movies do this and more.

Meru, which is showing at smaller theaters and festivals worldwide is more a film about climbers than climbing. I saw it recently in our local “boutique”theater. For $7, I was throughly engaged for about an hour and a half.

Most of my climbing readers already know the plot. Conrad Anker’s climbing mentor, Mugs Stump, had attempted the Shark’s Fin on Meru Peak, located in Northern India, twice and failed. When Mugs died on Denali, Anker was left with a strong feeling of unfinished business.

The Shark’s Fin is a 1,500 foot steep prow of near vertical rock and serves as a sub peak to Meru Peak proper. The Fin is 6310 meters or 20,702 feet. The challenge is that it combines high altitude Himalayan climbing with big wall climbing. It had been attempted 25 times with no success, including Anker in 2003. The lesson from all the previous climbs was that it was a big wall aid climb, and not a fast alpine assault.

The movie starts with Anker and fellow climbers, Jimmy Chin and Renan Ozturk on an attempt in 2008. Chin would do the majority of the filming. They push hard, almost too hard running out of food, and fuel. They get tantalizing close to the summit before their experience tells them that this is not the time.

From here the movie moves into background character development, or more accurately, telling us just who are these ambitious climbers. We get insight into what drives Anker, his family, his dreams. We see first how Jimmy Chin does his craft of alpine filmmaking, along with an amazing story of survival in an avalanche. But the most startling story is about Renan who is severely injured in a skiing accident. We see him clinging to life in a hospital bed with Conrad at his side refusing to tell him his climbing days are over.

The next part of the documentary has the trio returning to Northern India for another try. Now 2011, they have studied the previous attempt(s) and given advice to other teams who made unsuccessful bids on the Fin.

If I have a question, or critic, of their efforts, it is why Renan was allowed to return with Conrad and Jimmy. He is pretty banged up with a severe head injury. Part way through their climb on the toughest part, Renan is heard saying he doesn’t know where he is, cannot think clearly yet he is allowed to lead a very difficult technical section. He expresses his relief when it’s over. Perhaps he sums up his ambition with this line in the movie “something I had to do, something worth dying for”, and he almost did.

The movie has a happy ending but more impressive is the determination, and skills demonstrated by these three.

If you want to see what high altitude, technical climbing is all about, see Meru. Not only will the photography stun you but also the personal stories of these men.

Another must see is Valley Uprising, the story of how big wall climbing got it’s start in Yosemite.

3 Responses to “Movie Review: Meru – a Must See for Climbers”