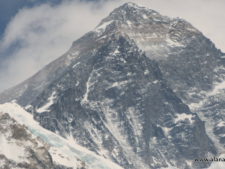 With a narrow summit window opening, many teams are rushing to make their summit bid while many veterans are content to wait this one out. In spite of the warm temps at Everest Base Camp, the summit conditions can be deadly and a few more days can make all the difference in conditions. There are two currently anticipated summit windows: May 14-16 and May 19-20, with more to come to be sure.

South African Ronnie Muhl’s Adventures Global, Seattle’s Garrett Madison’s Madison Mountaineering and the Jagged Globe team are all reported to be pushing towards the top. There are many other smaller teams hoping to draft off these efforts so we may see upwards of 100 people on this first push of the season.

As this chart shows, we are approaching the sweet spot of summit days with May 18th being the top day historically. 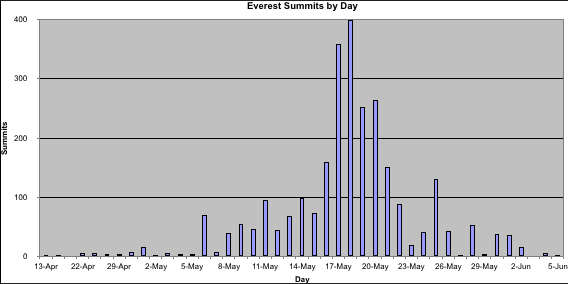 Timing is always a chess game for the climbers – some believe early will beat the crowds, but others will just wait and let the eager ones go first. I always found it interesting that Dave Hahn who has 15 summits and is not on Everest this year, was consistently one of the last people to summit each year. What did Dave know?

The ropes are now fixed just below the Balcony at 27,500’/8348m on the Nepal side and near 27,000’/8230m on the Tibet side. The Sherpas will fix to the summit over the next few days most likely as the teams follow them closely behind – a dangerous strategy if something goes awry with the rope fixing. You may get stalled or forced to re and use precious energy waiting at the South Col.

Again, the season is progressing nicely with little drama – and that is a great thing!! But on Everest there is always something and I guess if one needs to find something to complain about it is the speed of the Sherpas fixing the ropes to the summit. Several small operators have made it the center piece of their Facebook and blog posts that they are being inconvenienced and delayed by rope fixers … Meanwhile other guides proudly declare that “our Sherpas have fixed the ropes …” 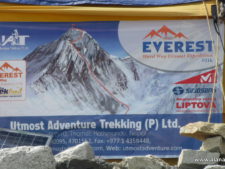 The two Slovakia climbers aiming to summit via the rarely climbed South West Face were caught in a snow avalanche while climbing just after the recent heavy snowfall. The Himalayan reports one climber is injured and needs rescue but helicopters have been stopped by bad weather.

Note this is NOT the normal Southeast Ridge route even thou they ascend from just above Camp 2 in the Western Cwm. The climbers are Vladimír Štrba and Zoltán Pál. They are the only climbers on Everest this year not using one of the two normal routes.

I’ve commented on this before but it is worth repeating that many teams have lost multiple members. Madison Mountaineering says they have seen 3 of their 9 members leave due to medical reasons. Of course, I left our Altitude Junkies team with a upper respiratory infection. TA Loffler is in Kathmandu with HAPE, Furtenbach Adventures lost one of their seven members early on, Summit Climb lost a couple as have IMG and Himex and the list goes on and on.

From what I can determine, none of these are a result of poor hygiene or any issue with how the expedition is being run but rather the result of altitude, ‘normal’ illness or just bad luck. In any event, the remaining climbers have been reduced from 289 to somewhere in the 225 range making the mountain a bit less crowded.

Since 2000 according to the Himalayan Database, the typical member summit success rate is around 56% for members (foreigners, not Sherpas) who reach base camp: 1,728 summits for 3,624 who reached base camp on the Nepal side. The last time we saw member summit numbers under 100 from the Nepal side was in 2006 with 88 member summits. The most for both sides, members plus Sherpas, was in 2007 at 632 .

6 Responses to “Everest/Lhotse 2016: Stampede for the Summit”