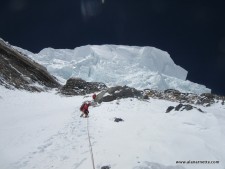 After a normal short period of high winds and heavy snow in the Karakorum, the weather forecast calls for acceptable conditions this week thus teams are moving up their mountains towards the summit today.

And, to be sure, it will be crowded on K2 with 60 climbers reported to be going for the summit on July 14th.

The crowds are not from the climbers themselves but more from the support staff provided by some of the commercial expeditions or heavily staffed private efforts. One individual climber on a single permit has 5 Sherpas for support.

This is a list of the Karakorum 2016 Expeditions permits issued for all the Karakoram mountains this summer.

First over on Nanga Parbat, Ferran Latorre and team are pushing for their summit now:

Tomorrow we will try to do summit! Today it has snowed for 5 hours, it will be an attack on the summit hard but we’ll try it if the weather is leaving us. With these views from the store to the c4 to 7.400 M I say goodbye for today.

You can follow their push on his InReach page. This is the same route used to obtain the first winter summit a few months ago.

On Broad Peak, the Mountain Professional team continues to make progress and are enjoying the views of K2 from their perch:

There was quite a bit of wind and snow during the night, so we were actually expecting to turn our nose back down towards basecamp. However, looking at the snow and not least the weather forecast for the next 24 hours, Tomas and Ryan decided to make an attempt for camp 2.

We woke up to a blue, blue sky and a fantastic view of K2. The scenery here is unbelievable, with sharp mountains basically everywhere. Sorry boss, but the view looking out of our the tent this morning beats any day in the office.

On K2, it appears that Adventure Peaks, Seven Summits Treks and the Polish team are headed higher looking for a summit on July 14th. The heavily supported commercial teams of  Madison Mountaineering and Kari Kobler are also moving higher:

The Madison Mountaineering 2016 K2 Expedition has four climbers, two western guides, and six Nepalese Sherpas. Our neighboring Swiss K2 expedition has eight climbers, two western guides and ten Sherpas. We are very international as we have 13 climbers from 11 countries. We are working closely and well together with the Swiss expedition. We also have about 20 Pakistani high altitude porters that will carry loads to higher camps and 15 cook and camp staff between the two expeditions. The two expeditions are working together with all route fixing, camp establishment and summit bid preparations.

The biggest issues with so many people are limited tent space at Camps 1 and 2 and potential delays on the Bottleneck and the Traverse below the summit serac while the ropes are being fixed.  In 2014, 30 climbers waited several hours near the Traverse while the ropes were being put in – they narrowly escaped frostbite or worse. Perhaps the most serious issue is with rockfall. K2 is notorious for rockfall anyway, with scores of climbers above you, the danger significantly increases.

This year’s technique, or formula, of a large ratio of guides, Sherpas and support staff to paying members is becoming more common on the world’s 8000 meter mountains.

There are several women climbers on K2 this year. As many readers know, K2 has a special reputation for women climbers, some called it a ‘curse’.

Prior to 2014, of the nine women who had summited, five had died – 3 descending from K2’s summit and 2 on other 8,000m peaks. Basque climber Edurne Pasaban was the sixth woman to climb K2 in 2004 and was the only one of four still alive today along with Norwegian climber Cecilie Skog in 2008, Nives Meroi from Italy and Austrian climber Gerlinde Kaltenbrunner who summited from the north side of K2 in 2010.

Best of luck to all!