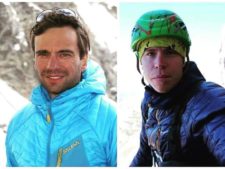 After no contact for 14 days plus hundreds of hours of searching by telescope, on foot, from helicopter and drone, the official search ended today for Italian Daniel Nardi, 42, and British Tom Ballard, 31, on the 8000-meter Pakistan peak, Nanga Parbat.

The families authorized the release of a photo taken a few days earlier by Spanish climber Alex Txikon from base camp showing their bodies positioned in a small rock gulley, behind a rocky spur at approximately 5,900-meters/19,356-feet on the Mummery spur. This was a bit higher than their Camp 3 location. It is reported that there will be no effort to retrieve the bodies at this point but may in the future. 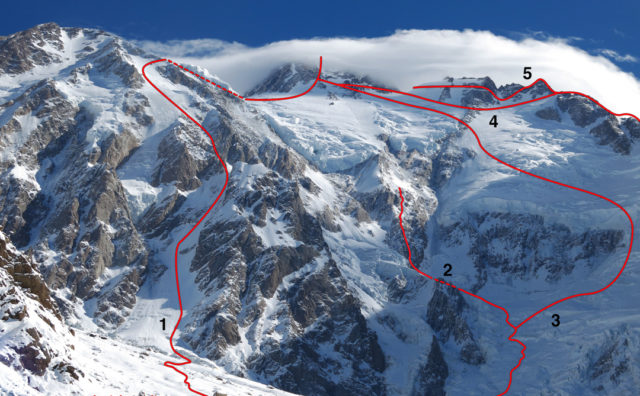 ” we are at Campo 3 the day is good, until recently there was a little wind and clouds on the summit but now the situation has definitely improved. We’re a little tired because we had to bring backpacks to mount c3. Now we’ll start digging for it!”

“Daniele just announced that they arrived at about 6300 meters, maybe even something more! They went up a fireplace different than the one up with Elisabeth. They went on light, now they’re going down to c4. the weather is not good, there was fog, sleet and wind gusts. The last position that Daniele managed to send us was little lower than the one indicated on the picture, then continued in the climb for another hour, the position in red is therefore an approximation.” 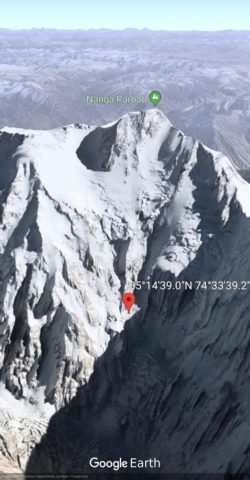 The first helicopter search was conducted on February 27th with Pakistani Alpinist Ali Sadpara on board. It appears their bodies were spotted through a telescope from base camp by Alex Tixkon on March 7th.

The official announcement was made on Nardi’s Facebook page.

We’re heartbroken; we inform you that the research of Daniele and Tom has ended. A part of them will always remain on the Nanga Parbat. The big pain hurts; facing objective facts and after doing everything possible finding them, we must accept what happened.

We are grateful for Alex, Ali, Rahmat and the whole rescue team, the Pakistani and Italian authorities, the journalists, the sponsors, at least all the friends who have shown so much collaboration and generosity. The family remembers Tom as a competent alpinist and brave friend of Daniele. Our thoughts are with him.

Daniele will remain a husband, a father, a son, a brother and a friend lost for a dream that we have always accepted, respected and shared. We like to remember how you really are: in love with life, adventurous, scrupulous, courageous, loyal, attentive to detail and always present in times of need.

But above all, we like to remember you with your own words: “I’d like to be remembered as a man who tried to do something incredible, impossible, but didn’t give up and if I won’t return I’d like to give a message to my son: don’t stop, don’t give up, do your thing because the world needs better people to make peace a reality and not just an idea … it’s worth doing it.”

Alex Txikon had spotted two shapes on March 6. Multiple efforts to use a helicopter to fly over the location were delayed by communication confusion, mechanical failures, and closed airspace due to the conflict with India. Today, the Italian Ambassador to Pakistan,  Stefano Pontecorvo, made this tweet along with this picture:

Photo taken with the telescope by Alex Txikon and his team, made public by Italian Ambassador Pakistan Stefano Pontecorvo (with permission of the families) that has allowed to confirm that these two points that were at 5,900 meters are Daniele Nardi and Tom Ballard #NangaParbat 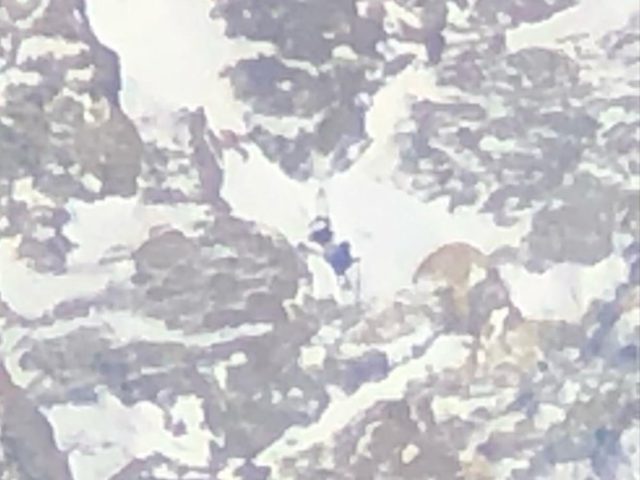 Daniele Nardi in orange is upper left and Tom Ballard, in blue, is just above what is identified as their yellow tent.

Alex Txikon posted this video of some of the areal search including an avalanche. Txikon spoke of almost being hit by an avalanche as they searched the area between C1 and C2. He gave a full account of their search effort on his Facebook page.

The British climber was on his first 8000er. The 30 year-old British climber had established himself as one of the world’s best. In 2015, he became the first person to solo all six of the Alps’ major north faces in a single winter. He was living in the Italian Dolomite Mountains with his father and girlfriend. In 1995 Tom was six years-old when his mother, British alpinist Alison Hargreaves, became the first woman to summit Everest without supplemental oxygen. She died a few months later while attempting the world’s second highest peak, K2.

Nardi, 42, was on his fourth attempt of the Mummery Spur on Nanga Parbat. He had extensive experience on 8000ers including Everest, K2, Cho Oyu and Broad Peak.

My sincere condolences to Tom’s and Danile’s families and friends. Plus deep appreaction to all involved in the search including Alex Txikon, Ali Sadpara, the helicopter pilots, base camp crew and LO plus the Italian Amabasdor.

K2: Kazakhstan, Russia and Kyrgyzstan Team – Climb Over, Back at BC

The Kazakhstan, Russia and Kyrgyzstan team has ended their effort climb K2. They are all back at base camp now. They reached at high of 7400-meters just below the location of traditional Camp 4. The winds were too high and visibility too poor to continue.

Four members of the K2 team lead by Alex Txikon’s , Alex Txikon, Felix Criado, Ignacio de Zuloaga and Dr. Josep Sanchis, are reportedly in transit to K2 base camp where it’s presumed they will continue their effort to summit K2 after locating the climber bodies on Nanga Parbat.