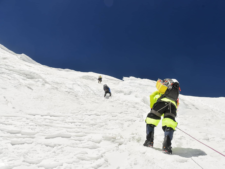 Its almost business as usual on Everest with climbers doing acclimatization rotations, some have finished and are bored at base camp and then there are the chosen few that flew back to Kathmandu for a little relax time! The high winds and snow from the outer bands of Cyclone Fani are long gone and sunny skies are reported but …

The jet stream is parked on top of Everest and has shut down most activity above 7,000-meters on both sides. This means no work on getting the ropes to the summit, no acclimatization rotations to 8,000-meters for those who are not using supplemental oxygen and no stocking of the high camps for the summit pushes. This delay, combined with a lost three days due to Fani, could have some impact later this month.

A look at a “hindcast” (compared to a forecast) from Meteoexploration shows what happened on Everest the past few days. Bottom line, it was windy. Top winds hit over 70mph/112kph.

Erich Roepke who is filming Cory Richards and Topo Men posted this short clip from the North Col during the storm. He added:

The other day, I got to chase @coryrichards and @estebantopomena up the North Col for an acclimatization round. As you can see, winds are building on Everest. We reached the Col right as they really seemed to start ripping. We watched full tents get ripped from the Col and blown to the valley below. Even the @alpenglowexpeditions storage tent was lost. –
Now we wait for the wind to die down for the team to make the next move. –
On assignment for @roam

It all About the Jet Stream!

Lets talk a bit about this. The jet stream is a river of wind that typically travel west to east between 80-140 mph but can accelerate to 275 mph. There are more than one stream. The strongest are the polar jets, at 9–12 km (30,000–39,000 ft) above sea level, and the higher altitude and somewhat weaker subtropical jets at 10–16 km (33,000–52,000 ft). All of the jets move around a lot, sometimes stop, split into two or more parts, flow in various directions including opposite to the direction of the rest of the jet.

The summit of Everest at 8850-meters/29,035-feet pokes into the bottom of the jet stream almost year round. During the spring in the Himalaya it swings between the 70th and 90th latitudes so the jet can be north, south or blowing directly onto Everest itself. When very strong low pressure systems build up in the Bay of Bengal, the jet stream is pushed northward into Tibet. In spring this is usually just before the monsoon season begins. So when this happens, the “summit window” opens and climbers go for the summit in hopefully calm conditions. However, “calm” can mean winds under 48kph/30mph.

According to Meteorologist Geoff Linsley of Everest Weather:

The Indian monsoon changes direction twice annually. The heating of continental Asia during the summer causes a reversal of the jet stream, which contributes to the monsoon season in tropical high altitudes. This happens because the typical north-south temperature gradient is reversed when 30 degrees north becomes warmer than at the equator. Around May, the two forces tend to balance each other and nearly stagnate winds at Mt. Everest. Later in the season when cooling occurs, the subtropical jet reappears, winds begin to pick up, air subsides over India and then heads out to sea. The subtropical jet is stronger in the winter than in the summer and interactions between it and polar jets can lead to strong winter storms.

The reason for this discussion is what impact the jet will have on a potential summit window this year. There is quiet talk that we might see another 2012. Why quiet? Well, it’s a bit early to be shouting and as we all know anything can change. But this is the bottom line. In 2012, the weather was tough throughout May causing one delay after another. In the end, on the Nepal side, there were only five days when summits occurred. Compare that to last year, 2018, when almost the opposite happened, there were 11 summit days from the Nepal side. It was similar on the Tibet side, but this has more impact on the Nepal side due to the large number of climbers, and this year has a record number of permits issued so everything is magnified.

I used the great data from the Himalaya Database to see how many people summited each day, from Nepal, in 2012 and 2018. As you can see, a massive 171 people summited on May 19, 2012, and on the 25 and 26 almost 100 each day. Compare that to 2018, the biggest day was May 15 with 102 summits and the rest were usually a manageable 40 to 70. Everest is a big mountain and the route is long and spread out between the South Col and the summit, but there are a few places where slow teams can clog up the system. If there are less than 100 people on the summit push, it is usually not a problem, over a 100, look out.

We’ll see how this year turns out. 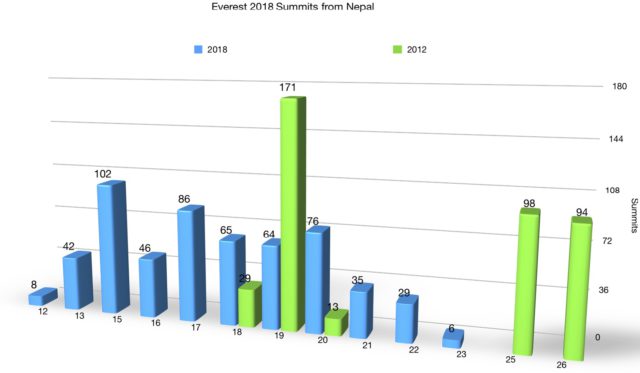 Climbing has resumed with teams returning from a brutal time at Camp 2. Some even tried to tag Camp 3 at 7300-meters on the Lhotse Face but retreated in the big winds. Jagged Globe is there and will try on Tuesday for C3:

The Jagged Globe Sherpa team have established Camp 3 at approximately 7200m on the Lhotse Face. The climbers will climb to C3 early tomorrow morning and spend one night before returning to C2 and Base Camp. The strong winds above 8,000m are forecast to reduce on the 9th, and the Sherpas will start to move the team supplies to Camp 4 on the South Coll then.

Tibet – Inside the Wind over the Weekend

A friend who is on the Tibet side sent me this in-depth accounting of his night when the winds hit. Its a tough read and reveals a lot about what happens on a climb like Everest. He also sent me some stunning photos.

Now, North col itself isn’t a tough objective at all, however sleeping on top of it turned out to be the toughest ever 8000er night for me. Winds were absolutely beyond imagination quite often turning into small local tornadoes. Our tents were well shielded by a big serac wall and still our tents got constantly battered. Every few minutes I would hold onto one side of the tent and my tentmate the other. And then a huge wave of wind came and the entire tent crashed on me. The wind wave was still strong meant that the entire tent was sticking to my face and and my tentmates.

It was super claustrophobic situation and it continued for a bit and then the wind relented. At that point i tried setting up the tent from the inside but it was useless as the tent poles were broken. And just as I was trying to do that the next wave of wind came again and the whole claustrophobia situation occurred again. Just had to wait enough for the wave to pass. This time around once the wave passed I shouted to my friend, guide, mentor climbing Sherpa – Mingma, and initially not knowing our situation he said can you manage for a few minutes. And just then the next wave hit.

Another thing was that I was wearing my one piece suit and was inside the sleeping bag. During this entire ordeal even though our tent was half torn i never felt cold once. Thanks to the nice sleeping bag and suit – both synthetic of course. And then once the wind relented, I asked Mingma to come out and take a look at our situation. He did and realized that we were in terrible shape. He right away helped us move to his tent before the next wind wave hit.

All just in time. Next couple of hours we spent together with Mingma and Norbu, until the first light ht hit and then we got ready and decided to get the heck out. A crazy night for me, and Thanks to the amazing Sherpa team we made it out safely. Getting down to the start of the wall took me an hour and I quickly walked till the crampon point and took a break and heaved a sigh of relief! What an experience it turned out to be. I’m personally super happy that not once I panicked through the whole situation. I think for sure my experience on other 8000ers definitely counted! 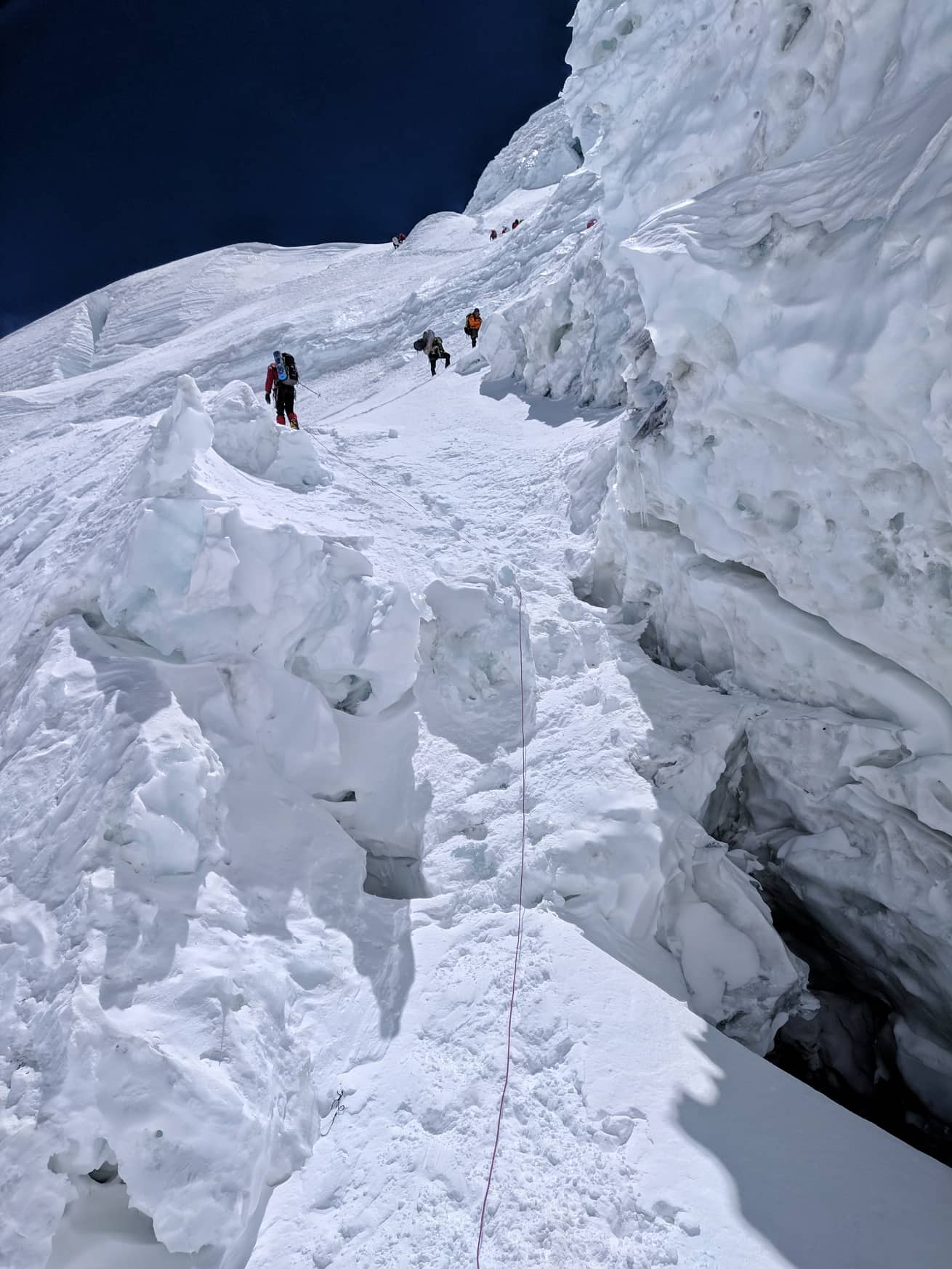 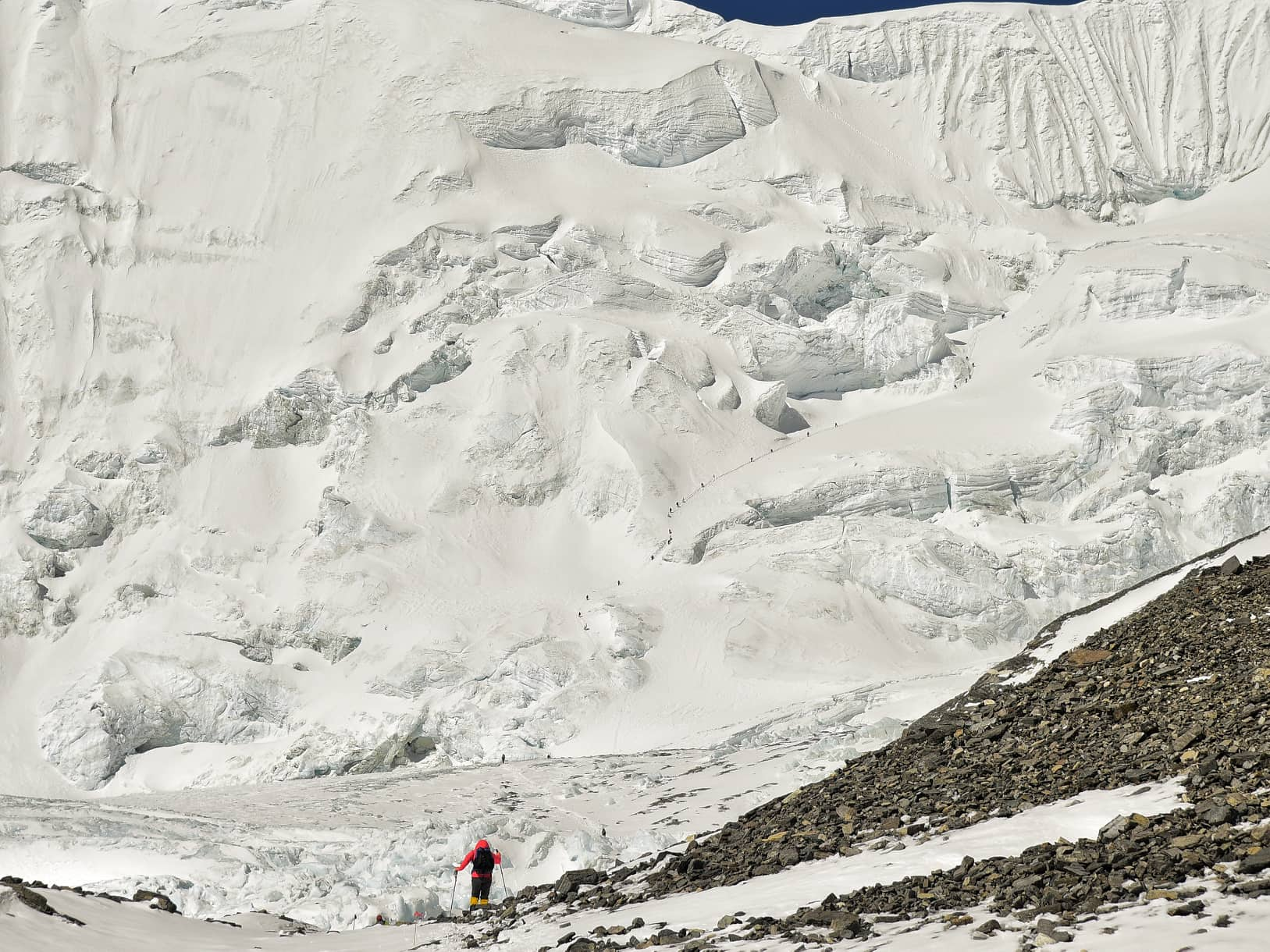 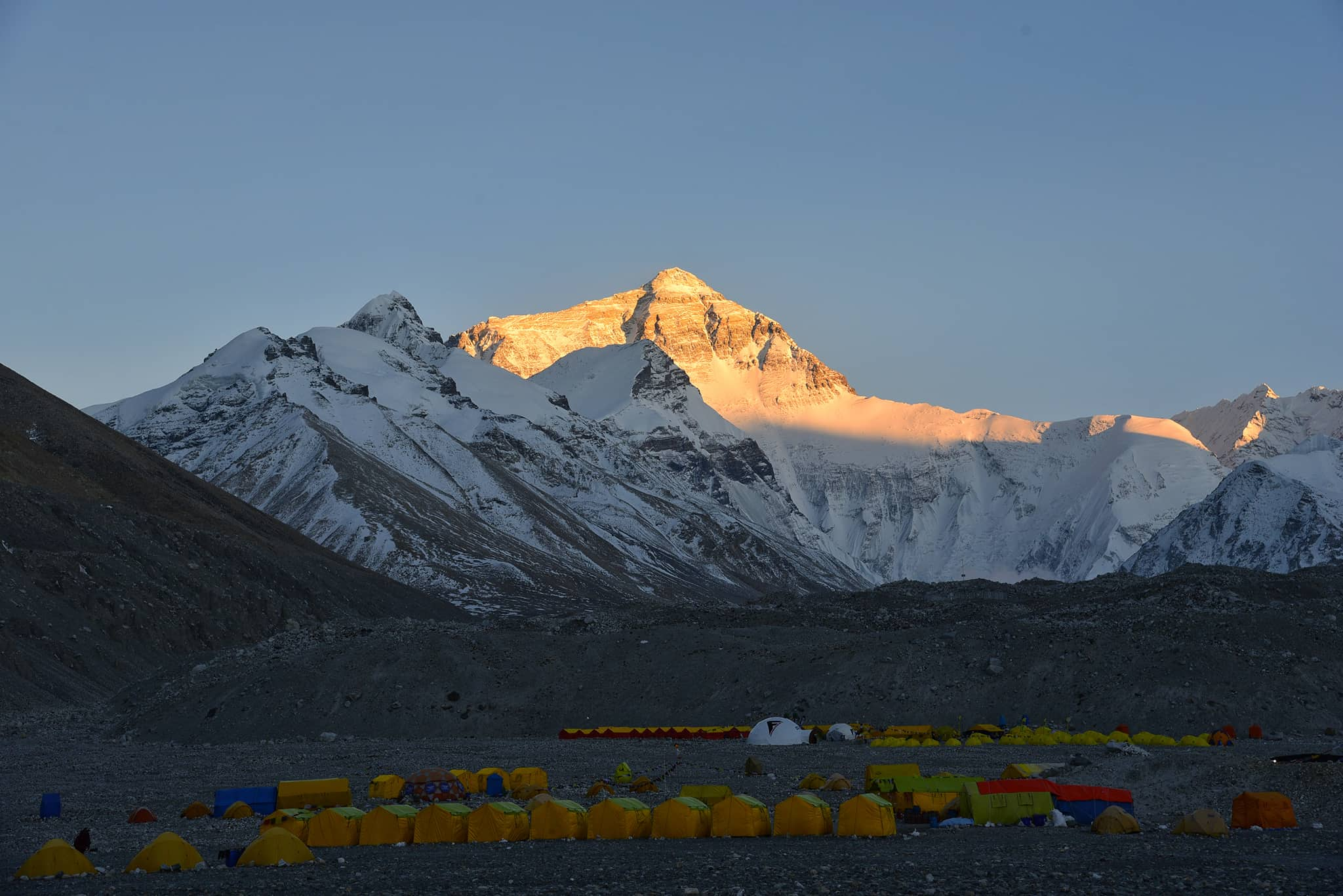 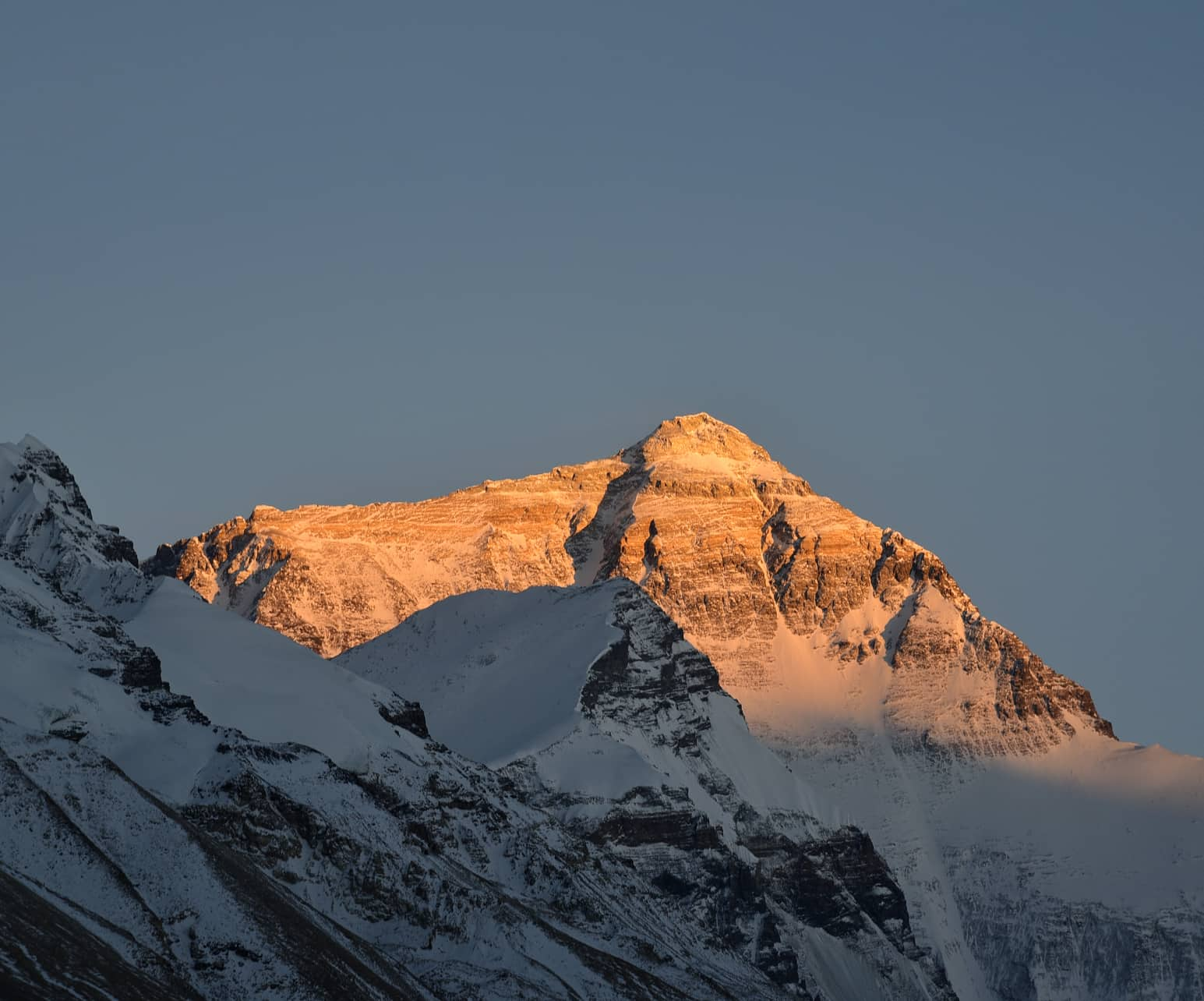 One Response to “Everest 2019: The Jet Takes Over”