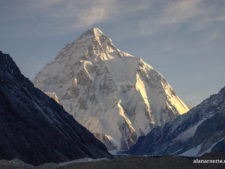 Teams across the Karakorum are making summits and progress during an elongated period of good weather. But with the record climbers on K2, some teams are making serious decisions. And a few special projects are seeing success.

As I mentioned in the last post, Mingma Sherpa of Imagine Nepal has switched from the standard Abruzzi to the Česen route due to crowds. Now it appears that Madison Mountaineering has switched as well. This takes over 50 climbers off the standard route but still leaves about 100 on the Abruzzi.

Our sherpas were to fix to Camp 3 on the Česen route yesterday.  Which is great progress.  And we’ll keep working to fix higher, hopefully, they can reach Camp 4 in the next few days or so.  Our plan is to head up tomorrow morning early on our first rotation to spend a few nights upon the Česen route acclimatizing and getting familiar with the route.  Everybody’s doing great here at base camp.  Beautiful weather and we look forward to more great days ahead!

And Mingma Sherpa weighed in :

The weather on K2 kept us surprising everyday with mostly clear skies which I didn’t experience in my previous 2014, 2016 and 2017 K2 expeditions. Today Madison team fixed the rope to camp3 and tomorrow our team is heading on mountain for acclimatization and fixing route to camp4 which can be expected on Monday if the weather remains stable. Our Broad peak team is heading back to base camp for rest spending a night at camp3. All is going well and expected to go well.

This is both good news and bad news. Yes, there will be less competition for tent spots on the lower part of the mountains, but the route merge below Camp 4, about 25,000-feet/7600-meters so the potential of long waits still remain for the Bottleneck and the Traverse. 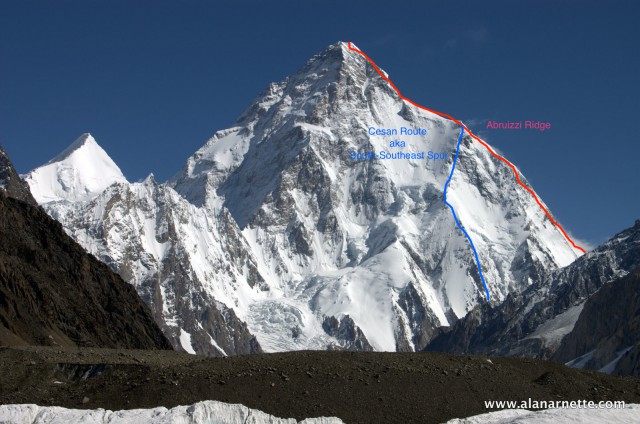 Dawa Sherpa of Seven Summits Treks noted progress on the Abruzzi: “Sherpa will climb to C2 on 6th July, scheduling 7th and 8th for C3 opening”

It was a cold and windy night up at camp 2 but the sun is shining today for our descent back to K2 basecamp!  Once arrived in basecamp, we will rest for a couple of days before setting off for the last part of our acclimatization process: climbing up to camp 3 (7200m) and spending a night there before heading back down to basecamp.

Adrian Ballinger and his team are on the move on the Abruzzi:

The sun’s still shining here in the Karakoram (it’s been an unheard of stretch of good weather for 2 weeks) so it’s time for us to make our first push up high on #k2. Keeping it light and (hopefully) fast-ish, so no wifi and no posting for 4 days. No news is good news! Forced social media detox begins now

By the way, UK outfitter Adventure Peaks is also on K2 this year.

Denis Urubko and Pipi Cardell who are looking at a new route on GII reported: “We start acclimatisation up to G2 and all goes good!!!”

Furtenbach Adventures said their lead guide Max Berger summited but no details. And Eduard Wagner aka Edward Ulysses who has an interesting write up on his site.

Also of note on BP is Uzma Yousaf who is first Pakistani female to climb Spantik peak 7027m, in 2017.  She attempted BP last year. She has done a second rotation to C2.

By the way, I love this picture from Masherbrum Expeditions of “Our Bar B.Q master Mr. Haidar is on his duty at Broad Peak Base Camp .” 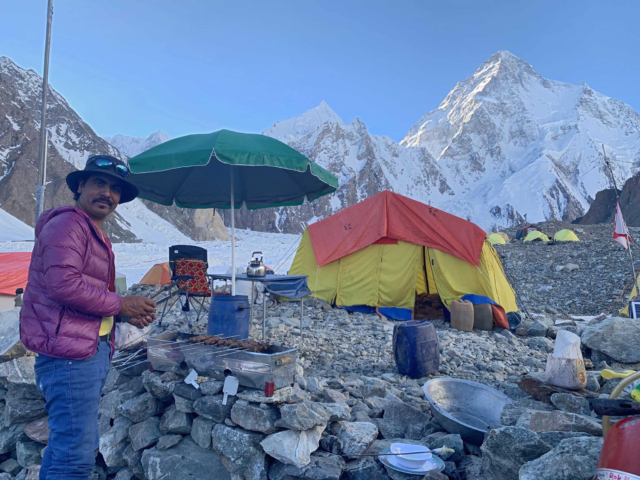 Mr. Haidar on the BBQ on July 4 at Broad Peak Base Camp. Courtesy of Masherbrum Expeditions.

Nirmal Purja summited Nanga Parbat accomplishing seven of his goal of all 14 8000ers within 7 months. He summited Annapurna, Dhaulagiri, Kangchenjunga, Makalu, Everest, and Lhotse in April and May. He now moves to GI/II, Broad and K2. 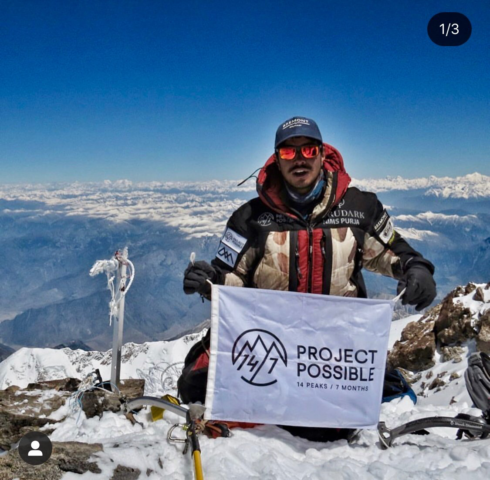 There are more Broad Peak summit attempts underway this weekend.

The Alpine Club of Pakistan posted a new route on the 7788-meter peak, Rakaposhi:

Congratulations to Mr. Kazuya Hiraide & Mr. Kenro Nakajima from Japan on climbing Rakaposhi (7788M) using a new route on South Face!! They attempted the peak in alpine style and reached the summit of Rakaposhi on July 2, 2019.

Simon Messner has made the first ascent of Geshot Peak (Toshe 3) in Bunar valley, Pakistan. It was an acclimating exercise for his main expedition of Muztagh Tower (7276). Congratulations Simon.

On 29 June I did the first ascent of Toshe III (local name Geshot Peak, appr. 6200m) which is located South-West of Nanga Parbat in Bunar Valley, Pakistan. Due to the difficult snow conditions, the warm temperatures and the very unstable weather I decided to climb the mountain in a single solo push from ABC (appr. 4600m). The plan was to climb light and fast to avoid the bad weather coming up and although I had to track every single meter I reached the summit at 9:30 am (needing 5,5h in total).

While descending I was aware of the high avalanche risk which I had to deal with, but luckily everything went well and I could reach the base camp on the same day.So far Geshot Peak was unsuccessfully tried by a Polish and a Canadian Expedition and I am happy for the local people of the Bunar Valley that their mountain was finally climbed. What a hospitality! 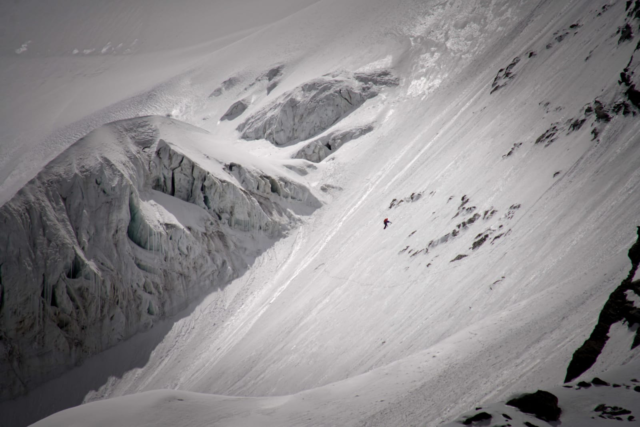