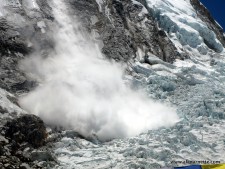 Nims confirmed his last climb of his Project Possible and the remaining teams on Everest leave due to the end of the season and serac dangers.

Everest – And Then There Were None

Madison Mountaineering and Kilian Jornet both fearing the devasting effect of being hit by the trailer sized ice serac a few thousand feet above the Khumbu Icefall when it falls, have officially abandoned their climbs. Their Nepali logistics organizer, Iswari Paudel, Managing Director at Himalayan Guides, confirmed their decision in the Himalayan Times

Yes, I think I’m going to call it off tomorrow…we’re running out of time. Yeah, it was a tough season with the late and heavy monsoon…plus the Serac. Just wasn’t in the cards for us this time.

He posted this picture

Kilian Jornet got higher on Everest than anyone else this season using his speed climbing to reduce the risk of being in the wrong place at the wrong time in the Icefall. He made these comments on his Twitter and Instagram feeds:

This last month I had been in Khumbu valley