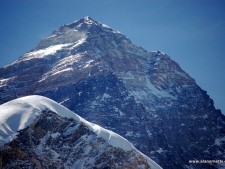 A big part of climbing Everest is the weather. Last week we saw Kami and I caught in an unexpected wind storm on the Lhotse Face at Camp 3. Well last night there was a series of events that made our heads swim here at Base Camp.

Multiple teams had positioned themselves for a summit push starting around 9:00PM from the South Col or Camp 4. The winds had picked up as they climbed from Camp 3 and further the revised weather forecast had them gusting to over 50 m.p.h. Normally the highest acceptable is in the high 20’s. So team after team sat tight wondering if the winds would calm or just create a difficult night for them at the South Col before returning to C2 or lower the following morning.

One team, Himex, ment did re in the midst of the high winds and found their down climb complicated by a collapse of the Icefall on the route. No one was hurt but part of their team had to return up to C1 while the others came back to BC.  For those at the Col, shop around 10:00PM, the wind suddenly calmed. Climbers stuck their noses out to inspect the sky. Base Camp Managers called their weather forecasters around the world and, well, they went for it!

This morning, May 13, there were multiple summits in calm conditions. The picture attached to this dispatch, I took from Camp 1 on Pumori at 8:37AM. While you cannot see them, climbers were standing on top of the world in this picture. It shows a small wisp of wind but nothing serious. It was encouraging to hear the Sherpas in the IMG radio excitedly call into BC with each summit. I believe a total of 10 IMG members, guides and Sherpa summited this morning and more from other teams such as Peak Freaks and Adventure Consultants. Congratulations to all for some gutsy decisions.

Another IMG group of 5 are at the South Col for their summit bid tonight as are several from other teams. So the bids continue. Remember it is not simple matter of saying I will leave BC for my bid because you have to climb to Camp 2, rest, then climb to C3, the South and then make your bid; overall a minimum of 4 days. See the IMG site for all the names.

I will leave BC for my summit bid in a few days and post a detailed dispatch before I leave. Meanwhile I am continuing to rest in Base Camp, make short day climbs to 19,000′ on nearby hills such as Pumori and focusing on health, hydration and maintaining my weight. All systems ready to go!