Reports continue to come in from teams on their steady progress to Everest Base Camp. You can almost feel their pulse quickening from here!

Heavy rain showers kept many teams hunkered down in the tea houses yesterday and today but most pushed on to the higher villages including Periche. Expect a few teams to arrive at EBC- South on Friday. Once there they will take a few days to get settled in before taking their first trip into the Icefall.

Route to Camp 1 in Early

In a bit of a surprise, IMG announced on their blog that the Icefall Doctors have the fixed ropes and ladders all the way to Camp 1. This is the first camp above the Icefall and into the Western Cwm. This is significant in that climbers can start their acclimatization rotations without delay but more important is that the Sherpas can get a jump on setting up the high camps.

The last time it was in this early was 2007. The Icefall Doctors are a dedicated team of 5 or so Sherpas who maintain the route through the dangerous Khumbu Icefall. This 2000′ feet of moving ice is one of the most dangerous parts of an Everest climb in modern times. But in some ways the glacier danger is overrated given the number of climbers who go through each season. The Sherpas will make 15 to 20 round trips whereas the members will minimize their exposure to as few as 4, most will do 5 or 6 however.

Support from the Queen

You think you have supporters? Well the UK’s Walking with the Wounded received this letter from the Queen of England wishing them the on their Everest climb. I assume they were gobsmacked 🙂 They are climbing with Russell Brice’s Himex team. 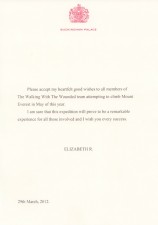 HRH Letter to Walking with the Wounded

Chad Kellogg, the self described speed climber, is back at it with another attempt on Everest. Using the logistics of Willi and Damien Benegas aka the Patagonian Brothers Expeditions. Chad tried in 2010 before stopping just above the South Col and will give it another go climbing from EBC to the Summit without supplemental oxygen. According to their site, his goal is to beat Marc Batard’s 1988 22.5-hour run from Base Camp to summit, and the entire run of BC-Summit-BC in less than 30 hours. He is targeting May 6 or 7th after the route is in and a boot track established.

However, he is off to a dubious start when he stashed a significant amount of his climbing gear under a rock during an acclimatization push only to return to find it missing. But his sponsors came through with an emergency shipment to get him back on track. You can read the details on his blog.

70 year-old Bill Burke arrived in Kathmandu for the first leg of his double summit attempt. He will climb with Asian Trekking on the south then move overland to the north for is second summit attempt.

It’s Who You Want to Know!

Arriving in Kathmandu brings out all sorts of emotions but one is anticipation of perhaps meeting a legend. The Grand Dame of the Himalaya, Miss Elizabeth Hawley is the single source for who summited or not. Her records are the final say for all Himalayan climbs from K2 to Everest.

I remember my first Himalayan climb in 1998. I was told by the clerk in my Kathmandu hotel that I had a phone call. “Who would be calling me here?” I asked myself. “This is Elizabeth Hawley. What is your full name, where do you live. How old are you?” She fired off in rapid succession. Pausing, I gently asked “Who are you again?” With a huff of indigence she simply said “Elizabeth Hawley”. And that was that! I answered her questions politely and hung up not knowing I had just spoken with a legend as famous as Hillary or Messner.

Miss Hawley, now 86, went to Kathmandu some 50 years ago and never left. As a journalist for Time she reported on climbs for various news services and the American Alpine Journal, Climber, Vertical and other magazines. Not only has she earned the respect (and fear) of climbers she is also sought out as a resource on routes and “beta” for the mountains.

Miss Hawley is famous for finding every climber within hours of arriving in Kathmandu and asking unique questions of the climbers claiming to have summited . For example, what other 8000m mountains can you see from the summit? What has been left behind on the summit by other climbers? If you answer wrong, you don’t get credit- full stop!

In her book “I’ll call you in Kathmandu“, author Bernadette McDonald chronicles “Liz’s” life and shows the importance Miss Hawley has achieved in the climbing world – and she has never climb a foot of any of her beloved mountains!

With the assistance of Richard Salisbury, a database analyst and mountaineering historian in Ann Arbor, Mich., her records are available in book and CD form with climbs covered from 1905 to 2011 for the Himalayas. You can find more about this great resource at Himalayan Database. I am honored to be part of her great work today.

5 Responses to “Everest 2012: Icefall Route In, Climbers getting Close”