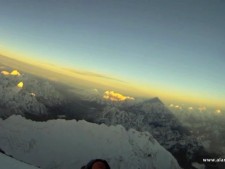 Climbing Everest is all about timing. And a few climbers are proving that they can sneak in a few summits after the masses have left.

On the North, the second team from SummitClimb summited 19 in what was termed ‘high winds’. Part of their team was Leifur Orn Svavarsson, reported to be the first Icelander to summit from the North.

On the South, Manish kumar Deka of Assam, India summited with his Sherpas. They were climbing with Arun.

In the ongoing battle for records, 81 year-old Nepali, Min Bahadur Sherchan, is reported at Base Camp. I have from a solid source that he is strong and feeling well so there is a good chance he might summit and retain his record of a summit at age 76. As you know it was broken this week by 80 year-old Japanese Yuichiro Miura.

He had better hurry as the Icefall is melting out as the days warm up and the monsoons get closer.

For those climbers trying to get home, the nice traditional way (not using a helicopter to Kathmandu!), they are being delayed by the heavy rain both in Kathmandu and in Lukla. Personally, I have both trekked and flown out from EBC after an Everest climb. I prefer the trek as it give you time to wind down and let what happened sink in.

With the season almost over, a few interesting reports are coming out. Double amputee, Canadian but from Nepal, Sudarshan Gautam, 30, summited but fell near the Yellow Band on May 21st. He was rescued using a ‘long line’ from a helicopter. This was a record for an alpine helicopter rescue as it was at 7800 meters. They did not land but dropped a line that was attach to the injured climber.

A report at Montagna.tv says the Nepal Ministry of Tourism and Civil Aviation is considering raising permit  fees as a way to control crowds on Everest:

Once the royalty is increased the number will be controlled automatically,” he opined, adding, “the climbing holiday will have effect on overall Nepali tourism”. “The climbing holiday on the one hand decrease government’s income while on the other will also hamper tourism sector,” Nirola said adding that the raise in royalty is the only option.

Similar reports have been floated in the past with no action.

The deaths of eight, thus far reported, is sadly within the expected range for this number of summits. The highest death toll on Everest was in 1996 with 15 deaths. To keep some perspective, many of the world’s most popular mountains – Mont Blanc, Aconcagua, McKinley, have similar death tolls. That said, clearly any death in the mountains is devastating for family and friends.

Once climbers get back to Kathmandu or home, they often seize the opportunity to document their experience while it is still fresh in their minds.

Nelson Dellis, who climbed on the North with Altitude Junkies, has written what I consider an outstanding report on his experience. it you have been following Everest all season, this is simply a must read for his humility, and honesty. An excerpt from the Blog of the Day

… Once I reached that point (about 8000m—officially in the “Death Zone”). I sat down and looked out at the Himalayan expanse and just started sobbing. I don’t know really why, but I guess at that moment I suddenly felt completely defeated. I thought of all the people I was going to disappoint, especially myself, but I just couldn’t get myself up and keep climbing. What was the point?

Another good report is from Chris Jensen Burke on her Lhotse summit. Bob Kerr discussed his vision problem on summit night.

Georgina Miranda who summited has a very brief pre-report with a paragraph I liked:

… no more than 10 minutes later my friend’s guide managed to recognize me through my oxygen mask and down suit and asked why I was crying and then told me, “you already turned around once 2 years ago, you are not turning around again.” He then talked to my Sherpa, they adjusted my oxygen and he asked me to follow them for an hour and see if I felt better and that I was only 5-6 hours away from the summit. Fortunately, I started feeling better, and at 5 am the sun rose over the whole world and I was filled with warmth and knew that my sign had been clear as day and there was no turning around.

There will be more and I will try to highlight the standouts via posts or on Twitter.