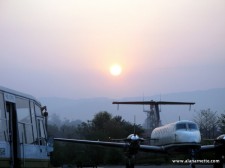 Everest 2014 continues as the climbers who arrived in Kathmandu a few days ago have now flown to Lukla to begin their week long trek to Everest Base Camp. For many, case this is a flight of a lifetime, or at least they hope. 🙂

A few teams will take a helicopter, considered safer by some, thus bypassing all the fun, but the views are the same. And a privileged few will bypass the trek altogether taking the chopper all the way to Gorak Shep missing the point entirely in my humble opinion. As for those climbing from Tibet, normally they drive to their base camp and don’t arrive until mid April.

A few reports are coming in but it is mostly quiet as the first real opportunity to connect to the Internet will be in Namache,  couple of days after flying to Lukla. Those teams posting updates are commenting on the great weather and stunning views of everest and the plume indicating high winds off the summit – normal for this time of year.

Flying to Lukla, now named Tenzing-Hillary Airport, starts early. A 3:00 am wake-up call begins the action. This is early, even by climber’s standards as many have been rushing to get last minute items, connect back home and, in general, rest up knowing what is ahead.

When the phone in your room rings, you are already awake, staring at the ceiling, wondering what you forget to pack, what you forget to say. The anxiety is high. The question now is whether to take a long hot shower, your last for six weeks. Yes, take a shower, wash your hair, perhaps shave – if appropriate – knowing it will be a temporary cleansing.

You packed your duffels, for the fifth time, the night before, but you take one more look to make sure. It really doesn’t matter. It is too late to get anything you forgot. It is time to go. The tiny man who carried your huge duffels to your room is fast asleep so you hoist the bag on your shoulder and struggle down the stairs. You begin to sweat, you start to breath heavily. And you are about to climb Everest. Doubts enter your mind as to your training, your fitness, are you ready?

Now at the hotel desk, you check out. Pay for the laundry so you have clean clothes upon your return. Your bar bill, yes it was too much, but …  All of a sudden, you hear a voice behind you, the tiny man. He retrieves your last bag. You are glad. This time you tip him ten US dollars.

The team slowly convenes in the lobby. Everyone looks asleep. The joker of the group maintains his facade. Everyone goes along, too tired, too nervous to compete. The cattle call comes and everyone goes to the bus, a small bus already loaded with your gear. Driving the quiet streets of Kathmandu, you see the city from a different perspective. It looks clean, quiet, serene. Everyone is quiet, except for the jokester. Everyone ignores him.

Arriving at the Kathmandu domestic terminal, you are struck at how different it is from your arrival. Several other teams also arrive, flying to Lukla. You inspect one another like gladiators preparing for a fight, but you don’t have the energy. You simply smile. Your leader gets the tickets for Yeti Air, Nepal Air, Sita Air and, your favorite, Buddha Air.

Passing through the security, you smile, inside. The metal detectors are unplugged, just a wooden frame you pass through. The guard pats you down. He ask if you have a knife or lighter in your bag. You say no, he searches anyway and pushes you on. Entering the departure lounge, you look for your teammates and take a seat on one for the many nondescript chairs.

The small talk is quiet. Those with cell phones and local sim cards check email, Facebook, send a tweet. Those without, nod off, chat quietly. All of sudden another tiny man swings through announcing something in Nepali. Your team gets up and moves in unison following one of your Sherpa.

Lining up at the door, ticket in hand, you wait, and wait, and wait. False alarm, the weather has shut down Lukla. This drill is repeated four more times. Your 6:00 am departure is now 10:00 am. Then it is canceled.

Returning to the hotel, you crawl back to bed, knowing the same drill will be repeated tomorrow, and perhaps the next day. Your schedule is out of your control and in the hands of the weather Gods, get used to it, this will be your life the next two months.

Finally the Gods are happy and you step on the small plane, a DeHavilland Twin Otter designed for short runways. It is a mainstay for this type of flying around the world. All it needs is 1000 feet of gravel or pavement to land. Lukla’s runway is 1,509 feet.

Lukla is notorious as one of, if not, the most dangerous airport in the world. While paved today, in 1997, cows grazed on the grass runway. When a plane approached a kid was sent to shoo off the bovine from the runway.

But the flight is suspended animation. Every seat is a good seat. if you want to video the pilots take row one, but the s are out any window. The small plane skirts the mountain tops sending cows and goats running along high ridges, their road, dirt paths. The clouds envelope the plane. You wonder how the pilots can see where they are going. You stop wondering.

As the flight continues, it is only 30 minutes but seems shorter, no longer; it doesn’t matter. Your face is pressed against the window, staring but not seeing. You are lost in thought. The Sherpa on your flight are fast asleep some are snoring. You know your place.

You review the safety record of the airport in your mind. You know the facts: the landing starts at a 2,000? drop-off at the end of the runway. If 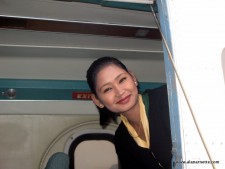 your pilot misjudges the approach, the plane can hit the hillside. There have been many crashes at this airport including one in August 2010 where 14 people died.

The engines begin to squeal as the props are feathered. They are flying your plane. They know what they are doing.  The pretty flight attendant comes through the last time. She passed out cotton to be used for ear plugs in the beginning along with a breath mint. Now she passes by without looking. Another mystery of Nepal.

The Otter takes on a steep attitude heading towards a controlled crash. The runway appears through the clouds. You can feel the g-forces as you slow, then accelerate. You place both feet firmly on the floor as you pull the seat belt tighter. The Sherpa next to you snorts.

With a bang and a loud roar, the Otter lands – one wheel at a time. The engines reverse with gusto. It is loud, Now you wished you had used the cotton, but just as quickly, a low roar takes over as the plane turns right onto a small concrete landing area. The pilots maneuver the plane like a ballet dancer positioning it precisely on the spot marked #3 between two other planes, # 2 and #4.

Just as you begin to breath another loud roar fills the void, the Sita plane takes off filled with trekkers completing their journey. Yours has just begun.

Getting off the Otter, you regain your legs. A controlled frenzy surrounds you as the plane is unloaded and reloaded for the 10 minute turn-around. With the unpredictable weather, the pilots don’t want to waste any time. The engines stay on.

Now at 9,400? it is time to transition from traveler to trekker. From this point on to base camp, it is all dirt paths, no cars, motorcycles, bicycles – just feet and hoof. You have a quick snack at one of the many teahouses in Lukla, don your day packs and head to Phakding or Monjo – small villages nestled in the Himalayas for your first night in the Khumbu. You loose altitude, about 600 feet – the last time this will happen until you descend from an acclimatization climb in a couple of weeks!

For the first time, you feel like your Everest quest has really begun …