This past week, there has been extensive media coverage of a “new” route on Everest. Once again, ambulance shallow journalism has misstated reality. The fact is that there is not a totally new route but rather a small change within the Khumbu Icefall that amounts to about 4% of the traditional Southeast Ridge route being effected.

The BBC is mostly responsible for this headline with their article and other outlets picking it up and simply parroting the story. In the first version, since changed, the BBC article, as I read it, suggested the route would no longer traverse through the Icefall at all. While theoretically possible to avoid the Icefall by climbing from Lhotse’s East Face or traversing the flanks of Nuptse, it is practically impossible for the hundreds of climbers, mountains workers drawn to Everest each year. 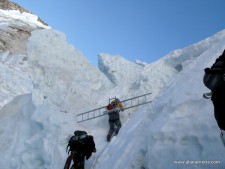 All of the coverage is driven by the tragic deaths of 16 mountain workers on April 20, 2014 from a release of an ice serac off the West Shoulder of Everest into the Khumbu Icefall.

The route is installed and maintained by a team of dedicated Sherpas under the direction of the Sagarmatha Pollution Control Committee (SPCC), Each member pays $600 as part of their permit for this service.

For the last two decades or so, the route went directly underneath the fall line of a serac (the bottom of a hanging glacier) thus increasing the exposure to anyone in the area if the serac released.

The route had migrated towards the West Shoulder from a safer but longer route in the center of the Icefall to accelerate the climb through the Icefall for workers and members alike. Almost every year the serac had released thus the danger was well known, but accepted by most of the workers in order to move faster. Western guide companies, led by Russell Brice, had asked for a safer route for years but their request fell on deaf ears. Brice even canceled his 2012 season based on this danger.

After the 2014 tragedy and with immense pressure from the Nepal Government, operators, world media and climbers, the SPCC re-evaluated the current route and is planning – note future tense – to shift the route away from the West Shoulder and more towards the center for the upcoming 2015 season.

The current estimate is to move the route about 150 feet towards Nuptse and the center of the Icefall from last years position. This may not be far enough if a larger release occurs than last year’s.

The Icefall is approximately 1,500 feet long and the section in danger is maybe 500 feet of that. The total route from Everest Base Camp to the summit is 11,535 feet so we are talking about 4% of the route.

There are few good options for climbing through the Icefall. The center of a glacier moves the fastest and has tall seracs and ice blocks that shift without warning. By moving the route to the climber’s right as seen from EBC, climbers are exposed to avalanches and serac releases from Nuptse. In general, the Icefall is estimated to move 3 feet or 1 meter a day. 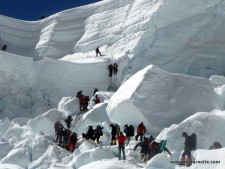 In all cases, the higher one goes in the icefall, the more jumbled and dangerous it becomes. Ladders are commonly used to scale high ice walls.

Pete Athens, 7 time Everest summiter, was interviewed on NPR in an objective, non-sensationalize style. He had recently returned from Everest to work with the SPCC on the proposed route change. Click this link to listen to his interview. He also said:

From other sources, it appears using helicopters to ferry gear into the Western Cwm has not been approved by the Nepal government for environmental reasons.

The modified route will make the climb from Everest Base Camp to Camp 1 in the Western Cwm longer by about an hour according to some estimates.

Finally these stories of a “new” route have provided a platform for those wanting to promote climbs from Tibet. The following table is an objective look at the statics from the Himalayan Database comparing the deaths of hired, their term for mountain workers, who went above their respective base camps and died. This covers the time frame from the first deaths in 1922 on the Tibet side to last year’s 19 total worker deaths on the Nepal side.

So with all this pre-climb publicity, the world’s attention once again includes Everest. The reality is no one knows where the route will be placed until the Icefall Doctors can evaluate the dangers in person. This should start in late March.

20 Responses to “The “New” Route on Everest”