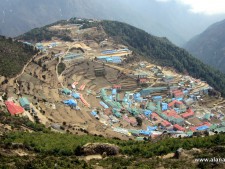 I walked the dirt paths of Namche Bazaar shielded from the rain by three story rock buildings. I was careful not to get gored by yak horns or a trekker’s hiking pole.

I find the cafe I was looking for, the one with Internet that worked. As I walked in, it was dark, a pool table was off to my left. A long table were filled with Brits, Germans, and Americans drinking beer, a large latte or just sitting quietly.

A yak train walked by the windows, their bells clankingly loudly.

The music inside the cafe heaved with bass as Stephen Tyler screamed at the top of his lungs through the ceiling mounted speakers. The Everest Bakery, where I left because their Internet was down, was playing mellow Tibetan chants intermixed with New Age elevator music.

A new lodge is under construction. Men with sharp chisels, hammer away at blocks of white stone, making perfectly formed blocks that will create another wall in this village of stone buildings.

At the Everest Bakery, a young trekker told me his story: quit his job, flew to Nepal, no agenda. As he wrote in his diary, in tiny cursive to save space, he looked up, pausing, then said he was looking for himself.

Down a side street, the ATM was not working, the Internet being intermittent with the heavy rain stopped this luxury at 12,000 feet in remote Nepal.

The Sherpa store keepers were putting blue plastic sheets over their prayer beads, necklaces, bracelets and yak wool scarfs, upset the rain was scaring customers away.

A small store that had two barber chairs was empty on this Tuesday afternoon.

A man with a load taller than he was, tried to navigate the trekkers shopping the stands on the narrow streets. He probably weighed 120 pounds, and his load was probably more than that. He didn’t look concerned.

The lodges are full of climbers and trekkers. The lodge owners say business is a bit down but still good. My own observations is that the streets are teaming with people, spending money, laughing and seemingly happy to be in the Khumbu.

The weather continues to be mostly good with afternoon rain or snow. The temperature seems warmer to me than in my previous visits for early April.

The Khumbu is also teaming with film crews, eager to take advantage of the world’s attention on Everest – for all the wrong reasons.

Today, we took another acclimatization walk to about 1,000 feet above Namache. Tomorrow, Wednesday April 8, we leave for our next stop at Deboche just below the Tengboche Monastery at 12,687 feet. On Thursday we will visit Lama Geshe in his home in Pangboche. I am so looking forward to seeing him again.

The Internet is said to be weak or missing until we get a few villages higher so it may be a few days until I can post again. Thank you for your comments on the blog Twitter and Facebook. I read each one.

Please consider joining ??Alzheimer?’s Prevention Registry. Joining does not obligate you, just provides you the opportunity. Many trails are questions and surveys. Open to anyone over 18 worldwide. 80% of all al trails fail due to lack of volunteers http://bit.ly/1HONXgl