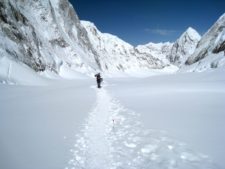 Climbers in the Western Cwm are extending their stays to avoid EBC with the current spat of COVID evacuations. Good weather is allowing climbers to tag Camp 3 at almost 7,000-meters. The rope fixing teams reached the South Col. I expect the summit in a few days.

COVD is Real at EBC

Multiple reports have helicopters taking ten or more climbers daily with COVID-type symptoms. Now, they could be AMS or HAPE but two sources connected extremely tightly to the community but not actually at EBC told me “the situation s much worse than anyone knows in the outside world.” The Nepal Ministry of Tourism continues to deny that there are any cases saying it pneumonia.

A big shout-out to the all-volunteer organization EverestER for their tireless work this season. They are the ONLY medical services at base camp that covers ALL the Sherpas and local people are zero costs. They are funded through donations and a small fee to the foreign climbers. You can support them at the Himalayan Rescue Organization.

COVID cases continue to explode through Nepal with new daily cases well over 2,000 and often 3,000. Authorities have extended the limited lock-down of three districts. Kathmandu, Bhaktapur, and Lalitpur, in the Kathmandu valley for another week. Outbound flight to foreign countries is still allowed.

Climbers in the Cwm

Multiple teams are in the Western Cwm with a few already back from their first rotation. Reports from the Icefall vary greatly. Some say it’s good, located in the center away from the objective dangers of the West Shoulder serac release. Others cite it has a lot of ups and downs a while some are reporting extraordinary long climbs time to C1 such as over 10 hours. it should take five to eight to six on the first rotation.

Snow is expected on Thursday, but not a huge amount as the good conditions persist. And good news, no typhoons in the Bay of Bengal unlike this time in 2019!

A small collapse stalled climbing yesterday but the Icefall Docs got it repaired quickly and climbing continued.

New Route from EBC to C1?

Guides and Sherpas have always speculated on using the flanks of Nuptse to bypass the Khumbu Icefall to reach Camp 1. The Benegas Brothers advocated for this for many years. Now, 69-year-old French alpinist, Marc Batard said he is going to explore that possibility this autumn. He wants to climb Everest next year without Os at age 70. He’s invited Sajid Ali Sadpara, the late Muhammad Ali Sadpara’s son, to come along and also Pasang Nuru Sherpa.

It’s unlikely this will work, but good on him for trying. The slopes of Nptuse are steep, rocky, and as avalanche-prone as the West Shoulder of Everest. The technical difficulty is significant thus Sherpas making “speed” carries to stock the high camps would probably prefer the normal route where they go faster. Of course, it proves viable, it might be an alternative for expert climbers, but not the masses.

Heavy snow on the peak has stopped all progress, including finding the tents at C1 and C2!. Some of the Annapurna summiters have moved to Dhaulagiri but the route fixing hasn’t begun in earnest. There are climbers who have overnighted at C2 but without ropes. Among the climbers is 82-year-old Carlos Soria is on this 12th (yes twelfth) who is at Dhaulagiri Base Camp.

The Slovak-Romanian team lead by Peter Hamor with Marius Gane and Horia Colibășanu has made progress on their attempt the North-West ridge and then descend along the North-East ridge. They’ve fixed the crux of the route.

The permits for Everest surpassed the previous record of 382 foreign permits set in 2019. The Nepal Ministry of Tourism posted these foreign permit tally as of April 23. They have not updated the count in recent days.