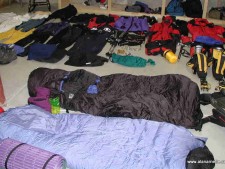 I know many readers are self proclaimed Gear Junkies so I thought a brief review of my gear I used to summit Everest would be of interest. As usual, search these are not endorsements and I always paid for my gear unless noted otherwise. Overall, I used the same items and techniques I have on 30 expeditions the past 10 years.

One more intro note. I tend to use the same clothes day in, day out and week in, week out. Many climbers bring changes for different situations and/or wash clothes often. I don’t. I have my favorites that I know I can count on.

Trek
The trek was on dirt trails that were very uneven sometimes requiring big steps over boulders but nothing technical or extremely strenuous. The temps were mostly mild but were cold in the early morning or after the sun went down, even in the teahouses which were not heated.

I used my Mountain Hardwear Mesa convertible pants but never took the lower legs off. They wore well and never showed the dirt. My top was an Ibex pullover of merino wool with full neck zip. It was versatile for both warm and cool weather plus did not retain odors. I carried a second one in my pack to change into upon arrival to the teahouses each day and reused the other one the next day.

My boots were the Kayland Vertigo High. They protected my ankles on the rough trails and were comfortable. Underneath, were Patagonia capilene briefs and REI merino wool expedition socks for padding.

A key item was my Buff. I always wore it while walking the dusty trails and sometimes inside the teahouses depending on coughs and hacks. I wore a pair of Injinji poly/lycra gloves but they developed holes on the finger tips quickly; still looking for a lightweight glove that won’t wear out. I almost always wore a wool knit cap and my sunglasses were an inexpensive pair of Oakleys.

My shell layers included the Marmot Ion windshirt, which I love for cool temps or breezes and the Patagonia Micropuff jacket with hood – this was my most used item for the entire 9 week expedition. I lived in it and climbed in it because it is warm, durable and lightweight. The current version is the Nano Puff jacket.

In my pack was my computer (MacBook Air), Thuraya satellite phone, solar panel with cords (Feather 20), MSR hydration bag (Dromedary), sunscreen, a few Honey Stinger bars and gels, and the SPOT Locator clipped onto my pack top. I had rain pants but never used them.

I brought my trekking poles but never used them the entire expedition. I had my Patagonia Hoody in my pack but rarely used it finding it too hot or too cold and my other layers worked better. Also I carried my Patagonia Jetstream hardshell for rain or extreme wind but never used it on the trek.

Base Camp Life
Base Camp conditions were a bit cold in 2011 with cloudy afternoons and snow showers. Night time temps were below freezing even in the tents. There was snow on the ground some of the time but mostly dirt and rock.

I wore the same things 99% of the time. I usually wore a pair of merino long underwear bottoms, then the Mountain Hardwear Chugach (now called compressor) pant. This was comfortable and warm. Some people prefer jeans these days at EBC. My tops alternated between zip merino thin tops like I trekked with or a heavier fleece top depending on the weather and smell.

My shoes were lined Chuggs, other wore running shoes. Same knit cap and sunglasses used on the trek and the Patagonia Micro Puff jacket when it was cold and every night at dinner. I had a pair of 40 Below synthetic booties but they did not keep my feet warm.

In my tent was my ExPed down air mattress, which I loved and the Mountain Hardwear  Phantom sleeping bag (0F). I put Nalgene water bottles filled with hot water at dinner plus put my MH Chugach pants at the bottom of my sleeping bag. This helped keep my toes warm.

Acclimatization Rotations
These climbs were on Lobuche Peak (20,000’), through the Khumbu Icefall, to Camps 1 and 2 in the Western Cwm on to 24,000’ on the Lhotse Face. The temps ranged from near 0F to over 100F in clouds and direct sun and on various snow and ice conditions.

I started with the merino wool top and bottom base layer from First Ascent and REI merino wool expedition socks. I lived in my Patagonia Alpine Guide softshell pants. These are lined so they are warm and also protected me from wind and cold. I like their suspenders especially as I lost weight. My top was a heavier merino wool pullover with zipper for ventilation.

Once again, I climbed in my Patagonia Micro Puff jacket occasionally using the Jetstream softshell in very windy conditions. I packed my Feather Friends 800 fill Volant jacket but rarely used it.  I used the Hestra Alpine Pro gloves and they held up well with the tough constant clipping into and off the fixed line; occasionally my fingers got cold.

Again, my head was protected with the knit cap but I now used the Jublo Explorer sunglasses which worked extremely well. My Buff was always around my nose and mouth warming the air as I inhaled.

My boots were the Kayland 8001 (supplied by Kayland) which worked well until the zipper broke on one boot at Camp 2 and on the South Col causing serious problems. We held the boot together with duct tape and string; literally.

My harness was the BD Choas which was easy to put on and comfortable. My BD Raven Pro ice axe was lashed to my pack and almost never used. I wore the BD Sabertooth crampons which were ideal from EBC to the summit.

I used a Petzel jumar and my carabiners were the BD Nirton which have a keylock nose that reduces snags when clipping in and out of anchors as often as I did. My figure 8 rappel device was also BD and was perfect for the large icy ropes over an ATC. I brought a helmet but never used it, a risk not recommended.

Summit Climb
The temp were low, below zero and the winds high; over 30 mph. We climbed starting at 9:00PM, obviously in the dark and summited as the sun rose then descended in the daylight.

My base layer was the First Ascent’s merino wool top and bottom. Then the Mountain Hardwear Power Stretch polar fleece one piece suit. This is an extremely flexible and warm layer that I use anytime it gets very cold. Finally was my 12 year-old North Face down suit. It worked well but recent models have much improved pockets. I was concerned it might not be warm enough so I also wore my Feather Friends Volant 800 fill down jacket. I actually got a bit too warm.

My hands were protected with a heavy fleece liner glove inside my old standby, the BD Mercury Mitt mittens. These were warm and flexible enough to allow me to manipulate my jumar and carabiner. I never wore gloves on the summit push.

I used my Buff and my knit cap over my head and along with the hood on my down suit, my head was fine. I never used my balaclava. I wore Bolle ski goggles which fogged up. I should have bought a pair with fan in them to prevent this. I did use my Julbo Explorer sunglasses on the descent from the Balcony.

I wore the Kayland 8001 boots with Hotronics footbed warmers. The battery gave out about 4 hours into the climb up the Balcony but my toes were never uncomfortably cold.

I carried two liters of water, one in a Nalgene in an Outdoor research bottle parka and half a liter in a thermos and another half in a small Nalgene inside my down suit. A few snacks were in my pack pockets but I never ate them until I returned to the Balcony.

Electronics
I had two cameras, Nikon D50 DLR with two lenses (25-55, 55-200mm) and a Canon G7 which broke. I borrowed another Canon point and shoot for the summit climb but used it little. I took a Contour helmet camera but never used it due to battery recharging issues and use without a helmet.

My sat phone was Thuraya. I rented a Bgan for faster internet access from HumanEdge Technology. My watch was a 10 year-old Sunnto Vector. I kept up with the news via the BBC over a Grundig UHF radio.

I used the SPOT Satellite GPS Messenger to transmit my location throughout the entire expedition including the summit climb. It worked well most of the time but there were periods of blackouts due to inability to reach the satellite. But it was fantastic for friends and family to follow me, especially on my summit night.

I carried everything in two Gregory x-large duffle bags.

Summary
I was pleased with all my gear and plan on using the same basic list for Denali. You can see my complete gear list with more information on this site.  You can download my spreadsheet I used as a checklist here.