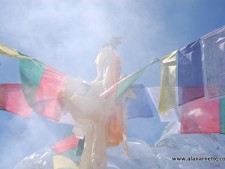 New deaths have been reported today on the North side bringing the season total to 11 deaths.  Also I can confirm the death of a Czech climber, doctor  Milan Sedlacek, He led the first Czech to the summit of Mount Everest. Cause of death is thought to be altitude related or exhaustion.

I have confirmed through a live conversation with Jamie McGuinness of Project Himalaya currently climbing on the North side of Everest that there are 2 deaths with a possible third in motion.

Climbing with Monterosa, a German climber,Ralf D. Arnold, broke his leg at the 2nd step and has died.

And 69 year old Italian Luigi Rampini, also climbing on a Monterosa permit and logistics, is now at his 4th night at 8300 meters without oxygen. He refused to descend a few days ago and is presumed dead. Update: He was rescued per this report

It appears all these climbers with either solo or with limited Sherpa support but certainly without Western guides and climbing as independent climbers basically on a permit with base camp support only.

This first hand report is now posted from North side climber Ferran Latorre and translated from Catalan to English using Google:

Finally comes the moment of truth in the coming days and try to reach the summit of Everest. Will be on 25 if everything goes according to plan. This has been an issue for us long and hard, especially hard in recent days, just in advance of our attack when we needed more rest and peace of mind •. But both yesterday and before yesterday we experienced two very bad days. The news of the death of a climber Tenerife, another expedition member, and the confirmation of the disappearance of the German mountaineer Ralph, who shared with permission, we have deeply dismayed. In addition, Camp 3 (8300 m) is the only climber Luigi seventies, after the two days of waiting and ended with the provisions, to invite him to abandon his sherpa. The Italian has sixty-nine years and with whom we share CB, has decided to wait alone in Camp 3 that came a new opportunity to attack the summit. No radio and no communication these days, only to return last night of his sherpa, we learned what had happened. Yesterday late So we organized a rescue group, led by the Rescue Team of the TMA (Tibetan Mountaineering Association) today try to get there and persuade him to return to CB Advanced. It seems that oxygen but does not want to use, and that it is likely that after three days longer remaining provisions. We fear for his life because, given his stubborn nature and certainly obsessive.

My condolences to all the families of these climbers.

The missing Nepali Sherpa guide who was missing since May 19 reported back to his team at base camp.

This is reposted from ExplorersWeb:

Ted Atkins issued an alert this morning to all climbers shooting for the next summit wave around May 25: “I leave BC tomorrow heading for Lhotse on the 25th,” he wrote to ExplorersWeb. “We know conditions are ‘marginal’ for this route. Topout has issued a number of new Summit regulators out at the request of Summit. Two of these have failed before getting onto the mountain. I urge everyone with Summit regulators to test them before committing to use high. We realize this is late but these failures only came to light today so I have walked to Gorak Shep to get a mail out. The failure rate is two out of a batch of 20, so a check is important. Failing oxygen can lead to increased risk of frostbite and other altitude related illness for climbers not acclimatized for an ascent without the aid.”