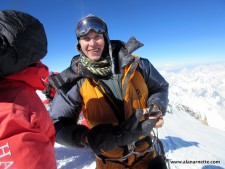 Tragic news of the deaths of my friend Samuli Mansikka, 36, and Pemba Sherpa, 35, while descending from a successful summit of Annapurna on March 24, 2015.

There were 13 summits Annapurna on March 24. Conditions were reported good but avalanches were prevalent as is the case on Annapurna. It is the most deadly of the 14 mountains above 8000 meters with 191 summits and 67 deaths or 35%.

Details unclear but Sammy’s website mentions there was a fall.  He was climbing on a permit from Dreamers Destination which posted this on their site:

25th March, Mingma Gyalje Sherpa (team guide). Yesterday, we all whole team made it to summit of Mt. Annapurna. We had a good weather with little cold wind on summit. On the way back to last camp, we lost one foreign climber and good Nepali friend. Foreign climber was part of our expedition team. We had agreement of giving service in Base camp only. He was climbing without Sherpa (support climber). I don’t how they slipped. We had lot of plans together because they both were good and close friends of mine. May their souls rest in peace and gods give their family the strength to overcome this grief. Om mani padma Hu.

He had made these Tweets from Annapurna:

At camp 4 (7000m) on Annapurna North-face! Spectacular! Last night was terrible with just as much snow inside the tent as outside!

Annapurna showed today that it really is fu..in’ dangerous! Anyway got through the icefall and am now at above 6700m looking at Dhaulagiri!

There’s this one hanging glacier and couloir that wants to kill you! Shoot a fair size avalanche on us today. Didn’t hit but dusted us good!

I climbed Alpamayo and K2 with Sammy. He was on a very successful path to summit all 14 of the 8000m mountains solo and without Os. As I fought to summit K2 with Os, I climbed almost beside Sammy from the High Camp to the summit, him with no Os. I could barely keep up.

He was the President of the Finish Alpine Club and member of the Explorers Club. His competence, sense of humor and grin will be sorely missed by all.

Climb On My Friend,
Memories are Everything
Alan

Update: their bodies have been recovered from 7000 meters per the Ministry of Tourism.

14 Responses to “Death of my Friend: Samuli Mansikka on Annapurna – Updated”