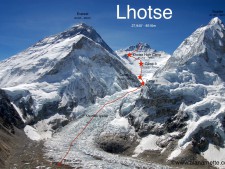 Over the weekend there was good and sad news. The first 8000 meter summit was made on Lhotse and the first 8000 meter death occurred on Dhaulagiri. Teams are being aggressive on Everest with their acclimatization schedules, some already at Camp 3 on the Nepal side a d North Col on the Tibet side.

Mingma G Sherpa lead his Imagine Climb team of two Sherpas and two Chinese members to the summit of Lhotse on the 28th. They had already gone to Camp 3 once for a rotation and on to the Lhotse Y. Mingma is quite the powerhouse these days. He is young, strong, ambitious and determined. As I have written about him over the past couple of years, He started a guide company, Destination Dreamers only to leave and start Imagine. He has a strong Chinese member following and with them have summited multiple 8000 meter peaks over the past year including K2, Nanga Parbat, Dhaulagiri and more. Now that the ropes are fixed on Lhotse, look for many of the 88 permits holders to make a push to the top.

Mingma added that 10 Sherpas on his team had already reached the South Summit aka Camp 4 with a load of oxygen bottles and they now wait for the weather window for the summit push.

A horrific and devastating event near Camp 3 on Dhaulagiri. As his teammate was talking to him, the tent that held Italian Simone La Terra slipped down a steep slope and out of sight after a gust of wind hit the area. La Terra was climbing on a permit with Prestige Adventure was later found dead. The 36 year-old was quite experienced with summits of Shishapangma, Broad Peak, Gasherbrum ll, Cho Oyu and Manaslu. Prestige’s Damber Parajuli, told the Himalaya Times “Simone went missing since yesterday morning after a strong wind blew away his tent. An aerial search was also conducted to locate the missing climber, he said, adding that the search team retrieved his body at a height of 6,100m this morning.”

Nick Rice who is also on Dhaulagiri and climbing friend of La Terra posted these details:

Simone had decided to pitch a tent below the normal place where Camp III is located. He chose a location on the ridge for his tent platform, and as he was taking shelter in his tent, a strong gust of wind blew him and his tent off of the ridge with him inside. Simone fell a significant distance before coming to a stop just underneath a serac (his final location was not known at the time).

Desnivel has an update that his body has been removed and more details:

The accident took place before yesterday afternoon. Simone ascended with the Polish Waldemar Dominic and decided to set up [camp 3 on a snow slope]. Waldemar did not like the site and decided to keep going up. He also did not like what he found above and decided to go down. [Waldemar said that as he] was talking to Simone, who was inside the camp, it slipped (probably Simone had not fixed it firmly) and fell down the very [steep] slope.His body has been recovered this morning under [camp] 2.

The scene of Simone’s body hanging from the helicopter reaching the base camp has impressed us all. Waldemar Dominic was very affected in the base camp by the impression of being talking to a person who at that moment rushes into the void inside the camp.

My condolence to his family, friends and teammates.

Tibet Side at North Col

The Tibetan rope fixing team has the fixed ropes now at 8,300 meters which would be Camp 3 according to Kari Kobler.

The 7 Summits Club has climbers at the North Col as they continue their acclimatization rotations. They posted: “Today Andrey Poliakov with oxygen climb to North Col of Everest with oxygen without any acclimatization with 2 nights from EBC with oxygen.”  Furtenbach has their C1 established but expects big winds to move in: “After setting up Camp 1 on the North Col at 7000m our sherpas carried loads to Camp2 at 7900m. Now they take a rest for the next rotation before strong winds hit the mountain on May 5th/6th.”

Patrick McNight, whom I interviewed before the season start gave an excellent summary of his progress on the Summit Climb team and plans:

We are just wrapping up our post-rotation rest period in CBC.  Things are going well.  All of us are itching to do something other than lounging, eating, and sleeping.  So, what’s in store for us?  Tomorrow, we head up to IBC.  That trip is about a 10km walk up from CBC.  IBC is a yak poop infested area barely suitable for humans….but perfectly suitable for us climbers.  On the bright side, we get to rest before heading up to ABC – another 10km hike.  These hikes can be really tiresome but they are necessary steps to reach most high mountains; Everest is no exception.  Once at ABC, we rest for a full day before we head up the mountain.  Our destination is the North Col once again but this time we will sleep one night there at 7000m.  Now, when I say sleep, I don’t mean a restful night.  We will get what sleep we can manage and then the following morning we will climb toward camp 2, turn around and head all the way to ABC in one push.  Sound exhausting?  Yep, it is.

You might wonder how tired I was after round 1…. well, let me tell you.  I got back to our dining tent at about 7pm – roughly 9 hours after setting off in the morning.  The climb simply exhausted me to the point where I could barely raise a 12 ounce Coke can.  Yep, I was spent.  Mountaineering has a way of exhausting most of us.

So tomorrow begins our second and final acclimatization round.  I look forward to exhausting myself again and getting even closer to Everest’s summit. Thanks for following.  I will post more when we return in about a week.

Even though many teams still need another acclimatization rotation to Camp 3, there is talk of summit schedules. Alpine Ascents now at EBC says: “The next several days will be spent resting and letting our bodies do the job of further acclimatization as we prepare for our second rotation. Things are moving along higher on the mountain and we are focused on working as a team and getting ourselves prepared for a mid to late May summit.” Seven Summits Treks has a team lead by Kami Rita Sherpas seeking a record 22nd summit. They are looking at the summit push the 3rd week of May.

Russell Brice, Himex, has used Lobuche for acclimatization for years now. This reduces the number of rotations through the Icefall for both members and Sherpas. Jacob Schmitz with the team posted this short video from C3. They are back at EBC and ready for their summit push when the weather allows and the ropes are in to the top.

There is talk of strong winds at the end of the week, so look for all the climbers to push hard to complete their rotations and get back to base camps. The next big event will be getting the fixed ropes to the summit opening the gates for member summits. I’m seeing all sorts of talk this year about following behind the rope fixers to get the first summits. Normally, they don’t like to be followed as they are climbing on new ground and kicking rocks and snow down. We’ll see what happens.