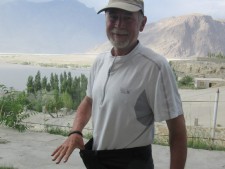 Our team is back in Skardu now after one of the most grueling treks out I have ever made. As I had mentioned, the descent from K2’s summit was as difficult and physical as the up climb.

We only spent one day resting at K2 Base Camp and then trekked 25 miles per day on the Baltoro Glacier for three days, sick or 75 miles. Each day was 8 to 13 hours. My body never got a chance to catch up. I now have lost at least 15 pounds and am extremely tired. Today we took a six hour jeep ride over very rough 4-WD roads from Askole to Skardu.

To be candid, sick I struggled on the trek out still suffering from mild HAPE, extreme fatigue and dehydration. I have yet to get enough water back into my system but will be fine now that I am back in “civilization”

I will post a recap of the summit night as promised plus a full trip report or even write a book on this experience. But for now I want to comment on the fact that much is being made about there were 40 K2 summits this season with some saying K2 is the new Everest and open for “tourist” business.

And the decent is in some ways worse. You must rig rapells (or absell) over and over, each one must be perfect, there is zero room for error. There is a maze of old ropes on K2 that need to be cleaned up. If you choose the wrong rope, and you slip thus weighting the rope, it will break under your weight. You are exhausted, the lack mental focus is very real so mistakes are easy and often. No one can climb for you, you are on your own, totally responsible for yourself; no guide, sherpa, teammates or porter can climb for you. You must be constantly on the outlook for large, as in microwave size, falling rocks that can kill you instantly. Avalanches are a constant threat.

So, K2 2014 is almost over for me. I need time to recover. It took a lot out of me. I don’t want to be overly dramatic, but I went to a place I never knew existed, I pulled strength from unknown sources. K2 tested me like nothing physically, mentally or emotionally in my life. This will take some time.

When I close my eyes I see myself climbing the rock walls of the Black Pyramid, skirting under the translucent ice walls of the serac above the Bottleneck. I see myself checking and double checking my rap device, scanning the steep slopes for rocks, wondering if I fell, how far and how fast it would be until I came to a stop.

I am glad to be down. I am grateful I summited K2 and descended safely. I am indebted to my teammates and support team.

It is virtually impossible for me to raise my arms in victory, uttering that trite expression about conquering the mountain. The only thing I conquered were my own limits on July 27 that allowed me to take my body and essence to place I never thought I would reach. I have no feeling of success, vanquish or celebration; perhaps they will come with time as I give myself permission to feel what comes from a hard earned goal.

On the trek out, I tried to understand what has changed inside of me, what I left on K2. Where to go from here as a climber. I need time to accept the joy of summiting but also to come to grips with the extreme risk involved.

Was it worth it? Yes, without a doubt. I feel good about raising awareness and money for Alzheimer’s. I had fun climbing – full stop. It was a dream climb of climber’s dreams and it was K2. As I scan the 2000 pictures, each one evokes a deep emotional feeling – a good feeling – and I will build on theses.