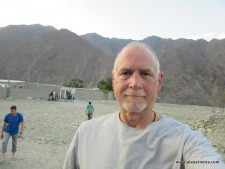 Well the climb is over as I’m actually on my way home. It has been a lifetime experience that brought into sharp focus my passion and purpose in life.

The 75 mile trek from K2 Base camp back to Askole was very difficult on me as I had little time to recover from the summit push plus was suffering from mild pulmonary edema aka HAPE, dehydration and general fatigue. We walked for three days covering 25 miles each day taking 10 to 12 hours per day. Once we left the Baltoro Glacier, the heat was stifling adding heat exhaustion to the equation. But we moved as a team and I appreciated their support.

Once in Skardu, the flight to Islambad dance began. Skardu does not have radar and is nestled in a steep valley so it is visual flight rules. Frequent storms cause the cancellation of flights but the worse part is that PIA is the only airline and has limited flights. With so many of us coming off K2, Broad Peak Gasherbrum I/II there were too many people to accommodate via standby so we were forced to take the bus over the Karakorum Highway (KKH) to Islamabad.

For those of you who have done this, you know it is a grueling journey not made any better by some great scenery as you follow the Indus River.

Our couple of days in Skardu were fun staying at the Concordia Hotel who have great food and nice people. It was like seeing old friends with so many climbers there so the atmosphere was quite festive.  As I posted on Facebook, Garrett Madison and I went for a haircut and shave based on the recommendation of Al Hancock.  It was quite the experience getting a traditional single blade shave from a young Pakistani lad in “downtown” Skardu.

It was one of those totally manual affairs with scissors and sharp lethal switchblade type devices. He had the concentration of a Beverly Hills Housewife who had been scorned by her friend over a bad martini – not sure about this reference …

Anyway, it started with a clip, clip clip of him cutting hair, followed by getting slapped around with his open hand to bring the facial skin alive – at least that is the theory. I was ready to tell him anything.  He used some kind of medieval snake oil to loosen the pores then lathered us up with a horse (could have been mule) brush before taking the blade to our face.

In my case I covered my goatee to indicate “no touch”. He grunted, then scowled, then twisted his mouth in a strange way as he worked around my beard. I found this interesting because EVERYONE has a beard here including the horses, mules, young and old men – but not this guy. I think he is on a one man protest.

He finally took the blade to my goatee itself which was fine as it needed thinning but he went on and on. It has not been this short since I was 4 years-old. Cost? $1.00 each – a bargain!!

The bus ride to Islamabad was a close second in drama. I was a bit worried about this part of the journey as the KKH is known for crashes, murders and kidnappings. But the Pakistani military was in full presence with multiple checkpoints plus jeeps equipped with machine guns highly visible. I never felt threatened my entire time in Pakistan.

The bus ride was something entirely different. Again, as I wrote on Facebook we made it to Islamabad after driving 19.5 hours yesterday and another 9 today in a Partridge Family style bus complete with fringe and heavy red drapes to keep the sun out, we arrived team intact to now figure out flights home.

The music was blaring as we left Askole so I asked for it to be turned down – just like an old man – but was told it will keep the driver awake and prevent him from running off the Karakorum Highway (KKH) into the Indus River.

So making a trade-off between living and watching Bollywood movies, well ….

I got in touch with my inner-Bollywood via repeat showings of a snake handed lady wiggling her hips non stop until an angry young man stormed her only to join in. I am now a convert …

The KKH was packed with security checkpoints, jeeps with machine guns and random security. It was good to know someone was watching over us and not just the bad guys … thanks Pakistan.

We finally arrived at the Marriott in Islamabad and had a real meal sitting in a real chair at a real table – talk about sensory overload. I’m felt like going over an sitting in one of their planters in the dirt just so I could feel at home ….

Seriously, I do finally feel like I am getting back to human shape but need multiple long shower/bath/scrubbing/delousing.

But just as I was ready for that first shower, I called my airline to change my flight and was told the only seats were tonight or wait a week. I was hoping for a few days of doing nothing at the hotel but this trip has kept me going. I got on the hotel scales and in fact lost 15 pounds – more than I wanted to loose.

So now I’m somewhere in the air between Islamabad and Denver.

K2. It gets you coming in, climbing and going out. There is nothing easy about that mountain. But the rewards are genuine. It still has not sunk in that I summited. For some reason I’m not giving myself permission to think about it too much. Perhaps too busy just trying to get home. Maybe it is too good to be true. Or just that is was so hard, I am suppressing what really happened.

But the satisfaction is there. I feel a great satisfaction from all your comments on my climb. You are generous to acknowledge that this old man, at age 58, became the oldest American to summit K2. I didn’t know this was even a possibility until I was at K2 Base Camp …. To have summited on my birthday was amazing.

I won’t rehash the previous blog post, but K2 is not for everyone, it is not Everest and it is not a mountain to test yourself for the first time. It is steep, dangerous, difficult and deadly. I was glad I had the previous climbing experience I did.

Next Steps and Speaking Tour

I need some time to write the summit and overall trip report but please let me say again that I pushed myself in ways I never thought possible. I went on when I wanted to quit, I stayed focused when before I would have surrendered. I left K2 a different person in many ways knowing that when I talk about something being hard or impossible, I really know what that means now.

Thanks for following. Thanks for learning about Alzheimer’s and thanks for donating. It is never too late to continue to make a difference.

I am working hard to do a speaking tour across the US and perhaps selected international cities where I can tell the story of Ida Arnette and Alzheimer’s and how it took her life but changed mine forever taking me to climb the world’s highest mountains.

If you know of an organization that would sponsor such a tour, please let me know. It would be primarily as a fund raiser for Alzheimer’s. If I came to your city, we can climb something together, even if it is to the top of your highest building!!

In catching up on some emails, I was dismayed to read multiple notes from old high school friends who had lost a parent to Alzheimer’s. This crisis is real and we must speak up as world citizens to rally the research community with more funds urgency and action.

Let me hear from you. We are a community in climbing and Alzheimer’s or just friends – and for that I am grateful.