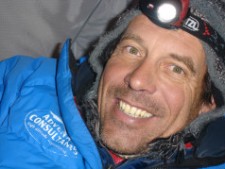 As the guiding universe explodes with seemingly anybody and everybody jumping in, there are a handful of global companies that simply take care of business year in, year out and Adventure Consultants is one of the best.

For close to two decades, Guy Cotter has been running the company with a strong philosophy of keeping it small and safe. Guy is not a figurehead but a true mountaineer. He has summited Everest four times as well as many other 8000 meter peaks and is returning for another attempt on Dhaulagiri this year while another AC team climbs Everest.

I climbed with Guy or his team three times: Ama Dablam, and Everest twice. An Adventure Consultants expedition is well run with a loyal team of world-class Sherpas. Guy prides himself on not competing on price but rather charging what is needed to ensure personal attention to each of his members. He notes there has not been a price increase on Everest in 20 years! 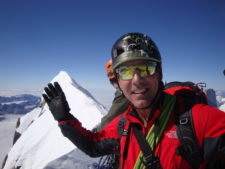 Guy, a native Kiwi, lives on the South Island of New Zealand in the amazing town of Wanaka on the shores of Lake Wanaka. He takes total advantage of everything his country offers from climbing to skiing to mountain biking. Adventure Consultants supports multiple industries of New Zealand by being part of world-class movies and running guided trips to their pristine mountains and ski slopes.

Guy recently penned an article for the AC Blog entitled “Fixing Everest“. He has seen it all from tragedies, to avalanches, earthquakes to wonderful summits and helping members achieve their dreams. But he knows the Everest scene could be improved. Please read the entire post but some of the points he makes include:

The last time I interviewed Guy was in 2013, so I thought it was about time to ask him to update us on Adventure Consultants and his thoughts on Everest. Here’s Guy:

Q: Adventure Consultants seems to be doing quite well these days with New Zealand trips, International and supporting films. Congratulations. This must have been a bit of a challenge to diversify when other guides seem to be focused on only guiding the big mountains. Has this been part of a strategy?

GC: Yes it’s always been a strategy to expand the foundation of the company and not merely rely on Everest and the other big peaks. This has been driven by a desire to offer a greater variety of exciting and fulfilling adventures to our customer base so there is something fulfilling to do after Everest! And if I’m going to be entirely honest it is also because I have a real desire for new destinations where I can spend time getting to know how to operate in a new area or environment. With the amount of operators out there I was very aware we needed to expand the costs of our administration base to keep pricing down and that’s why the price for our Everest expedition has not increased since 1993!

Q: Guy, you were a consultant on 2015 Everest movie, loosely based on “Into Thin Air”. What was your reaction after seeing the final version?

GC: I think they did a very good job on that film and I think the main reason was that they left everybody with their integrity intact and made it a story about the power of the mountains as opposed to picking up on every contentious issue that came out of those events and cramming them into a movie. I thought the visual effects were extremely well done too. I have worked on quite a few mountain films but I’ve never worked with a group of actors like this who were so engaged in doing justice to their characters. There were regular disagreements between them and the director about whether their character should say this, or do that, and I thought they were incredibly professional and I have a great deal of respect for all of them.

Q: Were you pleased with how Sam Worthington portrayed you? Did you give him any hints? 🙂

GC: I actually had very little to do with Sam Worthington as he came in right near the end of the shoot and my role was minor compared to the rest. It’d pretty hard to say whether someone is portraying you well but I think he did a good job of it. When I saw one of the scenes being played out of all the climbers coming off the hill to base camp it sent a few chills down my spine as I had spent the previous 20 years moving on from those events.

Q: You recently published an article on “Fixing Everest”. I thought you made excellent points but the obstacle seems to be the Nepal Government. Can you talk about what you think it will take to implement the changes you recommend?

GC: I think that those of us who have a stake in Everest and care about it need to have an ongoing conversation about what direction we collectively need to take there. Everest represents so much more than just a geographical high point and all mountaineers feel a connection to it. I believe we owe it to mountaineering to manage the resource better so it doesn’t become a freak show (some will argue it already has) and of course we need to have the Nepalese government supporting positive change. Whether that can happen without their usual knee jerk  random decision making that is driven by spin as opposed to good management remains to be seen but first we need to develop workable strategies between the people who work and play on the mountain.

Some of the changes I suggested are already being implemented. The SPCC has instructed the icefall doctors to open the mountain a lot earlier. This alone will make a huge difference by avoiding the trend towards a very short summit window that has generated crowding issues. I believe there are enough intelligent passionate people, local and foreign, who are intrinsically connected to that mountain who have been pushing for positive change for some time and while there has been a lot of focus on the negative I do believe there has been a lot of positive. I still feel that the main challenge is the number of under-resourced teams on the mountain who have large groups of under qualified members with the lowest level of supervision.

As I mentioned above we believe that if the rope fixing can be achieved earlier and groups can summit throughout the entire month of May then there will be no crowding issue. It’s not rocket science. 500 people spread over 15 days is 33 people per day on the summit as opposed to putting that many people there on 5 or 6 days.

Q: I understand you will be on Dhaulagiri. How many 8000 meters peaks have you now summited? And can you give us a brief overview of your Dhaulagiri plans? 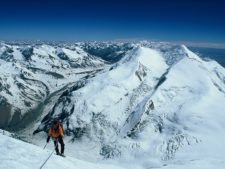 GC: I was last on Dhaulagiri in 1998 with Ed Viesturs and Veikka Gustafsson when none of us made the top so I’m really pleased to be heading back there with a group this season as it’s such a beautiful mountain. We have a group of 9 climbers and 12 Sherpa and I’m working with Dean Staples who, after 9 Everest summits, is stoked to be climbing somewhere new. Deans partner Lydia Bradey is also climbing with us and I’ve got my old friend Lhapa Dorje Sherpa leading our Sherpa team so it’s a reunion of sorts! I have been fortunate to summit Everest 4 times, Lhotse, Makalu, Manaslu, Gasherbrum 2 and Cho Oyu and if I’m lucky I may get to add Dhaulagiri to that list.

Q: I also see that Suze Kelly, long time AC office leader, will be on Everest as a climber. You were both on Everest in 2015 when the earthquake hit. How did this year’s effort come about? 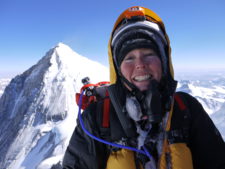 GC: Suze has always been climbing and achieved the summit of Lhotse in 2013 and was with me on Everest at Camp 1 when the earthquake wrecked its destruction. She is going back this year to what is mostly familiar territory because as you know Alan it’s the same as climbing Lhotse except you turn left from the top camp for the summit day to climb Everest instead of turning right for Lhotse!

Q: Finally, a lot is changing in the world of guiding but AC seems to be consistent with a excellent member satisfaction and safety track record. Can you share with us your top three priorities for an AC expedition?

GC: As an IFMGA guide I’ve always focused on safety as the primary objective and I have attempted to design every expedition to be a reflection of how I would want that expedition to be run for me if I was a team member. Top three priorities? Safety, having fun, summits.

Q: Any other thoughts on the world of guiding and AC in general?

GC: I consider myself lucky that I have people regularly tell me that the experience they have just had in the mountains is the best thing that they have ever done in their lives. Not many people get that kind of reward in their jobs so I feel fortunate. I really enjoy the social aspect of the career I’m in and I actually get satisfaction from having to meet challenges I never thought I’d have to deal with.

When we face extreme challenges we learn a lot about ourselves that we’d never have the benefit of learning if we hid from risk and diversity. I also feel fortunate to work with a group of extremely talented and passionate people in our attempts to deliver exceptional experiences to our members and my company could not be what it is without the input of these people. To foster a positive and enthusiastic work environment is one of my greatest satisfactions.

Cheers Alan for the chance to comment on your blog

Have a great season Guy. Adventure Consultants’ Everest and Dhaulagiri teams will post dispatches on their website