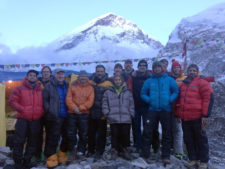 Base Camp on the Nepal side is quickly becoming lonely as many teams left in the cold dark early morning hours of Wednesday 17 May, 2017. A similar pattern is occurring on the north, but several left yesterday.

10 or more teams left Everest Base Camp on the Nepal side this morning. I estimate 200 people (foreigners and Sherpas) on the move today all to Camp2, so we may hear a comment or two on waiting to cross ladders in the Icefall. See the location table for details.

While this may seem like a lot of people, Everest is a big mountain – on  both sides 🙂 and can handle this many people. On May 21, 2011 when I summited, I was the fourth person on the summit from the south side and 125 people summited that day. I never waited a moment up or down.

Also, as I have detailed before there has been a 30% attrition of foreigners due to illness, and personal issues that has reduced the south side from a record year to a big year.

The sense of excitement is palpable, even over the internet, but more so when you talk live to one of our climbers at Everest Base Camp.

I spoke live with my climbing buddy Jim Davidson as he sat in his tent preparing to leave in a few hours. He sounded strong, calm and confident. He is with the IMG Classic team. You can follow Jim on his Inreach.

Jim told me before he left this morning:

I am still in Everest base camp, on Day 57 of this trip. Phew, what a long journey. The 57 days have been long. The 40 years have been long, since Dad first directed me to the polar and exploration section of the Concord Free Public library and I started reading Everest books.

It is hard to believe that there are no more training, workouts, skills development, practice sessions, workouts, ramp up peaks, intermediate goals, or rotations left until I get to try climbing Everest. The time to climb Everest is actually here!

James Brooman, also with IMG is climbing without supplemental oxygen. He has shown that he is a smart, strong climber. He posted today:

I am both excited and nervous. The big boss here rightly noted that the only reason to be nervous is if you are unsure of what you are doing. At least for me – without Os – I am also stepping into the unknown above 8,000m. I should perform well up there, but who knows. The final couple of hours was just described to me as ‘crippling’.

I’m not scared, just worried that I might not perform as well as I want, or be physically unable to make it. In any case, I’m going to give it every single thing I have. Everything else is out of my control, so I’m focused only on what I can control.

The Summit Climb team on the Nepal side are a bit ahead of every and moved to Camp 3 on the 18th, this should put them on the summit early Sunday morning, 21 May – if the weather is kind. 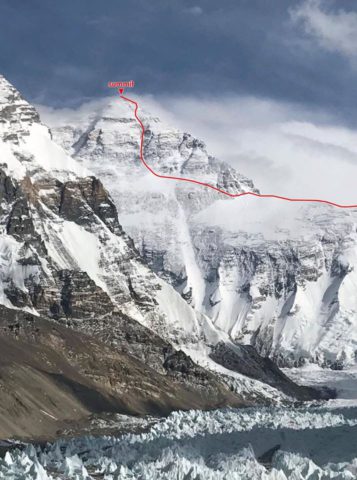 Nobukazu Kuriki announced a major change in plans. He had been on the north side aiming to climb via the Supercouloir but will switch to the south and attempt to summit via the West Ridge to the Hornbein Couloir, the same route that almost took his life in 2012.

He obviously is not satisfied with taking the standard routes on either side. He plans to summit on 23 may.

7 Summits Club’s Alexander Abramov said their two teams are well on their way:

Today, our team had a rest – 3 days resting at base camp – once again emerged from the base camp towards the summit. Plan: climb to the summit on 22 May. We are now at 5800 Zawtar – ABC. Now Sergey Larin with three participants in the camp 7800 meters. Tomorrow they go to 8300 and in the night – in the assault.

Other teams are also on the move,  but a couple are holding tight for a couple more days. Remember on the north side climbers can climb into June unless the monsoons create bad weather. The difference is no large Icefall on the north side that becomes more unstable as the temperatures warm into June.

In a strange twist, some climbers who flew to villages in the Khumbu to rest up before their summit push are now stuck there unable to get back to ECB and join their team for the summit push.

Fog has shut down helicopter flights in Namache and Lukla. Personally I never went down valley to “touch grass before the summit” fearing catching new bugs from new people, but honestly, I never considered not being able to get back due to bad weather! Hopefully they will get back today or tomorrow.

We’re trying to get out of this place and back up the hill for a summit push but the fog has set in and there have been no helicopters flying in or out of Lukla or Namche today. Feels like Groundhog Day. The same song plays on a constant loop in the background of the Barista Cafe. One by one each of us go off in a tantrum about one thing or another. At least we take turns.

We’ve had a good rest break here and I now feel like I’ve recovered from a lousy stomach upset but we want out bad.P Please someone lift this fog and let us get out of here. 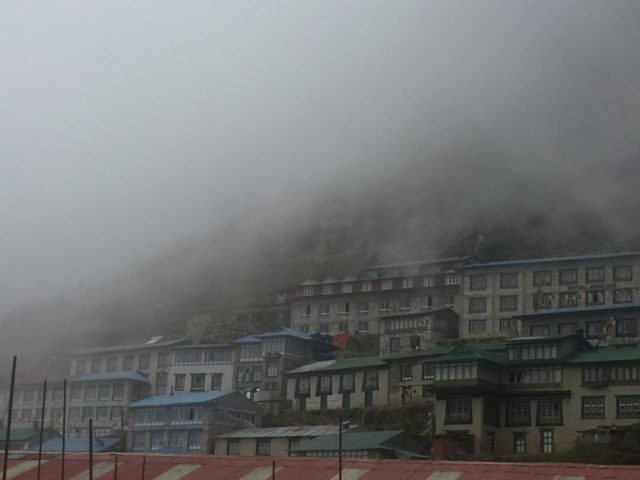 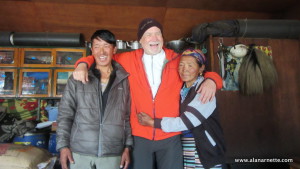 Many of my long time readers know that I summited both Everest and K2 with Kami Sherpa plus we went thru the 2015 earthquake together, standing side by side in the low clouds with avalanches crashing off Nuptse and Everest into the Western Cwm, the ground shaking under our feet.

Obviously I deeply care about this man, and his family.

Kami was severely injured in 2015 on K2. A basketball sized rock came careening down the steep mountain just below Camp 1, about 20,000 feet. His left shoulder was dislocated forward, his forearm broken as was the little finger on his left hand.

Through your generosity, over $12,000 was raised to help Kami with medical expenses and to rebuild his home in Pangboche that was damaged by the earthquake.

I was supposed to climb Dhaulagiri with Kami this spring but my own ‘incident‘ in Colorado brought that to an abrupt halt. I am very grateful to Mingma Sherpa, Dreamers Destationation, for bringing Kami onto his Everest team. He is at Camp 2 on the summit bid as we speak. This will be something like his 16th summit of Everest. He will be back on K2 this summer. 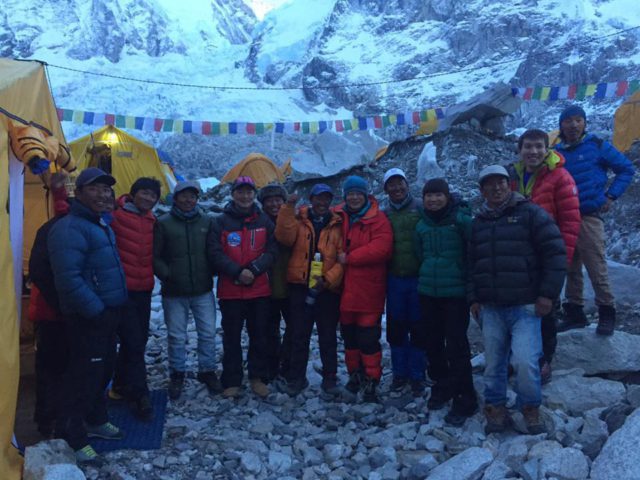 A Wild Ride Ahead

The news that the Hillary Step is “gone” generated a lot of comments in my last post. In some ways it will make it easier to reach the summit. The bottlenecks should be shorter and those with minimal rock climbing skills will be happy. for some, however, it will be a bit disappointing given the Step has been part of climbing Everest since 1953.

The winds are on track to calm as the monsoon builds in the Bay of Bengal. This usually pushes the Jet Stream to the north, away from the summit for a few days or longer. But as we have seen this year, there is nothing normal about climbing Everest in 2017.

OK, tighten your seatbelt, put your tray in the upright and locked position. The next week will be a wild ride for us at home, and even wilder for our friends and family on the mountain.