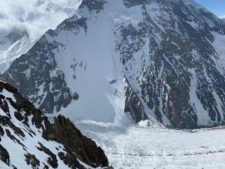 The weather on K2 is revealing a kind side for a change. Low winds, little snow and acceptable temperatures have dominated the conditions for the past 10 days. How long this will last is anyone’s guess but for now, no one is complaining.

There is talk about a lot of snow above Camp 4 and it’s giving the climbers serious pause. Eduard Ulysses gave his usual solid update noting the conditions:

On Abruzzi route, the ropes are fixed up to Camp 4, on Cesen route the ropes end about 500m below Camp 4 it seems. Here it will probably take some days until the Sherpas can continue. So at the moment there is some tendency we will go up via Abruzzi route instead of Cesen (as originally expected) as we can hope here to advance faster. But then again, we need to wait for the ropes to be fixed from Camp 4 to the summit, or at least we need support for the tracing. It seems that often there is a lot of snow above the Bottleneck and it is pretty much impossible for a small team to do the tracing on their own as we would get stuck and might have to turn around.

That means that we now have to wait a bit to see when the rope fixing / tracing continues and how we can best fit in as a small team with the big teams. As most of us want to go without supplemental oxygen we have to be careful not to get stuck behind the rope fixing team or slower people as this is usually a no-go without supplemental oxygen, especially during the night. So we still have to figure out our speedboat-strategy. I will keep you posted! But for now quite surely we will not start before the week-end, if at all.

And Mike Horn on the Abruzzi noted the snow conditions as well:

Here is another pic that I took from camp 3, looking up towards the summit of K2. Here we can see the shoulder we need to overcome on our way to the top of the mountain. The shoulder is about 600m above our tent, at 8000m.
.
Making our way over the shoulder will be one of our biggest obstacles on this expedition thus far. As you can see, there is a lot of snow, making progress very difficult and the risk of avalanches very high. It will be crucial for us to make the right call at the right time when we approach this step.
.
So far, we are very happy with our progress, but we are aware that the bigger challenges are yet to come. As we make our way higher, the oxygen level continues to decrease, and the dangers unavoidably increase, resulting in slower and more steady progress. With every extra meter gained in altitude, more effort needs to be invested for shorter distances. But we won’t be shied by these difficulties, on the contrary, we are here to overcome them, while always being as careful as possible! 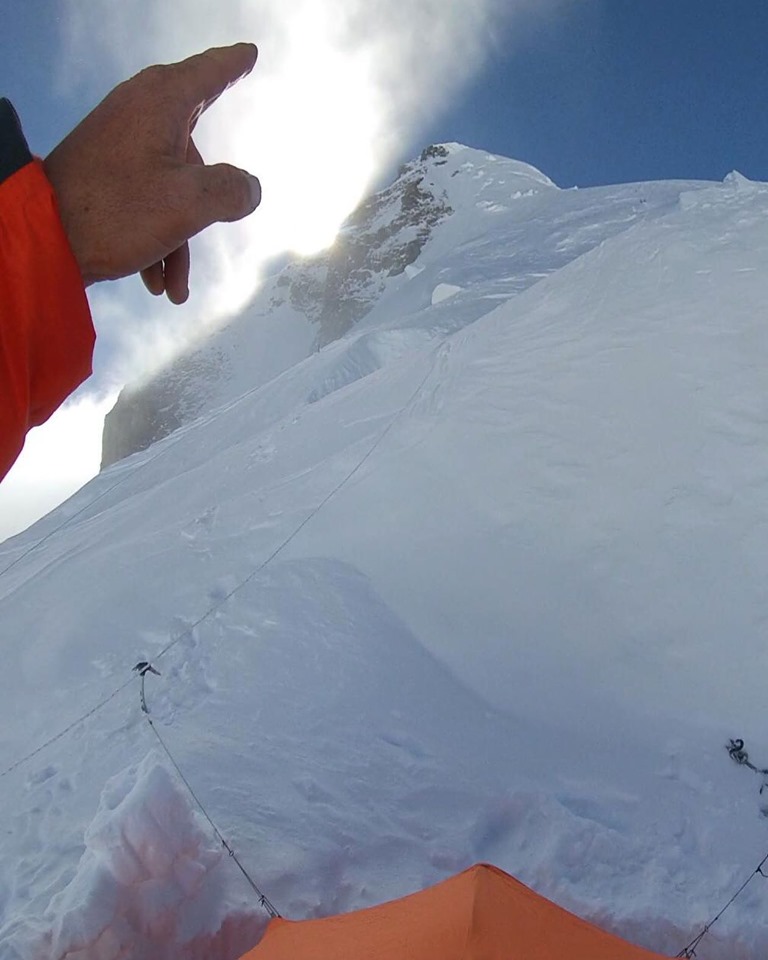 As I’ve noted before both routes, the Abruzzi and the Česen merge at Camp 4 around 25,000-feet/7,600-meters so the work being done to fix both routes yields benefits by spreading out tents lower on the mountain and reducing potential rockfall from other climbers but once it comes time to go for the summit, we may, may…, see some serious crowding issues with close to 100 people. Hopefully there will be several days that will allow the teams to spread out. The first team will handle the responsibility of fixing the rope from C4 across the Bottleneck, the Traverse and on to the summit and then the other teams will benefit from their work. 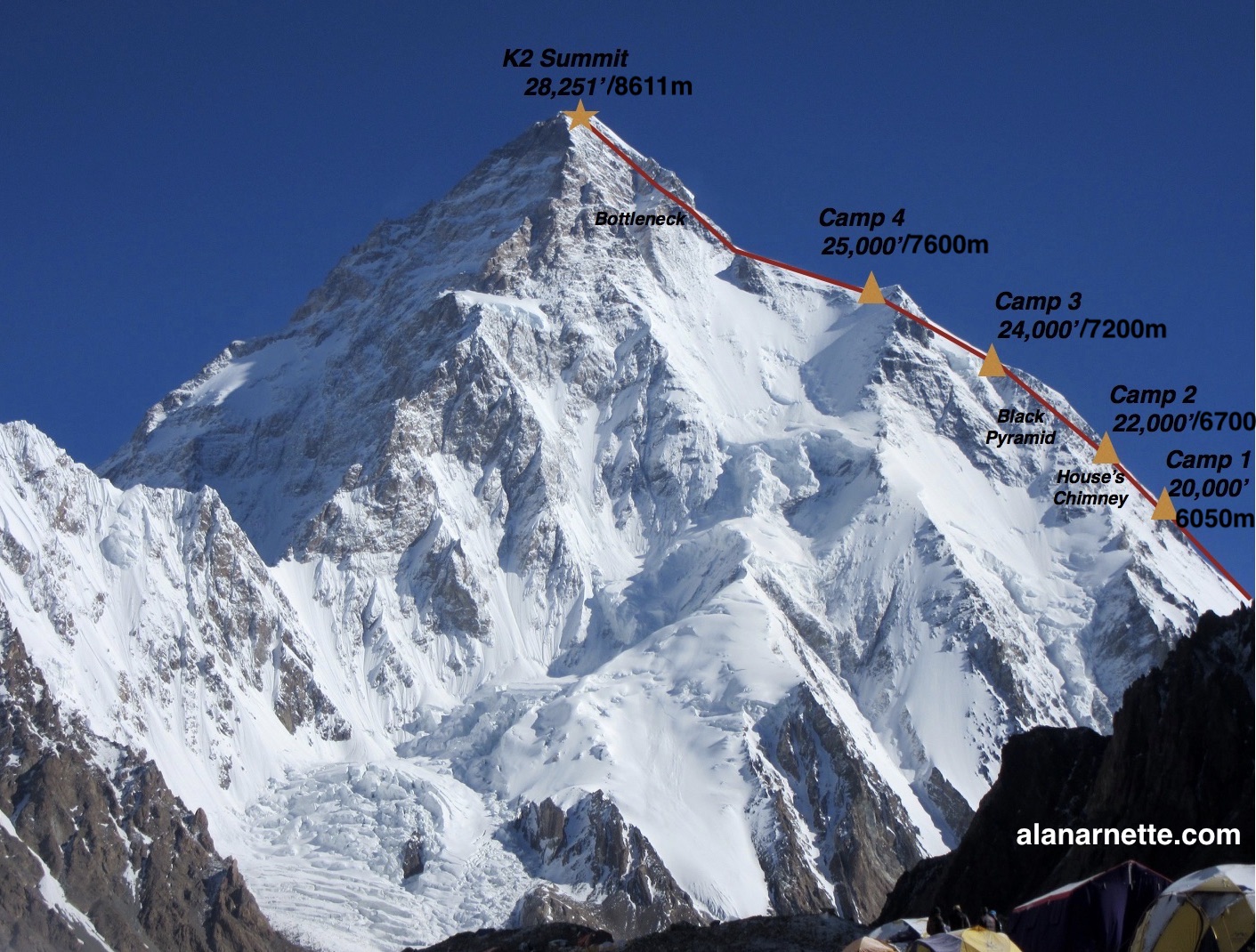 Adrian Ballinger and Carla Perez started off on the Abruzzi but have switched to the Česen. The just spent 6 days up high as they are preparing their bodies for a no O’s summit attempt later in July. AB posted:

Let’s just start here… down from a six day acclimatization rotation including a couple of nights up at 22,500 feet (6900m), Camp 3. The climbing on our chosen route, the Cesen, is stunning. Steep, exposed, airy, and, for the most part, safer than I expected. But the best part of the rotation – following the footsteps of my friend and new @eddiebauer teammate @carla.perez.ec. Her strength and joy at being high on #k2 shone through the pain and suffering each and every day. We are down resting (and I need it!) but I know she is already chomping at the bit for round 2!

Today is July 11th and we had a rest day today in base camp.  Everyone’s doing well here.  We resurfaced some tent platforms on the glacier and a few of our members, Victor, Rick, and Louis are still up at Camp 2 – coming down later today.  And our Sherpas are pushing up to Camp 4 and heading back to Camp 3 this evening.  So, all’s well here on K2!

A stunning image posted by Garrett: 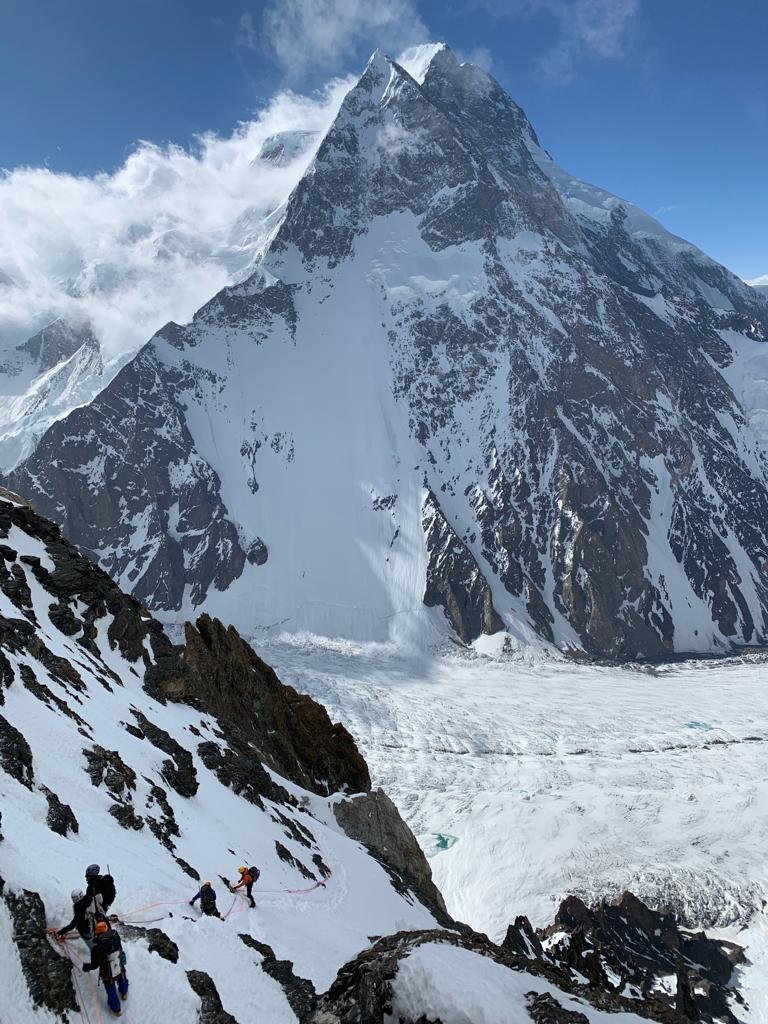 View from the Cesen on K2. Courtesy of Garrett Madison.

Mingma Sherpa posted their BP team is on the their summit push:

Our team just started summit push on Broad Peak from Camp3. Tobias from Germany, Hari from USA, Sirbaz from Pakistan, Pemba Tshering and Phur Galjen Sherpa from Nepal are in team. K2 team is now back to base camp for final rest before going to summit in next week. Good Luck to Broad Peak team.