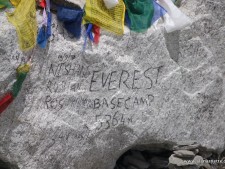 One of the most difficult parts of a long expedition is being away from home when something important occurs. The attack at the Boston Marathon yesterday is in that category.

Typically one climber hears about an event during a phone call, medical or email from home. The news spreads quickly. If the event happened in their hometown, the anxiety is overwhelming. They want to be there for their family, to give and receive comfort. But they are on a mountain.

Feelings of guilt are common, but it is difficult to just pick up and leave, so they continue.

Today, climbers continue to get ready to begin their first rotations to the upper mountain. This will continue all week. A few teams are already starting, so a mixed bag of activity to report on with this post.

Home away from Home in Tibet

Just like everyone has a favorite restaurant that serves the “” food, climbers also become fans of their teams. Most major operators provide a large three person tent for each climber. This allows room to spread out and for some personal space as well. There is always a large group dining tent with a long table, tablecloth and folding chairs; and a heater. And usually some kind of other group tent, again with chairs, sometimes a sofa (inflatable) and perhaps a video screen for watching movies.

Even though this may sound luxurious, it has become a way for operators to separate themselves from one another.

Edita Nichols does a nice job of describing her setup at the Altitude Junkies Base Camp in Tibet. I must admit, it sounds nice with large individual tents:

To avoid clutter in the tent, Phil erected a storage tent where we can keep all gear and items we don’t need right away in that tent.  I made my tent as spacy as possible.  I already like it and spent a bit of time getting away from everybody and enjoying time with myself. Our lifes are so busy back at home, so I am taking this opportunity to just be with myself, listening to the wind outside and contemplating Chomolungma right in front of me….

Nelson Dellis piles on with more praise for the Altitude Junkies camp and an observation on seeing Everest from the north side:

… there was the mountain in all of its glory. The first thing I said out loud when I saw it was “Holy crap, it looks bigger than I expected!” Seriously, it looks monstrous – bigger than in any photo I’ve ever seen.

We’ve got 2 recreation domes with recliners in them – 1 for chatting and one for reading/resting. Then there are a number of big tents: 1 for dining, 1 for Sherpa dining, 1 for cooking, 1 for Sherpa Cooking, Storage tent, then a female bathroom and a male bathroom (equiped with a pretty comfy toilet seat and propane heated shower). Luxury at it’s absolute finest. Looking around at the other camps, it looks like we have it pretty darn good. I had my first night’s sleep here and it was pretty decent. Phil has all our tents lined with foam carpeting and that really seems to keep the temperature inside the tent at night pretty toasty

The Junkies team will be acclimatizing at Chinese Base Camp until the weekend and then head towards Advanced Base Camp.

Not to be left out, Bob Kerr with Adventure Peaks took a field trip and reported on doing some caving:

We descended from Base Camp to a small monastery 3.3 km away. At this monastery the lama performs the rituals and last rights of monks that have passed away, including for the nearby Rombuk monastery. He showed us the underground area where the ceremony is performed.

We were priveleged to be taken through this cave system. I’ve not heard of any other Everest expeditions ever visiting these caves. It was a dry cave with plenty of crawling along the ground, maneouvering oneself to go down holes and scramble up sections. Throughout the cave there were signs of the holyness of the place. It was great fun caving here, but you certainly felt the altitude during the time in the cave. The cave was cold and it must have been a challenging time for the monks when they were hiding from the Chinese.

On the South side, most teams remain in adjustment mode taking time to run through a training course set up in the bumps at the foot of the Khumbu Glacier. They will practice crossing ladders, using their jumars and clipping efficiently on and off the fixed rope around anchors. The US Air Force team has a nice picture on their blog of the training.

The IMG sherpas did another big push today to Camp 2, carrying 29 more loads up there. Also today, we sent Camp 2 cooks Pema, Tashi, and Thile Bhote, along with Phunuru and 11 sherpas to Camp 2 to start setting up four big kitchen and dining tents and many smaller sleeping tents. Their plan is to work on Camp 2 for a couple days, then drop down and set up Camp 1 tents in preparation for our members.

Most teams will have a smaller version of Base Camp at Camp 2 on the South and Advanced Base Camp on the North. Tents will be shared but there will be a dining tent and cooking tent. It is amazing to think about this at altitudes above 21,000 feet.

I like the update from Mike Chambers describing his first meeting with his personal Sherpa:

Upon arriving at base camp I was greeted by my Sherpa climbing partner, Decha. A 29 year old father of two from the village of Phortse, Decha has reached the summit of Mt. Everest five times. When not scaling the world’s highest mountain Decha is also a competitive marathoner and has completed the Everest Marathon three times in the top-five. Decha has a handsome, compassionate face, one that elicits the “where have I seen you before” reaction. When I reached out to shake his hand he smiled and gave me a big hug and just like that our friendship was formed.

A Personal Sherpa is one who stays with the climber throughout the entire expedition. Usually, they only do a few carries for group gear to the higher camps. Their number one priority is to climb with their charge, oversee the acclimatization, provide some guidance and bond before summit night.

As the Sherpas continue to climb almost daily to Camp 2, they are getting a close-up look at the Lhotse Face. This is critical as last year it proved to be very difficult with loose, falling rock in unusually dry conditions. This year started with reports of good snow coverage however with high winds.

Reports are now becoming consistent that are probably creating some worry amongst expedition leaders.

Tashi Sherpa, our team sardar has been up and down the mountain several times to Camp 2. He reports that the ice-fall is so far in good condition, no extended double ladders and nothing significant looming overhead and so far no towering chunks have developed that can collapse, so that’s all good news. However it can change as things start to warm up, that’s all typical stuff we watch while climbing here.

The Lhotse Face, hmm.. it looks like we may have to consider the traverse away from the section prone to rock fall again this season. We really don’t see the snow here that we were hoping for. There was a good dump just days before the climbing season kicked off here that sounded promising when we heard about it in Kathmandu, but it appears to be gone now. It’s actually quite dry looking up there again. We could use some more for sure to glue things together better.

We already spent few days at Base Camp. It seams that this year is much dried than last year. At the same time we have many more people trying to climb the tallest mountain in the world. We been working hard already with other teams to make this a safe Everest season.

Again, time will tell what route they will take up the Face as well as the true conditions.

Kenton Cool, the UK climber who took Olympic medals to the summit last year is now leaving the UK for his climbs this year. Colin Wallace, who follows British climbers exclusively, sent me this overview of the Empire’s climbers this year:

The British have a long history with Mount Everest and again this season they will have teams present on the mountain. Dream Guides will see Kenton Cool going for his eleventh summit and Jagged Globe guide David Hamilton will be aiming for his seventh summit, both via the South Col route.  On the North side of Mount Everest Altitude Junkies guide Phil Crampton is looking at bagging his sixth Everest summit while David Tait is joining Himalayan Experience to get his fifth summit while raising money for charity.

Best of luck to all this year.