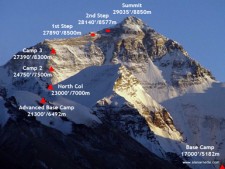 Update 6: Looks like about 100 people went for the summit from Tibet on Sunday but not all teams have reported. There were many comments about crowds preventing fast climbers from moving around slow ones. Weather was expected thus the season may be over, but for 2014, I have learned never to say closed ….

The controversy around Jing Wang’s summit continues. She refused to discuss the use of helicopters but in a report today said she did not use a helicopter disputing the statements of her organizer and the helicopter pilot.

According to Wang’s application stating her itinerary from May 9 to 23, she used the chopper only to airlift logistics, equipments and two sherpas (a porter and a guide) to Camp 2, Burlakoti said. “We are ing detailed report from the Civil Aviation Authority of Nepal and helicopter companies about the flights made in the Everest region,” he added.

Earlier in a post-summit interview with THT, Wang had refused to provide details of chopper use, claiming she had crossed the dangerous Icefall route several times. But Da Gelge Sherpa told this daily in Namche Bazaar that he had flown with Wang to Camp 2 from the Base Camp on May 10.

The Nepal Ministry said it would review her proof of a summit before issuing a certificate. She is anxious to fly to Alaska to summit Denali before the end of June in order to make her objective: speed record for the 7 Summits plus both poles.

Update 5: I’ll update the summit stats from the north as I get them but I want to say this now:

I am now writing the #Everest 2014 season summary and will post in a week or so, but this is a troubling season on many levels.

Too many death, so many shattered dreams, a devastating intersection of labor vs management with no winners. Too many are using this season’s tragedies for their personal and professional agenda, spinning it to their own benefit.

This is not what mountaineering is about. Everest 2014 – Nepal – has tarnished decades of honorable accomplishments, so many achievements that so many are proud of are now hurt by the actions of a few and the policies of a government.

Lost in the noise are the accomplishments on the north side of Everest – from Tibet – Bill Burke at 72 and Poorna Malavath at 13 and many others summited. They had a dream, young and old, that they never lost.

Dreams are meant to be fulfilled. If you are dreaming of Everest don’t let 2014 discouraged you. Your dream is what you make it, no one else. Ignore the voices, listen to your own, fulfill you dream.

Update 4 May 25: Reports of more summits on Sunday including Adventure Peaks and Summit Climb. Very little detail. No word on the Romanian team but bad weather is now reported moving in.

The Himalayan Times is reporting that Cleo Weidlich from Brazil but now an American citizen was helicoptered back to Kathmandu from her attempt to summit Lhotse after flying into the Western Cwm to Camp 2. The report says she abandoned her attempt. There is no mention of the two Sherpas who were reported to be with her.

Cleo posted the following on her Facebook account in sharp contrast to her provocative comments before leaving “ I refuse to give in to the pressures of the Everest mafia.”

A lot has happened since I stopped by. I came down to Lukla today and was shocked at all the speculations regarding my Mt. Lhotse climb this season. Firstly, I’d like to assure all my fellow climbers around the world who are pursuing all of the 14 X 8000m+ that I could not, in good consciousness, claim a summit when I took a heli to C2 after the tension that took place in late April and a heli out today. That would be claiming a whole mountain when, in fact, I’d only have climbed half of it.

I would like to let all my climbing mates around the world know that I respect everyone’s effort and I’ll continue to pursue the 14 X 8000m+ peaks by fair means as I have thus far. BC-summit-BC

I did a lot of filming and photo shooting of the glaciars and hanging Seracs and will present to the ministry this week to illustrate the seriousness of global warming on Mt. Everest.

Again, I apologize to all whom I might have offended by fliying to C2. I never intended to claim this summit.

Another update on Jing Wang from an interview with her with National Geographic as she returned to Kathmandu. None of the Sherpas had summited Everest. She made this statement about her summit with respect to the fallen Sherpas:

She said she was very sad about the death of the Sherpas killed in the avalanche, but she had made extensive plans to climb all seven summits (the highest peaks on the seven continents) in six months.

It was reported her helicopter flight was authorized in contradiction to statements by the Ministry of Tourism only 10 days earlier.

Further it is reported by National Geographic that Wang made a $30,000 donation to local hospitals.

First up around 6:00 am Poorna Malavath a 13 year 11 month old girl from Hyderabad climbing with Transcend Hyderabad became the youngest female to summit. Anand Kumar Sadhanapally from the same team summited at 7:26 and kishor dhankude summitted at 10.30 am

There are many more summits Sunday morning but we will have to wait for the teams to report them.

Update 2 May 24: Many summits early Saturday morning Tibet time.  Dr Atanas Skatow from Bulgaria with Asian Trekking summited plus others but no names at this point. 7 Summits Club, who performs year in, year out did it again with 15 on top. This from their leader Alex Abramov

Hello! This is Alex Abramov. Today we have a great event. The first team – in strong wind and snow, reached the summit of Everest. They were on top at about 7 am, with a gap of about half an hour. All seven members, seven Sherpas and guide Noel Hanna were on the summit of Everest. Now they go down. Surnames : Vasya Kernitsky, Zygmunt Berdyhovsky from Poland, Derek Mahon from Ireland, and Russian – Anton Seleznev, Sergey Dmitriev, Denis Abuev, Vlad Lachkarev. All now in the process of descent from the top…

The no O’s team of Peter Hamor and Horia Colibasanu posted this:

Horia and Peter reached 7,600m today *** Strong winds prevented them from climbing further, so they are descending *** No other no-O2 summit attempt this season *** Horia brings home a successful attempt on Shisha Pangma (8.027m), on April 30.

At least two other climbers are attempting Everest without using supplemental oxygen this season including Ralf Dujmovits and David Klein. They are on their summit push now.

The Maltese team is at C3 leaving Saturday night as is the Romanian team and many others.

Update 1 May 23: Bill Burke at Camp 3 on the North side reports there were summits on Friday Night from the north from the Asian Trekking team. There are many more as several teams were on their push leaving Friday night. We will have to wait for them to updates us with names however.

The first summits of 2014 came unexpectedly from the Nepal side. While all the commercial teams plus most of the independents left after the April 18 deaths of 16 Sherpa, a few teams stayed at Everest Base Camp trying to find a way to climb. The Nepal Government kept giving assurances that the mountain was open and the Khumbu Icefall would be maintained. But few believed them.

Jing Wang, owner of the Chinese outdoor gear company Toread, was on track to set a record for the 7 Summits plus both poles. With seemingly unlimited funds and amazing ambition, she was refused a permit by the Chinese to switch to the North after the South side deaths then pressured her outfitter Russell Brice to find a way for her to summit Everest this year. Brice said no (see his post). His entire team of members and Sherpas had already left.

But Wang was unrelenting and she found her way reportedly on a filming permit. Then she found 5 climbing Sherpa and 2 cooks willing to fly into the Western Cwm to Camp 2, bypassing the Icefall and the dangerous crevasses of the Cwm. It is reported to have taken over 20 helicopter flights to get her set up at Camp 2 – each costing at least $2,000.

And on May 23 at , she and her 5 Sherpa summited. It’s unclear how much line was fixed but it is known the Sherpa  fixed the Hillary Step. She was on a permit with Excursion Himalaya. Update: It is now reported she left the South Col at 9:00am and summited at 6:20pm.

Comment: While this may be the latest Everest summit in history, not sure of that, it is not all that dangerous if the weather holds. We climb to the summit in the dark, so down climbing, while a bit more dangerous due to fatigue, is not out of the question.

The other climber refusing to give up was Cleo Weidlich from Brazil but now and American citizen. She was to attempt Lhotse and also flew into the Western Cwm. She was last reported at Camp 3.

Meanwhile, many teams on the north are at the High Camps, some have left for the summit. Winds are reported to be acceptable. As I noted the other day, Michael Fagin is seeing an increase in winds and moisture for late Sunday so this is a short window.