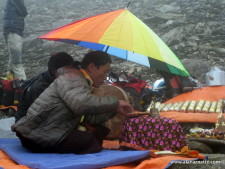 There is a reason Everest is more popular in the spring than in autumn. The success rate is 66% in spring and 33% in autumn for the world’s highest peak. In the beginning of the autumn climbing season, discount the end of the monsoon creates instability and then every day bring winter closer with short, colder days along with the threat of snow.

But in the middle, it can be spectacular. 2015 seems to have a bit of everything. Teams on the high peaks this year are making progress but continue to get stopped by heavy snow, and surprisingly, exceeding hot temperatures. Avalanches are common, as is rain.

Let’s look at the mountains with climbers who are posting updates.

This 8000m mountain has 106 climbers, the most of any Nepal peak this autumn. Manaslu is known for unpredictable weather with long periods of rain at base camp and heavy snow up higher. Teams thread the needle when a good forecast arrives knowing they may go up only to return to the safety of base camp half way up.

We had a good acclimatization round on Manaslu, but Manaslu showed her true face: lots of snow, thunder, hot weather, wind, everything! We suspect a period of really bad weather now and hang out in Base Camp for a couple of days.

Russell Brice commented that there are five more climbers than last year but the on-mountain cooperation is better.

Last evening we were fortunate enough to have practically all the Mountain Guides from all the teams on Manaslu visit our camp to compare their various weather forecasts. We had German, Austrian, French, Japanese, Canadian, and New Zealand guides in attendance. The consensus was that all weather forecasters were unable to accurately predict the amount of precipitation that we would receive in these next few days, that we would have relatively good weather for today and tomorrow, but that we will then be receiving a reasonable amount of snow in the following days. There are 5 more members on the mountain than last year, but there appears to be a much better unity between teams this year, and ambiance seems to be much more relaxed …

The Adventure Consultants team made it to Camp 2 for an overnight rotation and is now back at base camp with this report on their trip up:

While a light snowfall greeted us at 5am when we awoke to prepare for our trip to Camp 2, it was the intense heat that was the main meteorological phenomenon we were forced to contend with as we made the ascent today. Probably the most technical section of the entire climb; the challenges on this section of the climb involved scaling ropes up almost vertical ice walls, climbing over ladders across yawning crevasses, and extreme heat that, along with the higher altitude, sapped the energy levels significantly.

Greg Paul, climbing with Himex, is doing a great job of documenting his experience. In his last post he commented on what it takes to climb Manaslu:

We got to BC at around 11:15 AM. By then the sun had heated the upper slopes and avalanches were happening every minute. At first we would stop and watch but then they became too commonplace to bother watching. Lunch was ready when I arrived BC but I did not have an appetite given it felt like I just completed an endurance race.

Russell was happy that we completed this rotation with two nights at C2. Now we are ready for a summit push. I looks like that will not happen until another 5 to 7 days as a storm is supposedly heading our way. So it is back to the mental game of “hurry up and wait”.

The only team on the world’s fifth highest peak (27,825’/7828m) made a fast re after heavy snow hit them. Adrian Ballinger posted:

Camp 3 – 24,500 feet. The mountain won this round. Actually, the mountain wins every round. And today it felt ok to be beaten. We didn’t summit today. In fact we didn’t even make it to Camp 4. But with waist deep snow up high, fresh avalanche activity, can’t-see-your-feet whiteout conditions, and enough snow in base camp to collapse our dining tent, I’ll take with thanks all of us back off the hill safe and smiling. It’s time to play the 8k waiting game.

The only climber on Everest this autumn, Japanese Nobukazu Kuriki, is now doing rotations through the Khumbu Icefall. His blog says he is at Camp 2. But the Himalayan Times reports he will try to reach Camp 3 on Tuesday September 22, followed by C4 (South Col) and a summit attempt on Thursday. This would be very surprising to me, and risky as Kurii has only acclimatized to 20,000 feet on Lbouche.

History shows that anyone attempting Everest without supplemental oxygen makes multiple acclimatization rotations eventually reaching 8000 meters (26250′) or the South Col on the SE Ridge route. They return to base camp then go for the summit. By only being acclimatized to 20,000 feet and then to go straight to the summit would be ill advised, at .