From the C3 of Everest I send all my strength to Carlos Rubio Infante Muñiz great companion and friend who has had to be evacuated to a hospital in Kathmandu because of a lung inflammatory process. He is stable and I know he is fine, but from here we miss him a lot, since he has worked like a champion and I am really proud of him. Tomorrow we will ascend to equip the C4, for all the force he has transmitted to us. In short, this dream would not posible, without you Carlos.

Rubio posted this update from Kathmandu on You Tube:

In the text were these details:

Carlos has been up four nights, two in the C1 and C2 two who came very touched energy. His situation worsened to the point of almost not able to walk. Well down the Khumbu icefall was unthinkable. Why Alex made the decision yesterday after rate him and talk with him, that had to be evacuated. One more night could have been fatal at this altitude (6,400 meters) in winter, and with such a small group.

In addition, the weather is not easy to fly the helicopter but, luckily, was the only day when the wind stopped yesterday.

The helicopter arrived with the last light, and pulled by the hair. Luckily for today blows very strong again, so maybe it could not have come up.

Please visit Tixkon’s blog for a nice selection of pictures as they set the route in the Icefall. 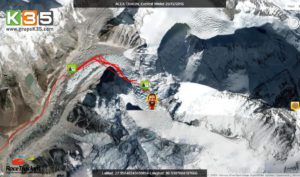 You can follow his movements from his GPS tracker .

Txikon is 35 years old and is joined by Aitor Barez, the expedition movie director and Pablo Magister who will serve as cameramen.

Look for Txikon to spend a night at Camp 4 or the South Col, just under 8000 meters. This is the usual acclimatization schedule for anyone attempting to summit Everest without supplemental oxygen. He would then return to base camp waiting for forecast of a week of good weather for the final summit bid. This is expected to occur in early February.

French alpinist Elisabeth Revol has ended her attempt on Manaslu. She noted deep snow on 13 January but little since. Fellow french climber Ludovic Giambiasi has plans to climb with her but only to Camp 2 at 6,400 meters. They had reached 7300 meters.