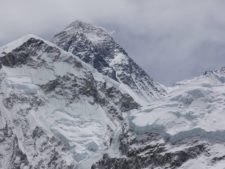 The Everest season has turned tragic as scores of climbers summit on the south side and more are on their way. The fickle weather of 2017 has finally calmed calling to the climbers to finish their quest.

There have been deaths on both sides. While few details are provided, it appears these were associated with altitude, not weather.

Meteorologist, Chris Tomer, told me just now that the good weather we discussed over the past few posts will continue with one exception:

Looks about the same from my vantage point…jet streak arrives on 22nd with wind flare. The earlier they summit the better

This is what has been reported by expedition operators to the Nepal government and then to the press. Families are usually notified by the companies before going public.

and Ravi Kumar is reported missing after getting separated from guide at Balcony. A search team was dispatched hours ago.

The previous two deaths were:

I posted this yesterday along with a summary of the Sunday morning summits and it is more valid today as we are now at the historical average of deaths:

This is part of Everest. Each year, on average, around 6 people die. This year has been safer than normal thus far. The common causes of death include altitude related illnesses – complicated by poor decision making when symptons first appear. In other words, turn back immediately upon any sign of altitude sickness – this is known by everyone but followed by few.

The summit pushes thus far have reported cold temperatures and there have been cases of frostbite. Guide are reluctant to talk about this as it reflects poorly on their leadership and decision making. Also it is not surprising for a guide service to have a death and never report it publically.

All this just re-enforces that every climber should come to Everest self sufficient with proper experience, knowledge and judgment to take care of themselves in any circumstance. To depend on others is to ask another human to take responsibility for your life, something you would never do at home, so doing so at 28,000 feet is simply silly when it can be avoided.

There are probably 150 climbers headed up right now, around 11 pm 21 May. They should start summiting around 4:00 am Monday morning. Weather is reported still good but there are reports of one large team clogging up the route. As I discussed in How to Mange the Crowds on Everest, now is the time to be strategic.

While deaths will occupy the news, we need to remember that are hundreds of people climbing and they could use our positive energy.

I wrote this now for my long time climbing buddy Jim Davidson. You can follow Jim on his Garmin InReach:
You are on your way my friend.

It looks like you left the South Col early, that is good this means you should summit just as the sun peaks over the horizon between 4 and 5 am early Monday morning!

You leave the South Col, Camp 4, and climb the Triangular Face, it might feel steep. You are probably in a line of the climbers, relax – slow-simple-steps. Your breathing is slow and steady. All you hear is the sound of your own body bringing the oxygen in; releasing it a rhythm that will be your friend for the next 8 hours. It is dark, your headlamp lights up the white snow against your green Lowa boots.

After 4 hours you will reach the Balcony. Sadly several people died over the last 24 hours in this area so you may see a dead body. There is nothing you can do but take care of yourself. Focus. Take a break. Sit on your pack. Let your breathing slow, let your heart rate slow. Drink, eat the foods we discussed. Look around. It is a clear night. Look up, with no moon, you can see every star ever created – at least that what it feels like.

Getting up, slip your pack back on. It holds your lifeline, your oxygen bottle, food and water. Adjust your oxygen mask, your headlamp, clip back into the fixed rope and start walking. It is easy leaving the Balcony. Your crampons are getting good purchase on the hard packed snow. You follow the rope, and the boot path.

All of a sudden the angle increases. Your slow pace slows down even more. It is OK, this is as it should be. You are where your should be. You and yourself in a line of climbers – a high altitude ballet with slow, thoughtful movements – all in unison, all sharing a common goal, a shared vision. The snow gives way to some rock. This is the Southeast Ridge. No problem Jim. How many times have you climbed with crampons on rock?

You have been moving for over five hours. The angle on the Southeast ridge eases a bit. You can see the lights of Camp 4. You look behind and see line of headlamps, ahead it is the same. All of a sudden, it gets real steep. Hey! Your pause a moment to gather yourself, rest, and then take another step. You are moving with your feet, not pulling on the rope. The steep section ends as quickly as it start and now you are on the South Summit. Another huge milestone and time for a break. You know the drill, drink eat, allow your body to relax, allow your mind to be free.

Leaving the South Summit, you descend. What? You are going down? Yes but not for long. The wind picks up a bit as now you are on the ridge line leading to the summit of Everest. The booth path from previous climbers marks the trail. All of a sudden the terrain becomes narrow, car width. You glance both left and right – all you can see are drops of thousands of feet. Focus. You move on with purpose. A small rise is ahead. No this is not the Hillary Step but one of several small bumps. Focus.

The route steepens once again. This is the Hillary Step. No rock climbing needed this year. You already heard the part of the Step had collapsed from the earthquake or erosion so you follow a 50 foot snow slop the leads to a long rise ahead. You are now minutes from the top of the world.

Your heart begin to race. The excitement builds as you get closer and closer. You want to see the summit. You look up from the steady 100 yard stare that has been your pal for the last 7 hours. You move you head to the left, looking for the summit. Nothing but snow. To your right are cornices. A new sensation comes into your being sunrise. A tiny yellow line emerges on the eastern horizon – sunrise. You feel better, much better. The sun brings on a new day. You take another step and another.

You feel like you are in limbo, a place between here and there. You have been in auto mode for the last few hours. Your mind focusing on short simple steps, breathing, staying clipped into the fixed rope. You have not thought too much about the summit but more feeling the wind will pick up, you will see another body. Yes, your mind has been empty and full – a strange contradiction the comes with altitude. And with this, the terrain eases a lot.

You look up. Your eyes come into focus. You see prayer flags, lot’s of prayer flags. And you see people, many people – all covered in brightly colored down suits, hugging, waving, laughing, smiling, posing for pictures – it’s a party on top of the world!!. It is the summit of Mount Everest. Your shoulders ease. Ha! You have had them tight for the last hour. And with one more step you are there.

The descent is fairly straightforward but you are very tired and all the excitement is gone. Mistakes come easy. Many death do occur on the descent. It usually take about 4 hours to reach the South Col or Camp 1 on the north. Many teams will try to get to Camp 2 on the south and the North Col on the north. The lower the better.

We are in the crux of the season. As predicted the weather is looking good.  Let’s end this post on a good, positive note.Furtenbach Adventures told me today they had 100% success on the north side on perfect weather – “zero wind”. Also that German climber Andy Holzer became the second blind person to summit.

Today at 7.10 in the morning, all participants were at the summit. Windstill and -26 degrees.

Rise without traffic jams, hardly any other people on the road. Thanks to our super meteorologist, who prognosticated us this weather window. The team has returned to C3 and will be off to the ABC tomorrow.

A great performance of the Sherpas – THANK YOU !! Congratulations to everyone !!