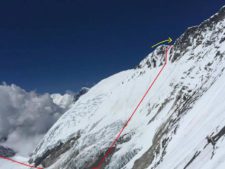 As I posted in almost real-time, there were many summits on Monday morning on both sides and there were some surprises!

The Russian team 7 Summits Club lead by legendary Alexander Abramov put more on the summit. I have lost count but believe it is over 20, maybe 30, including support:

Like an hour ago, said Alexander Abramov, today, 22 May at 4:30 am Nepal time the whole team reached the summit of Everest. Successful descent guys! At 6 am Moscow time all were already in 8300 and continued the descent. Peaks reached Valery Tebiev Daniel Briman, Eugene Kravt, Aznaur Akka, Alexander Abramov (in the 8-th time) .

Transcend continued a very successful season with a male/female team including Aparna Prabhudesai from the city of Pune, India, an entrepreneur, marathoner, social worker. Good on them for naming their Sherpa support:

A summary of our Team 3: 6 climbers and 6 Sherpas made it to the summit, while one woman climber had returned before the summit. They had reached the summit between 5:20-6:45 a.m. local time. The Sherpa Guides that made it to the summit are: Tenzing Chhotar, Pasang Dorjee, Mingma Nuru, Lakpa Gyalgen, Karma Gyaljen, Samduk Dorjee Tamang

The total number of climbers from the Transcend Adventures Indian Team who have reached the summit so far, now stands at 16 Climbers and 22 Sherpas

One of my favorite writers this year was Ricky Munday with Summit Climb. He turned back on his summit bid and explains in an excellent post on Facebook. Click to see his pictures and read the rest of his post.

My appetite was severely affected by the altitude. After a big 10-hour, 900m climbing climbing from the North Col to Camp 2 (7,900m), all I was able to eat was a handful of peanuts, a protein bar and two mini Babybel cheeses. I could smell George’s freeze-dried meal and I almost vomited. For two nights, I had very limited intake. This lack of calorie intake was completely unsustainable, but I couldn’t force anything more down. I made the difficult decision not to continue with the team, and to descend. I was unwilling to put my life at risk or to become a burden to the team.

I already provided updates on many commercial teams but a few more are just coming in.

Asian Trekking for the Greek team:

Asian Trekking’s Eco-Everest members Mr. Michail Evmorfidis and Mr. Antonios Sykaris along with our HAS Mr. Pemba Tshering Sherpa, Mr. Ki Dorjee Sherpa and Mr. Tshering Chhosang Sherpa left South Col (Camp 4)last night at 10 pm and successfully sumitted MT.EVEREST today on 22nd May 2017 at 10:30am.They spent 5 minutes at top and now descending. We are so happy for their great achievement and pray for their safe return.

Elisabeth Revol reached the summit of the Lhotse

Kilian Jornet summited but ended his speed attempt due to illness stopping at ABC on north. His team posted on Facebook:

Kilian Jornet reached the summit of Everest at midnight of 21st to 22nd May (local time) in a single climb without the help of oxygen or fixed ropes.

He reached the summit via the north face of the world’s highest mountain (8,848m) following the traditional route. Kilian Jornet began the challenge at Everest Base Camp Base near the ancient Rombuk monastery (5,100m) on May 20 at 22h local time (+5:45 GMT).

At 12h15 local time of May 22nd he is back in the Advanced Base Camp (6,500m) where he confirmed summiting Everest at midnight, 26 hours after beginning the ascent.

38 hours after starting the temptative, he has arrived to the Advanced Base Camp of Everest, he explained: “Until I reached 7.700m I felt good and was going according to my planning, but there I started to feel stomachache, I guess due to an estomach virus. From there I have moved slowly and stopping every few steps to recover. However, I made it to the summit at midnight”.Due to this indisposition, Kilian Jornet choses to conclude the attempt, and stay in the Advanced Base Camp and not returning to the Rongbuk as planned.

Once we have more information about the challenge, we will inform through the channels of Summits of My Life.

UPDATE: There are many questions now being raised from use of oxygen, Sherpa support and illegally traversing without a permit.

According to the Himalayan Database there has only been 34 traverse and only one without supplemental oxygen, Jozef Just, who died in the process. 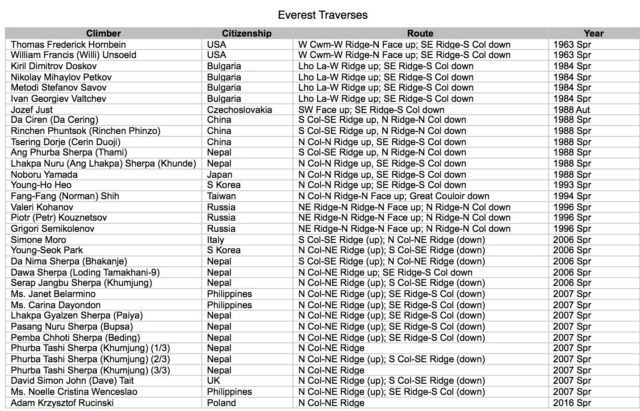 The body of missing climber Ravi Kumar was found:

The body of an Indian climber was spotted on Mount Everest on Monday, after he went missing two days ago while descending from the world’s highest peak.

Sherpa rescuers spotted the body of Indian climber Ravi Kumar, but it was impossible to retrieve the body, said Thupden Sherpa of Arun Treks and Expedition. It appeared that Kumar had fallen some 200 meters (650 feet) below the route, he said.

EverestER provided a public update on the long-line rescue and how they have been working with all the teams throughout the mountain on health issues. Click to read the entire post::

But we’ve been doing over the radio consult to the people having health problems at camp 2 and above. Over the radio night consultation was done, last night on a climber who was left between camp 3 and 4, and spent the night outside the tent in that area. Capt. Folini of Fishtail air with the help of our own Lakpa Norbu tried to bring him down via longline four times yesterday but failed to do so due to bad weather on the Lhotse face and western cwm. He was helped by two descending IMG Sherpas and four Sherpas who went up from camp 2 to get him down to camp 2. He was heli evacuated today during the first hour in the morning.

Everest 2017 is far from being over. There are several teams positioned at the high camps waiting out what could be a short period of bad weather. Many are now looking at the 24.

Summit Climb on the North is aiming for the 24th:

Hi this is David O’Brien. We moved up to camp 2 yesterday. There’s an adverse forecast for the 23rd so have stayed here before moving onto camp 3 . We are now aiming for the summit on the 24th. Amazingly I can get a phone signal here at 7900m.

George Kashouh with SummitClimb posted this brief video from Camp 2:

Yesterday me and some members of Kari Kobler’s North side Everest expedition came back to Advanced basecamp (6,300 m). I felt light, strong and well rested after a week in basecamp (5,200 m). The weather window I’m hoping for for an ascent without supplemental oxygen is slowly approaching and the time of being patient seems to come to an end. I’m in contact with Charly Gabl, meteorologist, mountainguide colleague and “my” amazing weather adviser for the last 20 years.

Today maybe 60 Climbers only from the Tibetan side of Everest try to ascent to the summit. At my age climbing without supplemental oxygen one needs to climb at a very steady pace – can’t speed up for overtaking (loosing too much body warmth) or can’t wait at typical cueing points (loosing body warmth by just waiting). So I decided to wait for the atmosphere still warming more up and for not having to deal with lots of other climbers. Staying warm at this very high altitude is the key challenge of an ascent without supplemental oxygen. Only by hard and quick breathing the body is losing more body warmth than it is able to reproduce.

IMG still has two subteams to go. Alpine Ascents is at Camp 2 ready as well.

Tim Mosedale on the south. A no Os attempt is coming from Clearskies team with Markus Amon (www.markus-amon.at) and Hannes Gröbner 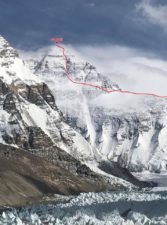 Japanese Nobukazu Kuriki is holding out for better conditions before he ascends to the West Ridge and then climbs to the summit via the Hornbein Couloir:

5:00 weather forecast this morning, 25 days more than the wind weakened forecast, and the west is a very dangerous place, so the wind is very dangerous. In order to avoid acting in West-the, he went up to West-ji temple from the morning to the West-the, aiming to attack on top of the mountain on the 25th.

I have a little sore throat, but I’m not sick. I think there is a chance that the wind is weak compared to the fall. I’ll do my best.

That all for now. Best of luck to all.

6 Responses to “Everest 2017: Huge Wave 3 with a Traverse and Speed Summit”