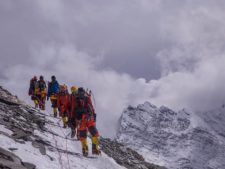 It has been a season of wild swings from the weather to information from the mountain. But it’s not over.

Let’s look at who is left and where they are. Heavy snow appears to be arriving on 28 May, so there is a sense of urgency for those still heading higher.

Alpine Ascents seems to have had perfect timing this year lead by Ben Jones. They have been off by a day or so from all the major movement on the mountain and have not had any of the difficult weather or crowds – in fact few teams have commented crowds on either side.

They are at the South Col preparing to summit hopefully on the 27. but they will need to watch the snow coming in. Ben posted an update with a nice picture – he has posted some amazing photos this year:

Last few minutes to the South Col today. It was unbelievably hot the entire day from Camp 3 to the Col but our team did great. We had some people coming sporadically but for the most part we had the entire day and route to ourselves…..just the way the entire expedition has been! Tomorrow we rest here breathing supplemental oxygen at almost 26,000ft before leaving for the summit the last couple of hours on the 26th. We have mild winds here at the Col right now and look for the wind to be quite calm on our summit day. We are pumped!! 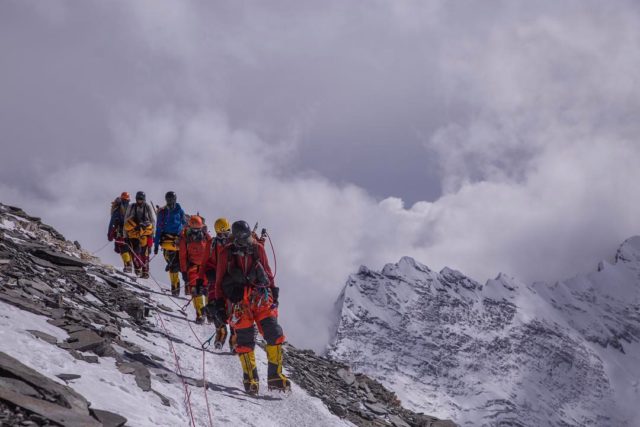 To South Col by Ben Jones

Himex with three members, one guide – Bruce Hasler –  and a team of Sherpas are on their summit push. Jeff Smith and Joe Burke are two of the members. It has been a tough season for Himex with early summit attempts by David Tait and Kenton Cool not working out plus some illness in their team. Russell Brice choose not to even post his traditional information filled newsletters due to computer issue but probably more due to all the issues.

UPDATE: Himex got their summits:Kazu,John,Jeff and guide by Bruce Hasler and 4 Sherpas.  – reported no wind at 7:20 am 26 May

Tim Mosedale and crew of three members plus support are pushing to the top. Tim already summited earlier this season with Scott Mac and documented the state of the Hillary Step. All the Irish back home are pumped for another Irish summit, this time by Rory Mchugh

UPDATE: Blake Pension posted SPOT tracker from summit around 8:00 am 26 May

David Klein turned back due to winds

UPDATE: David turned back early 26th, just after midnight, Friday. That was last night. He is already down in camp 2 and descending to EBC tomorrow. source: Laszlo Pinter  www.mozgasvilag.hu

Ferran Latorre is at Camp 4 headed higher. So is Yannik Graziani who posted:

Reached this morning C3. Beautifull weather but verry warm (35degrees). Tomorrow to South Col, and saturday should be the day! Weather window seems to be great! We are the last team I think.

UPDATE: Yannik posted: “We reached South Col at 12:00 (now time) with a bad weather. Fortunately this is the time to climb to the summit! “Fuerza !!!!

He said he was feeling well, returned from Camp 2 or higher on the West Ridge – back to Gorak Shep, started feeling better and now feels he can summit via the West Ridge and Hornbein Couloir on 31/31 MAy. He will certainly be alone by then. One concern will be if the Icefall Doctors are still maintaining the route. He posted:

Hi, It’s me, Kuriki. Yesterday, on the 24th May, I started to climb aiming for my final camp, but actually on the 23rd, I had been felt like vomiting, so yesterday, I waited until the afternoon to make decisions.

I arrived until the altitude of 7,300m, however my nausea didn’t go away, so to make my condition better, I came down till Gorak Shep, 5,300m. At first, I thought about mountain disease, but my SpO2 is 80 and it’s quite good, and I don’t have headache, just have nausea, and now my condition is much better.

I will stay here for one day, then, I will make my attempt again on 27th. If the weather holds, I will arrive at the summit on 30th or 31st.

The belt of blue ice, on the way to West Ridge from camp2, troubled me. In some part of it, snow sticks on the ice, but that snow has only 3cm thick and I had to go through on the ice.

I will leave the day after tomorrow. I’m sorry for worrying you.

It isn’t over yet.

SummitClimb had a horrible attempt where they went up in huge hurricane winds and got smacked. Tents destroyed, mittens flying away. They somehow returned to ABC. Frankly, they are lucky to be alive … and they are going back according to George Kashouh and are at Camp 3. George has a long post but this was key for me:

Our expedition leader left to check on the tents tied to us on either side. He came back in saying we had to bail immediately; expedition over. There were some protests, but all our tents were nearly destroyed, no one had eaten or drunken any fluids. We had seriously been doing things like breaking a snickers into pieces and sharing it with each other. We were all exhausted with missing gear and in an emergency situation.

When I went outside I saw why the expedition leader made the sudden decision. Every single other tent on the mountain was destroyed as far as you could see except ours. Every single one. I was told to go to the neighboring tent to let them know.

The winds were so bad it was impossible to check the tent properly with it violently flapping around. My googles were missing so I also couldn’t see in the wind either with ice blowing around. We were able to salvage my harness, my sleeping bag, and my backpack. I wasn’t able to find any of my snacks, water bottles, gloves, googles and some clothing.

We still weren’t able to rest because one of our friends hadn’t returned. We could see someone coming down halfway from Camp II but at a slow pace. The expedition leader and a Sherpa went up in the dark for a rescue. The best I could do to help was shovel snow and melt water for their return. Around 1 am they successfully stumbled into camp. Our friend had made a super human effort to get back to the North Col. He descended in horrible weather, completely out of energy, disoriented, blind, and with blackened fingers from severe frostbite.

This morning I found it exhausting to leave my tent. Somehow I’m back in Camp II but we have a ten percent chance of success. Another storm is coming in and if it’s half as bad as before we’re done. Even with perfect weather we’re all exhausted and returning to camp II was twice as hard as before. Sleeping with my harness and boots on tonight to prepare for the worst.

Alpenglow is at Camp 3 hoping to get Adrian Ballinger up without Os. Member George They have laid back for a long time waiting for perfect weather. Again, I hope they get up and down soon. Adrian posted:

UPDATE: at C3, Emily Harrington posted on SnapChat they are leaving for summit early Saturday morning 27 May

Ralf Dujmovits is on his way without Os. He is looking between the  27-29.

I started the final ascent of Mount Everest from it’s North side. We hope for a late weather window starting the 26th of May and continuing for some days – low winds and relatively high temperatures are expected.

UPDATE: at C3, probably leaving with everyone else early Saturday morning 27 May

Finally there is a rumor that Kilian Jornet has started his speed run again. He made the summit already in stunning time but stopped at ABC on the return due to illness so wants to finish the project. Hopefully this can be confirmed if he is trying again.

UPDATE: no further information suggesting that this was a rumor and he’s not trying agon.

I’ll update this page with the latest., Best of luck to all.