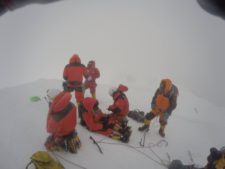 If there is one certainty in mountaineering it is not to believe everything you read, and in some cases your own eyes.

For the second time this season, well-regarded Sherpa guide, Mingma Gyalje Sherpa seems to have missed the summit. First on Nanga Parbat by his own admission now on Broad Peak according to one of the climbers with him. These are not the first time Mingma has had his summit questioned even though he claims to have summited 11 of the 14 peaks above 8000 meters.

For many climbers, these claims end up being honest mistakes where the climber believed they had reached the true summit, but later – based on photos, videos and GPS tracks, reveal they actually reached a false summit or one slightly before the real summit, aka the fore-summit.

I have always taken the climber’s word when they say they summit. While there have been false claims over the years, the vast majority of climbers are honest and I’m not willing to paint all climbers with one bad brush. Mark Horrell had made several nice posts about false claims.

Mingma is not alone with scrutiny. The late Ueli Steck was questioned about his summit of Annapurna when he offered no independent evidence like a photo, GPS track or witnesses. And even Kilian Jornet is under some scrutiny by a few conspiracy theorists of his claim of two Everest summit within a week this year since he also has offered no similar conclusive evidence to their satisfaction.

Sometimes, the fraud is real and, when caught, the climbers admit it. Two of the more famous modern day cases were by Christian Stangl on K2 in 2010 and the Indian police couple who photoshopped their faces into another climber’s Everest summit picture in 2016.

Earlier this month, Mingma posted that his team had completed his fourth summit of an 8000 meter mountain by topping out on Broad Peak just days after he summited K2. They summited in bad conditions – low clouds, snow and wind. Mingma was with several Sherpas, Pakistani climber Ali Raza, John Snorri Sigurjónsson and Fredrik Sträng 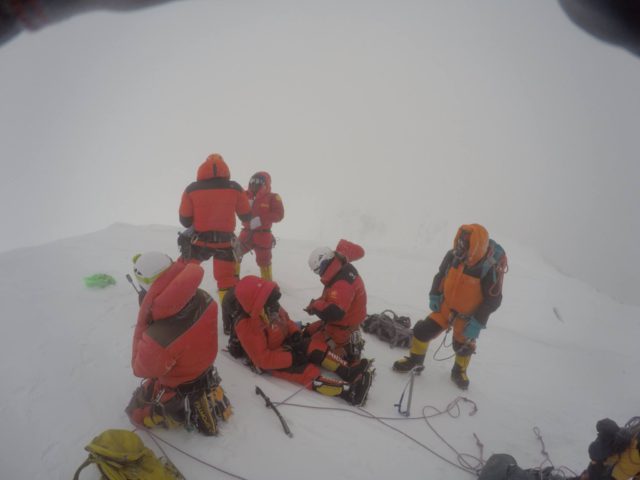 The reason for me abandoning the claim is that I am not 100 % sure any more if we truly made it to the main summit or not. When we (5 Sherpas, 1 Pakistani and 3 members on Mingma Sherpas team and I) “summited” it was in a snow blizzard, poor visibility and in treacherous terrain.

I immediately asked Ali Raza on the “summit”, “is this the summit?”. Ali was on the main summit 1-week prior our attempt and have summited twice before our attempt. He should know where the main summit is and I don’t see why he should lie about being on the wrong summit. When I asked him for the third time “is this really the summit!?” he became irritated and said “YES!”. I looked around, I was confused, I had studied the route many times (I even made 3 summit attempts in 2012 when I tried to climb Broad Peak) but at that altitude and in that snow blizzard I simply did not recognise myself from the pictures that I had seen. But I was also overwhelmed by Ali Raza and other members who where totally convinced that this was the right spot. For those of you who have not been on Broad Peak I would like to inform that Broad Peak summit ridge is a complicated one and especially in a snow blizzard.

Nima Sherpas altimeter showed 8047 m so this should be it!? When I came home researcher Eberhard Jurgalski contacted expedition leader Mingma Sherpa and me asking questions about our summit videos. I had long discussions with Eberhard and we e-mailed images back and forth and started an investigation cross-checking summit pictures with other summit pictures. Something was not right. Most of our group was still in Pakistan with chapatti-slow-internet so it was hard scrutinising the material since we could simply not send it. Then finally we got a GPS coordinate from John Snorri Sigurjónsson who climbed with O2 with us on Broad Peak and the GPS showed 8030.89 m (probably 17 m short from the summit). We double checked the position of the GPS coordinate and things did not match with the main summit. Something was clearly wrong but we also know that GPS sometimes works poorly and for instance when John had summited K2 with O2 in Mingmas group one week earlier the GPS did not show the correct altitude on the summit of K2. Instead it showed around 8600 m (about 11 meters short from the summit) so the GPS alone could not verify our true position.

We looked further and started comparing summit videos from for instance the Turkish climber Tunc Findik who had been on Broad Peak main summit one-week prior our attempt and when we zoomed in the images (remember that our summit video is in a snow blizzard so this was hard work) I felt and so did Eberhard that they did not match 100 %.

Where is the Summit?

This may seem academic or even silly if you have never climbed a big peak. I can tell you that climbing in white out conditions, fog or low clouds makes everything more difficult, obviously, but even finding the true summit.

Today, most climbers use a GPS device to track their route. The device shows the altitude and many rely exclusively on that to determine the summit. But it is not that easy. The altitude measurement uses a table based on the barometric pressure. If the device is not calibrated that day, or there is a large change in pressure, the reading can be off, sometime by a lot.

The best evidence of a summit are the GPS coordinates. Eberhard Jurgalski says for Broad Peak the approximate coordinates of the main peak are 35°48’39” 76°34’06”. Climber John Snorri Sigurjónsson had a Garmin GPS device and his track showed their highest point at Lat: N 35°48’47.8188″ Lon: E 76°33’56.8836″. The difference is significant meaning they were not on the true summit, at least John’s device was not and they claimed they were all together.

As for Minga Sherpa, there is no doubt that he got very close to summiting all the ones he claimed thus far in 2017: Dhaulagiri, Makalu, Nanga Parbat, K2 and Broad Peak. On Nanga Parbat he believes he mistakenly stood on a sub summit and will have to go back. Now it appears he may have to revisit Broad as well.

Long time 8000 meter statistician Eberhard Jurgalski who runs research is doubtful on some of his other claims, especially Lhotse and Cho Oyu. Mingma told me he had no intention of summiting all 14 when he climbed those peaks thus didn’t bother to have proof. Today he is actively seeking to receive his summit certificates from Nepal.

For most recreational climbers, reaching the fore-summit and not risking their lives to cover the last few meters of deadly, snow-covered cornice traps is a wise trade-off. However, if the climber is aiming to join the rare club of 39 climbers who have summited all 14 of the 8000ers, details matter as does respecting the accomplishments of those who reached the absolute true summit before them.

A handful of individuals around the world, including Eberhard Jurgalski, Damien Gildea and Rodolphe Popier plus the Himalayan Database now run by Billi Bierling take it upon themselves to arbitrate such claims, and I leave it to them to do their work.

5 Responses to “Climbing News: The Difficulty of Finding the Summit”