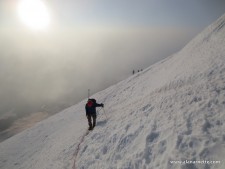 As we enter the weekend, the winds are predicted to calm and with many eager to summit, I anticipate a lot of activity. The jet looks to move off the summit and stay away for a week! The Summit window is here!!

Over the past two weeks, it has been tough on the Everest aspirants. Between a cyclone and a stubborn jet stream, poor weather with extreme winds have held people in place. Extreme winds topping out at over 80 mph have destroyed tents and supplies caches at the highest camps.  The rope fixers that put the fixed lines to the summit have been stalled at 26,000-feet on the Nepal side and 23,000-feet on the Tibet side. Without the ropes in, few will attempt the summit.

However, all is not lost and this weekend the winds are forecasted to calm and we might see a large wave of summits, not only on Everest but across the entire Himalaya Mountains Range including Cho Oyu, Dhaulagiri, Makalu, Kangchenjunga, Lhotse, and Shishapangma.

Everest is crowded this spring on the Nepal side. The Nepal Government issued a record 378 permits to foreigners, adding at least one support Sherpa per climber, that puts over 750 people on the mountain. By the way, for all of Nepal’s mountains, they issued 842 permits and brought in $4.4 million in royalties. On the Tibet side, that has traditionally fewer climbers, 142 permits were issued to foreigners so that side will see around 300 people climbing.

It’s possible that 2019 might see Everest break 1,000 summits in a single season. The previous record was last year with 802 total summits on all routes.

One team to watch will be American Cory Richards and Ecuadorean Topo Mena. They want to pioneer a new route on the Northeast Face of Everest starting from Advanced Base Camp at 21,325-feet in Tibet. Their proposed route starts with a climb straight up a 60-degree angle, 6,551-foot narrow rock gulley. At times, they will navigate icy rock slabs. At the end of couloir,  they will join the Northeast Ridge route around 28,000-feet. Ideally, they plan to leave the standard route quickly and take a much steeper and dangerous, however more direct, route up the Messner Couloir and directly to the summit. They are climbing without supplemental oxygen, Sherpa support or ropes.

This spring has been a deadly one on the world’s highest peak. Four climbers and one Sherpa have already lost their lives. In March on Pakistan’s Nanga Parbat, Daniele Nardi and Tom Ballard were found dead at the bottom of a snow gully. On Nepal’s Annapurna Malaysian Wui Kin Chin, 49, passed away in a Singapore hospital on May 2, 2019, after sustaining injuries while climbing Annapurna and on Makalu, also in Nepal, top Peruvian climber Richard Hidalgo was found dead in his tent at Camp 2 this week. On the Tibet side of Cho Oyu, Phujung Bhote Sherpa of Makalu, Sankhuwasabha fell into crevasse near Camp 2 and died.

Not to be forgotten, climbing has begun on Denali, the highest in North America. According to the Denali Mountaineering Blog, one of the best anywhere, there are 975 climbers registered. Already 5 have completed their effort but no one has sumitted.  92 are now on the mountain. Rangers at Base Camp reports:

Quick report from Basecamp:  7,200-foot camp got about a foot of new snow overnight, with overcast skies this morning.  Rangers at 11,000-feet report a couple days of blowing snow.  Conditions are improving throughout the day on Thursday.