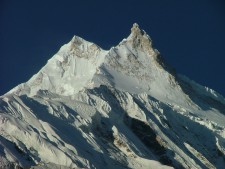 Climbers are summiting Manaslu daily with no issues reported. Meanwhile tragic news from the highest peak in Europe with multiple deaths on Elbrus last week.

Manaslu once again is showing that it’s one of the most “achievable” 8000-meter peaks. Along with Cho Oyu, Manaslu is often the first 8000er for climbers seeking Everest or K2. There have been at least 72 summits thus far with many more expected.

The new operator 8K Expeditions‘ Pemba Sherpa tells me everything is going well. But it is not without controversy, as are most things in mountaineering. The “true” summit is often blocked in Autumn by a very dangerous, thin snow cornice that would be suicide to cross. Even though it’s only a few meters away, most commercial, and some professionals, are content to stop at the dangerous edge. However, others stop significantly lower, perhaps 20 to 40 meters below the foresummit. Mark Horrell did a nice job explaining this situation on his blog.

Manaslu has the highest number of climbers this Autumn with 171 permits issued to foreigners combined with an equal number of support climbers totaling 342 people climbing the mountain. The next highest is Dhaualagri with 80 total climbers. Overall there are around 460 climbers spread over 25 teams on six peaks in Nepal. China has closed to foreigners again this autumn and there are few to none currently climbing in Pakistan.

As usual, the rope fixing team was the first to summit. The fixers were from several teams:

Kasif, from Pakistan, is becoming quite the celebratory in his home country. He is on a quest to summit all 14 of the 8000s and now has 8.

Pioneer Adventure Treks also had success with 11 on top

Of note, Diki Lhamu Lama became the first woman from her village Sama Gaun to Summit Mt. Manasluin her traditional attire (Bhakku) on the summit of Manaslu. The village is located at the base of Manaslu. 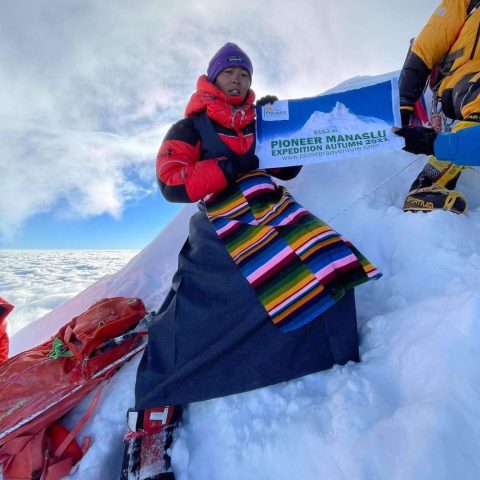 Ascent Himalaya gave this update on their three summiters:

Imagine Nepal posted they put 22 people on the “true” summit, no details or summit pictures yet:

There are four teams with 40 foreign permitted climbers on the 8167-meter/26,795-foot peak including 83-year-old Carlos Soria Fontán which is his 12th attempt. Apparently, poor weather has delayed all climbing but is expected to continue with summits targeted around September 30.

Over on Kangchunga, the Alpenglow team has not provided an update in the last five days, but no worries.

Five climbers in a team of 19 died when a snowstorm intensified. Poor weather was in the forecast but the intensity caught the climbers and their professional guides off-guard. They were around 5400-meters when it hit. Over 70 people came to the rescue saving 14. The group began as 23 climbers and guides but some turned back as conditions worsened.

Despite the Gigász rescue operation, there is a serious tragedy on Elbrus, five people died in a storm. Shocking footage and devastating news of Elbrus has arrived, where members of a led group of twenty people got into trouble in a brutal snowstorm. About twenty more people participated in the rescue, but the lives of five clients were not able to be saved. Mountain RU reported in detail about the events.
(Dear journalist group members! If you would like to use the described here, refer to this post with the link and mention the name of the Snow Border / Movement World. Thank you. ))

The tour was organized by the Elbrus Guide tour guide to climb the 5642 m high peak. The participants were all Russian. The group consisted of 23 people in total, but three of them did not start climbing the top. The 16 clients were accompanied by four leaders (two guides – Ilja Csujkov, Anton Nikiforov and two assistants – Taulan Kipkejev and Igor Dankov).

At 10.00 o’clock, one of the participants got sick. They decided he should be escorted immediately. One of the assistants Dankov started with the girl down. The others all went on and reached the top. While two were heading down with the sick girl, after 10-15 minutes there was a huge snowstorm. Visibility reduced by half a meter, temperature is minus 20 degrees, wind speed reached 140 km / hour. One hour after the couple reached the Elbrus saddle (Sedlovina), the girl died in the hands of Dankov.

Igor waited until 15:00 o’clock in Sedlovina, while trying to notify the Russian Ministry of Defense responsible for rescuing and the ratrakos in the peak attack camp. Finally he started down by himself. He was the first to inform the organizers of the dramatic situation.The coordinator of the organizers Jelena Alimova immediately informed the ministry and the rescue operation was launched.The team descended from the top was divided into a slow and fast group to prevent mass freezing. While descent from the platform to the saddle, one client broke his leg, which continued to slow the team’s movement.

Two clients died on the way due to hypothermia. They lost consciousness of two more clients, they managed to be delivered to the station in Garabas, which was 3900 meters away, but they didn’t come back to themselves, they died too. A total of five out of the group of twenty people lost their lives. Leaders and quite a few clients were taken to the hospital in Nalcsik with freezing injuries. Some people didn’t ask for medical attention, they are at the Jantugan hotel. Photos: https://t.me/mash_gor, info and photos via Mountain RU

Offical from Nepal Gov’t: no quarantine for vaccinated visitors but must have negative Covid-19 test 72 hours prior to the departure, and complete this online form. More details are in this article.