Word is coming out of Nepal that a huge flag was draped from the summit of one of the world’s most beautiful mountains, Ama Dablam in Nepal at 6,828 meter/22,401 feet, this week.

It appears that a team from Kuwait with the support of Nirmal Purja’s new expedition company pulled off the antic. The Kuwaitis have carried their country’s flag to other summits including Mera Peak in 2016 but nothing of this scale. By hanging one long red and another blue with white snow in between, it was designed to be the flag of Kuwait.

Two banners measuring 328 feet by 98 feet and weighing in at 330 pounds were divided into six sections to be carried to the summit. Elia Saikaly witnessed the disgraceful stunt and documented it on his Instagram feed on November 11. Given Elia is also a filmmaker, it’s likely he filmed this for a documentary. I hope it will be used as proof of what not to do. Elia posted on Instagram:

What you see here is the final stretch to the summit of Ama Dablam. We’re leaving in less than an hour and are aiming to summit the morning of the 13th of November. Now here’s the crazy part…

I’ve watched silently as these boys from Kuwait poured their hearts and souls into this project. It’s bold. It’s over the top. It’s outrageous. But you gotta respect the passion and national pride. 4 of them took on the mountain, 3 as first time climbers and now one, @q8_spartan, is representing Kuwait on the summit push. The rest of the team had the humility to call it quits, each reaching a personal best, touching either camp 1 or the Yellow Tower.

As for the flag: well… if there is one guy who can pull it off it’s @nimsdai and he’s currently leading the efforts, masterminding the strategy, implementing the plan and getting ready to not only guide his two commercial teams to the summit, but in parallel, make this absolutely crazy idea work.

The flag is in 6 pieces, 25kg per bag and it’s currently at camp 2. We’ve got a summit team, a helicopter team, a climbing team and an aerial team all ready to capture the unfolding of the unveiling.

I have no idea what’s going to happen up there, but I do know my man @q8_spartan has a perfect shot at the summit and I’m honored to be documenting his ascent.

Nims – you crazy man – if anyone can do this it’s you!

@kflag_heroes – you’re all nuts. @fmq3, thanks for roping @sherpapk and I into this. I think… Your bold ambition will be one hell of a story!

Inshallah it all goes smoothly.

And then on November 14:

I really didn’t know what else to do after being on the summit for over 90 minutes other than to sit down next to prayer flags and count my blessings. What was unfolding in front of my eyes was just too surreal to make sense of so a selfie with Everest in the distance felt appropriate. There’s just too much to type up in one post so I’ll give you the highlights for now.

World’s largest flag (150kg – 100m x 30m) was successfully hung from 6812m above sea level. Go back and read that last sentence because it was absolutely insane that @nimsdai and his crew pulled this off. KFLAG heroes project was a success.

Even Nims joined in on the PR but hasn’t claimed his team actually carried the material and attached it to the mountian:

Mission 3 : Probably one of the most challenging and high risk mission I have ever taken on the mountains . More info coming soon, watch the space

This is not the first time we have seen such an act. Known for what is called “environmental works of art,”  Christo and Jeanne-Claude wrapped Berlin’s Reichstag in a white material on June 24, 1995, using a team of 90 professional climbers and 120 installation workers. It remained wrapped for two weeks attracting thousands of visitors to the scene.  They also wrapped Pont-Neuf bridge in Paris, the 24-mile-​long artwork called Running Fence in Sonoma and Marin counties in California, and The Gates in New York City’s Central Park.

They wanted to a similar wrapping across the Arkansas River in southern Colorado near the Royal Gorge Bridge but local protests and environmental restrictions stopped the effort. 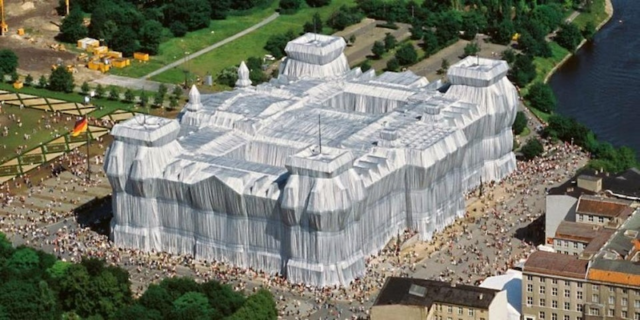 The Leave No Trace ethic can be summarized with the quote of “Take only memories, leave only footprints.” It’s attributed to Native American chief, Chief Seattle of the Duwamish Tribe. Here in Colorado, leaving graffiti on summit rocks or taking cardboard signs with the name of the hiker and mountain are quite common. Of course, they leave the sign up there, basically littering.

Yes, there are statues on the summit of Everest, a sign on Kilimanjaro, a cross on Aconcagua so I get it that this is not the first time someone has left something on a mountain summit. But the scale of this plus the almost certainty that parts will blow away or be left behind no matter how skilled the recovery team remains high.

Followers of the Kflag_heros Instagram feed praised the team as “heroes” and even went as far as adding “God bless you and help you and raise the banner of the national Kuwait .. May God reward you”

I’m fully and completely against any kind of defacing nature from a local trail to the summit of pristine mountains. While it is suggested the banner will be removed, there is no statement of by who or when but that is beside the point. The damage is done. The only legacy this stunt will have is to inspire others to do far more stupid stunts. All involved are neither heroes nor proper custodians of nature.

Just because it can be done, doesn’t mean it should.

What Do You Think?

I’m told the banner was rolled back up after an hour. And this on the Himalayan Times:

Undersecretary at the Department of Tourism Mountaineering Monitoring Section Mira Acharya told Nepali Times: “We are investigating the matter. They did not have permission to take such a big flag. If it looks like they have broken the rules, we will take action.”