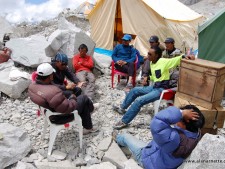 Teams are packing on the Nepal side and still climbing on the North as the aftermath of the Sherpa tragedy slowly winds down. A few small teams remain at the Nepal Everest Base Camp holding onto a tiny bit of hope for a chance to climb this year, but it is quickly slipping away. There is a report that a Russian team is still there wanting to climb. If anyone can do it without support it will be these tough climbers.

Some news outlets are reporting on another avalanche. It is important to remember that avalanches occur all the time on these big mountains, daily. Most everyone who spends anytime at Everest Base Camp can get footage of slips off Pumori or the Lo Lha Pass above EBC. This is not news or anything unusual.

On the North side, teams are now at Advanced Base Camp on their first acclimatization rotations. 72 year-old American, Bill Burke, reports all is well. Other reports say the weather is good.

The Triple 8 team on Cho Oyu is making good progress and hope to summit in early May. They continue to look at ways to keep their dream of summiting Everest alive.

South Side Update – Violence and Intimidation

In spite of a last minute press release from Nepal’s Ministry of Tourism on Thursday declaring the mountain open and welcome to all climbers, all the major teams whose Sherpa support is required to fix the ropes to the summit choose to leave.  The last few teams that had largest resources, Altitude Junkies, Himex and Asian Trekking ended their efforts late Thursday.

Greg Paul with Himex made this revealing post on what really happened. I have mentioned threats and violence but this paints the picture well:

It has been 7 days since the devastating avalanche. 5 days ago my group finished their acclimatization cycle on Lobuche peak and returned to Everest base camp. We attended the memorial for the 16 Sherpas who perished. Unfortunately the ceremony was “hijacked” at the end by some Nepalese pseudo guides that are not from the Khumbu Valley and who have Maoist roots. They incite other Sherpas to bully and use violence to get their way. Their purpose seems less about honoring those who died and more focused on getting power/influence. Intimidation has been their primary means to accomplish their power grab.

Over the last few days the large expeditions have been canceling their season like falling dominos. First, it was the expeditions that had lost Sherpas that cancelled…which is very understandable. The remaining expedition leaders determined that the icefall was safe and that avalanches were no more prone that any normal year. They also felt that the mourning period had been adequate and climbing Everest would not dishonor those who died.

Additionally, they know better than any one that the Sherpas sole source of income come from these expeditions. However, the militant group of violence prone out-of-towners wanted to capitalize on the situation to get long needed concessions from the Nepalase government. They felt closing Everest for the season would get everyone’s attention. First we heard that expeditions would be allowed to climb if they wanted. In reality, the Sherpas on the teams were told their legs would be broken if they took members onto Everest. Expeditions were told to leave base camp within days or they would be forcibly removed. These guys use sticks, stones and machetes to get their way so this was not very comforting news.

Another startling perspective comes from Tim Mosedale. This is a long but worthwhile read.

Time and again the Sherpas have stated that their argument is not with the Westerners and there is no animosity towards us. Their beef is with the government. They are sorry that we are caught in this tangled web on the sidelines but at the same time we (and the mountain) are being used as political leverage to get what they want. Obviously everyone wants better working conditions for the Sherpas but by holding us to ransom they are controlling the situation.

In addition to the shattered lives for the families of the fallen Sherpa, there are also shattered dreams. 18 year-old Alex Staniforth probably summed it up :

It’s with bitter disbelief and immense disappointment to confirm my Everest 2014 expedition is over. I am utterly gutted- I cannot pretend otherwise.  Sadly this is entirely due to civil strife and politics- circumstances fully beyond our control.

Our expedition leaders fought very hard and decided we would persevere until the very end unlike most of the other teams, in the hope this very frustrating and difficult situation would be resolved. Sadly as other teams pulled out the strength in numbers disappeared and the pointless politics got no further. This morning Henry Todd, our base camp manager told us we too had no option but to head down. I will never forget those gut wrenching words.

A huge issue now in how to get all the equipment they had already carried to Camps 1 and 2 in the Western Cwm back down given the issues withe the Icefall. Eric Simonson, IMG, posted this update:

In what may be a precedent-setting move, the Ministry has now granted permits for gear flights to the Western Cwm. IMG has teamed up with seven other Everest teams to charter a B3 helicopter tomorrow to insert a team of sherpas at Camps 1 and 2. There are now four companies in Nepal that operate this more powerful turbo-charged version of the AS350.

For IMG, we plan to send Phunuru and Chewang to Camp 2 and Kami and Karma Rita to Camp 1. Their mission will be to finish dismantling those camps and get all the gear either sent down to Base Camp by helicopter or secured for next year’s climb.  The maximum payload for one flight to/from Camp 1 will be about 200 kilos and to/from Camp 2 will be about 100 kilos, depending on the fuel load, temperature, wind, and ultimately the pilot’s discretion. Sounds like the pilot is initially planning to land at the camps and have the gear loaded on board (as opposed to sling-load the gear)… but this may change depending on how it goes.

Tim Ripple, Peak Freaks gave a hint of the future with his last update saying:

We will continue to climb on smaller mountains in Nepal and do what we can to keep the industry alive in Nepal,  but we will tread softly on future plans with Everest.

The Discovery Channel leveraging the camera crew they had for the wing suit jump that will air a documentary on this years Nepal events in a 90-minute special, “Everest Avalanche Tragedy,” will air at 9 p.m. Eastern time on May 4
Climb On!
Alan
Memories are Everything
Comments on/from Facebook