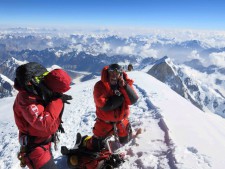 I am back home in Colorado now still processing my summit of K2 on my 58th birthday last month.

As I made the long journey home, I was thinking of how I can somehow repay in a tiny way your kindness and support for me. I am forever grateful for every donation to your choice of Alzheimer’s non-profit. I hope to get a tally soon.

But another thought was to try to share my K2 experience through a Q&A on this Blog. Just post a question in the comment section and I will do my to answer it. If you prefer something less public, send me an email at climbing@alanarnette.com.  I will try to answer as quickly as possible.

Obviously, I am not a professional climber, mountain guide, Alzheimer’s spets or physician so some topics I am not qualified to respond to and other resources are better suited for those topics. But I am glad to share my experiences as I have for the last decade through my site.

To get things started, a few people have asked about what I thought were the keys to K2 this year. With this being my 36 major expedition and 9th to an 8000m peak, I think I can identify five areas. Obviously these are my thoughts and don’t apply to everyone.

ORGANIZATION:I have to start with how the climb was organized by Garrett Madison of Madison Mountaineering. Garrett has taken more people to the summit of Everest than any other guide and summited six times himself so he understands expeditions very well. He thought through the schedule in an aggressive yet simple manner to minimize our time on K2 exposed to the objective dangers but also to reserve our energy for the summit push. As a result we only made one acclimatization rotation. This proved to be sufficient and we used supplemental oxygen. Others climbing without O’s made as many as four rotations to the higher camps.

While we used the base camp and logistical services of Seven Summits Treks, we were a self contained team with our own Sherpa support. It was a comfortable base camp with good food and general support. I never got sick before the summit push, lost weight or felt stressed – all this was key to going into the summit with a good mental attitude.

A final factor was that I employed every trick and technique I knew throughout the expedition from sleeping to gear to eating, drinking, foot placement (simple, small steps), clothing layers, attitude, who I hung out with, etc. One proof of how it worked was that I never lost my appetite, rare for me.

WEATHER: We experienced some of the weather K2 has seen in modern expedition times. There was over a week of minimal precipitation and very low winds. When we summited at 8:00am on July 27, the winds were less than 10 mph. It was cold, maybe 0F and my fingers got very, very cold as I took off my gloves to make phone calls, etc. But for the summit of K2 at 28,251′ – this was nothing.

We did see 3 feet of fresh snow the previous night covering some of the fixed lines but again, this was not a major issue. During our acclimatization rotation, we had a couple of days of high winds, heavy snow and low clouds that gave us a hint of what K2 could provide but for the summit window – it was perfect.

PREPARATION: My fitness was at the level for an 8000m peak ever including Everest three years earlier.  In the previous 6 months, I climbed over 15 14,000 Colorado mountains with 30 pound packs and did a total of 58 outside activities from 14ers to day hikes. I went to K2 at my target weight which was 177 pounds for my 5’10” frame.

That said, in hindsight, I could have used a bit more upper body work given the extensive rock climbing on K2, plus more cardio work. I think these are given on such a high altitude technical peak such as K2.

SHERPA SUPPORT: This should be no surprise to anyone who followed me that having my Everest summit partner Kami (Ang Chhiring Sherpa – Pangboche) was a perfect match for me. At age 49 with 15 Everest summits, and an attempt on K2 in 2008, he had the maturity, experience and personality I needed. It goes without saying I trust my life to Kami. He was always supportive, professional, competent and is a genuine nice person.

Kami along with Kami Rita Sherpa, Fur Kancha Sherpa made a couple of carries to establish the high camps plus were there by our sides as we climbed. I want to be clear, I would not have summited K2 without their support. Also, having a small team of myself, Garrett and Matt Du Puy was perfect. We got to know and trust one another. It is not a gross overstatement but we almost climbed K2 in alpine style as a small team – perfect for such a dangerous mountain.

PURPOSE: In looking back at my other climbs, I hit my mental wall way before my physical wall and quit too soon. I never understood how much reserves my body really had. Again, many people talk about mental toughness but my previous experiences showed me how far one can push their body if the mind is willing. So in the last few years, I have been working on mental toughness. When the time came on K2 to push my body, my mind was willing. However, I had to reach into depths I didn’t know existed on summit night plus the descent. More on this as I write about the overall climb later.

But the biggest difference was the inspiration and motivation that came from watching my mom struggle with Alzheimer’s. She did it with class, dignity and humor. She never let on how much it hurt. Her strength and courage kept me going every time I felt weak – physically or mentally.

In addition, knowing that there are millions going through the same struggle inspired me knowing that all of you were watching me. I simply could not let you down. So perhaps the pace went a little quicker.

OK, not all my answers will be this verbose but please send them in. I hope I can add some value back to like you have to me.