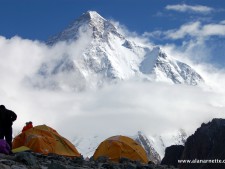 Climbing continues in the Karakorum on all the peaks however most took a few days off to allow a weather system to pass by. But the stress of climbing is taking its toll.

Bo Parfet, climbing K2 with Himex, took a helicopter out of Base Camp this past week citing higher priorities with his new born child. Another Himex climber, Alec Turner, reportedly also left but took the much less costly option of trekking out, saving about $40,000. He has not made a public statement for his reason.

We do know there have been significant avalanches off K2 recently, but that is the norm as I covered on a previous post.

Himex seems to be following a unique acclimatization strategy that involves their climbers using Broad Peak to reach mid level camps instead of those on K2. David Tait, apparently having K2 as a priority has spent a night at Camp 2 on Broad Peak while the Himex Sherpas have reportedly established Camp 3 on K2 via the Česen Route aka Basque Route.

Russell Brice posted a few updates this week but this seems to be the headline:

However K2 did give us a great display of just how savage she can be a few days ago, and it was a great learning lesson for us all, especially myself. During the day we had no less than 5 major avalanches that came down the slopes, one of which the snow dust cloud enveloped the Base Camp for a few moments, although this was of no danger to us. But there was evidence of at least 3 other avalanches that must have occurred during the night. These avalanches were triggered by wind slab releases from the various bowls that are high on the mountain. I must say that I regretted that I did not bring the climbers that day back off the hill early on, when I spoke to Shinji by radio about this danger. I had noticed the transportation of snow by the wind near the summit, and was concerned, but Shinji reported that he was well established on the Cessen Ridge and was out of danger. This proved to be correct as the first of these avalanches came down. Many people had told me that the Cessen Route was a little more technical, but that it was safer from avalanche, so it was reassuring to see that this information was correct. However I was not expecting this same bowl to release 3 times in one day as it eventually did. Lesson learnt, and we will keep a much better eye on this in the future.

Various posts mention the Himex climbers were spooked by the close call with the avalanches. Brice said they would skip Camp 1 on both K2 and Broad on future rotations.

Meanwhile the other major commercial team on K2, Madison Mountaineering, left today for their first rotation with an objective of Camp 2. French photographer and climber Alex Buisse is documenting their K2 climb and already is posting some outstanding photographs on his website.

On Broad Peak, climbers Chris Jensen Burke, Al Hancock, Margaret Watroba are continuing their rotations as independents while Billi Bierling as part of the Himex team tweeted she had reached Camp 2 and was prepared to go to C3 when the weather cleared.

I will spend the next few days of bad weather recovering in base camp and preparing for a potential summit push.

So, climbing continues along with the usual weather delays and personal issues. Climbing in the Karakorum is not the usual adventure.

One Response to “K2 2015 Coverage: Weather and Avalanches”