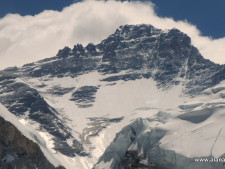 After 202 climbers summited the morning on 19 May, another couple of hundred will continue tonight looking  at 20 May for their time on top of the world. Sadly, there was one death  but it was not associated with the summit push. Some teams reported lines but that appears to have been not widespread judging by the team and individual reports. There have been 300 summits just from Nepal thus far, and only a few from Tibet as of today.

The 2016 season continues to go about as good as an Everest season goes – decent weather, manageable summit pushes, few surprises but sadly there have been deaths.

After six straight days of summits from Nepal, the winds stopped the spree on the 17. The conditions had been marginally acceptable and there were a few case of frostbite due to the high winds experienced on those summit pushes. Most teams choose to wait for the more traditional summit windows starting around 18 May.

Over on the North side, the Chinese climbers responsible for fixing the lines to the summit were also stalled by the high winds but have said they will get the lines in so almost all the teams have left Chinese Base Camp for their summit pushes. But it appears there were summits on 19 May.

This morning summiteers mostly spent the night of 18 May at the South Col after high winds stopped all attempts to summit that night. In speaking with some of the professional weather forecasters, they said 50 mph winds were in the forecast. It appears that teams continued to the summit in spite of the high winds to get ahead of the 400 some-odd climbers predicted to attempt the summit from the Nepal side from 18 thru the 21 of May.

Their wait was rewarded with good conditions for Everest – no precipitation and winds that were considered reasonable.

Most of the commercial climbers use 4 liters per minute of supplemental oxygen and had a personal Sherpa, or two, by their side. This has become standard for almost the past 5 to 7 years. Those who didn’t summit, mostly reported altitude related illnesses, not conditions.

There are many climbers who became first for their country or cause – too many to note here – but feel free to add them in the comments section. Department of Tourism official Gyanendra Shrestha is based at Everest Base Camp and collects the daily statistics.

The summits will continue tonight and tomorrow and perhaps into late May if the weather holds as there are a few large teams still climbing to the South Col.

The Indian Army wanted to summit Lhotse prior to Everest and took responsibility to fix the ropes. They were supported by Arun Treks. According to the Himalayan, sadly, while seven of the Army climbers were following on Lhotse, Ang Furba Sherpa, part of a seven person rope fixing team ahead fixing the ropes,  fell to his death down the Lhotse Face. His fall was witnessed by climbers at Camp 3 and on the Face. My deep condolences to his family, teammates and friends on this tragic loss.

This was the second death of the 2016 season. The first was reported a few days ago on the North side from abenteuer-outdoor

One the Tibet side, teams are now positioned at the North Col, and higher at Camps 2 and 3 looking at summits starting as soon as 21May.

update: On the morning of 19 May, the home team reports that USMC Ssgt. Charlie Linville has just become the first combat wounded veteran to summit Mount Everest along with Tim Medvetz of the Heroes Project. With them were an unspecified team of Sherpas, and videographer Kazuya Hiraide, TV producer Ed Wardle.

Still on many team’s mind is the cyclone off the Indian coast. Michael Fagin of www.everestweather.com sent me this image. But according to accuweather it may not be a factor for the Himalaya but some bands may bring moisture and winds so continuing to monitor daily forecasts is a good idea.

Tropical Cyclone Roanu is forecast to move northeastward, paralleling the east coast of India over the next few days with some additional strengthening due to strong outflow and warm sea surface temperatures. Some weakening is then likely before an expected landfall in southeastern Bangladesh later Saturday or Sunday. 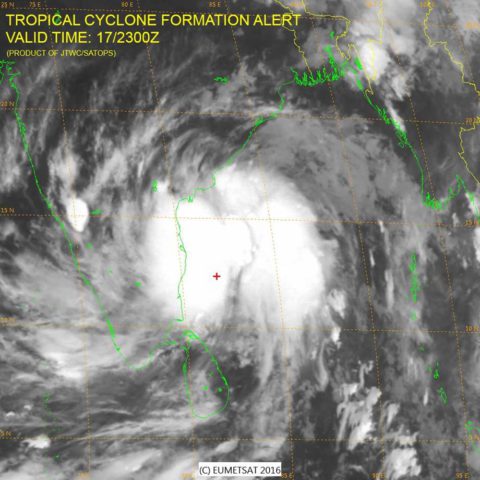 Congratulations to all those who summited and achieved their dreams. Best of luck to those up next.
Climb On!