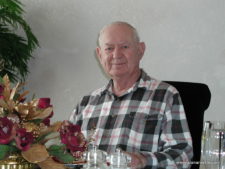 I walked over to my Dad, sitting in ‘his’ chair in the home where my brother and I were raised from the 1950s. Mom sat quietly in ‘her’ chair across the living room. Ken sat on the couch.

I got on my knees to make direct eye contact with him. “Dad, you know Mom is sick and needs 24 hour care” I said gently knowing she was listening but not really understanding. We knew something was wrong with Mom but had no idea it was Alzheimer’s. 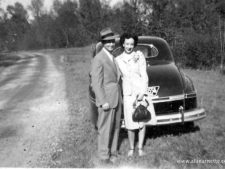 Dad got the 1,000 yard stare and nodded his head, as tears welled up in his 80 something eyes. “I know, I know.” He said. “I’ll watch out for her. She is safe. Everything will be fine.” But the neighbors had told us an entirely different story – her wandering in the neighborhood, Dad getting upset with her and they were worried.

“Yes, but you can move to an assisted living facility where you both can get the care you need. Or you can move in with us.” I added while touching his hand. Mom looked on with interest.

The conversation ended that day with a promise from my Dad that he would look into it. However when I called a week later, nothing had been done and it was clear, he had no interest in leaving their home of 60 years.

My brother and I were left with no options but to accept his decision and prepare for the worse.

Usually I would go on to talk about my mom, Ida. But while watching a television show on HBO the other night, something extremely obvious and a bit embarrassing occurred to me about that time – my Dad was hurting as much as my mom. 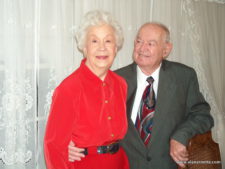 Of course I knew he was physically hurting. Approaching his middle 80s, his health was failing. He was consistently mis-managing his insulin, had hurt his back thus causing chronic pain and, well, he was just getting old.

What I had not internalized was the emotional pain he was going thru watching his wife of 60 some-odd years slowly slipping away. I was focused on her, a common mistake but a mistake.

Overtime I tried to talk to him about Mom and her condition. He always changed the subject. I regret today, not pushing him more.

James B. Arnette was a proud man. Born on a farm in Eastern Tennessee in 1918, Jim joined the Army before he got drafted and was on D-Day +1. With only an 11th grade education, he went on to become the Administrator of a Memphis nursing home. They took care of people with incurable diseases.

A difficult job today, even more so in the 1960’s, ’70 and on. He was there for 30 years, modeling for his two sons and wife, a love and care for people less fortunate.

Family Was His Life 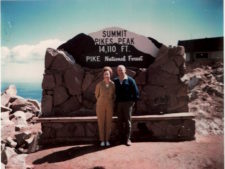 Every Father’s Day for as long as I can remember, we would pack up the ’63 Chevrolet Impala to leave Memphis for a two week vacation – the beaches of Florida, the oil fields of Texas (Dad loved oil!), and then one time to Pikes Peak and on to Estes Park, Colorado where I saw Longs Peak for the first time.

I don’t think I ever told Dad how much I appreciated his planting the ‘mountain seed’ in me that drives my passion today.

But one day in September 2006, I got a call while on a business trip in Atlanta from my cousin. Dad was in a Memphis hospital, not unusual as he was there often. But this time was different, congestive heart failure. I was told he may not make it this time.

I flew to Memphis and was shocked by how quickly Alzheimer’s had taken my mom. I walked in the door of our family home – a complete stranger to her – she let me in.  I was stunned with the scene before me and about to unfold. 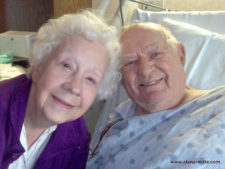 At the hospital’s Intensive Care Unit, I entered Dad’s room, he looked old and frail, yet strong and alive.

“This is quite a moving experience. Come in here with a little bitty thing like a low fever and you end up with heart trouble and kidney trouble but thank God they all improved some.” I filmed him while talking, wanting to capture a few words, perhaps his last.

I shaved his uneven face that day, fed him his dinner and sat quietly with him. He started going thru the list of a dying man – how to pay the bills, what to do with the house, the car. Where he hid his will and valuables. He knew Mom was incapable of managing their affairs once he was gone.

But mostly we were quiet. Mom sat on his bedside, smiling and pulling on his ear like a small child, unable to understand the seriousness of the situation. Dad just smiled back, holding her hand tightly. They pecked each other’s dry lips from time to time.

I knew Dad was going thru the memories of life, and he had many good ones. But the last few years had been difficult. He often lost his patience with his wife. He worried about money. He worried about her. And he never talked about it.

A proud man who made a measurable difference in the world. A man who loved his family.

Against all his wishes, and Ken’s and mine, Dad went on a ventilator and dialysis. Mom and I made one last visit. We entered his room to see him surrounded by machines and tubes – precisely what he never wanted but what his Doctors ordered. I had arranged for him to be taken off the machines and tubes so I could have one last ‘conversation’.

“Dad, you know if you are taken off the machines, you will pass?” I said making direct eye contact. He looked me squarely in the eyes, squeezed my hand tightly, blinked and then gently nodded. We had closure.

Mon, sitting in a chair in the corner, smiled at me as I looked over at her. Later she would ask me “Who was that man?”

After his death, I went through his papers and found hand written receipts for his burial policy when Ken and I were 5 years old – 13 cents a week! He never wanted to burden anyone, especially his family.

He had strong memories of war – it left a mark on him like nothing else in life. And many felt gratitude for what he and millions of others did.

We were extremely fortunate to take Dad and Mom to Normandy in 1998. We walked Omaha Beach together and looked upon the German guns on the embankments. We visited the American cemetery where he found his platoon leader.

In the war museum, a young British man approach Dad. He paused and quietly asked “Were you here?” “Yes.” My Dad answered. The man extended his hand and simply said “Thank you”. Dad, almost inaudibly, replied “You are welcome.”

There was so much more to Ida’s and Jim’s life than the last ’10 seconds’. Today when I climb, I draw inspiration from Mom and strength from Dad. And gratitude to both.

I am proud to be your son.

6 Responses to “A Father’s Day Memory – Climbing, Alzheimer’s and Regrets”