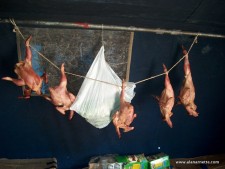 Can diet be an indicator of success on Everest? This past year, the tragic death and subsequent focus on Maria (Marissa) Strydom’s desire to ‘prove vegans can do anything” created a tremendous amount of headlines around diet for climbers and in many cases lead to shameful ridicule of her beliefs and practices.

Meanwhile other climbers claiming to be vegans, have quietly summited Everest thus proving Ms. Strydom’s theory. This brief post is not intended to advocate any lifestyle or delve deeply into being a vegan but more to shed some light on being a vegan, vegetarian or carnivore and climbing.

Kuntal Joisher summited on May 19, 2016. He is a strict vegan who eschews all food other than from plants. While he does not take credit as the first true vegan to summit Everest, others are making that claim on his behalf.

Atanas Ska­tov was praised to be the first vegan to summit Everest on May 24, 2014. On his website he also claims to be a vegan but was consuming honey during his Everest summit, thus would not qualify under the stricter definition according to this website:

Vegetarians do not eat meat, fish, or poultry. Vegans, in addition to being vegetarian, do not use other animal products and by-products such as eggs, dairy products, honey, leather, fur, silk, wool, cosmetics, and soaps derived from animal products.

I asked Kuntal, what role his diet played in his summit:

I think diet is a personal choice you make and I’m not going around forcing my views down anyone’s throat. I am a Vegan, and I wanted to go out and prove that climbing can be done on a Vegan diet. However I was not out there to prove that Vegan diet is superior to any diet.

And his view on the death of Dr. Strydom since he was on the mountains the same time:

I think the articles attributing death of the Australian climber to her Vegan diet were just a great form of online click baiting. There’s not a strong scientific connection between the diet and her death

I know from my own (Alan’s) experience that having a diet rich in carbohydrates and weak on protein was a recipe for a weak body. I have performed my when I had a significant amount of protein in addition to carbs – in other words – a balanced diet. For me that meant meat.

Kuntal explained to me his overall dietary habits:

When I train for Everest, I focus on a eating a very healthy Vegan diet – a Whole foods vegan diet which is low fat and high carbs. And if one eats a balanced healthy Vegan diet you get all your nutrients including enough protein from the diet. This diet has worked wonders for me as my body recovers super fast after some of the most excruciating work outs that I do to get ready for big mountains. I come from a family of people who are businessmen and have led a sedentary lifestyle always. So I’m not as genetically gifted as a lot of other western climbers, however I make it up by eating healthy and training very hard.

Now coming to the diet on the mountain. My personal view is that as we go higher in altitude it becomes harder and harder for our body to digest food easily. And so I think that a protein rich diet is not suitable for high altitude climbing, since protein is the hardest to digest. On the other side simple carbohydrates such as white rice, refined foods such as candy bars, cookies, a bottle of coke etc get broken down easily by the body and can be used as a fuel source. Even though it’s not healthy to eat these things, in the end calories matter big time on the mountain. For me, as I went above Camp 3 I survived on Vegan energy gels by a company called Unived (www.unived.in). These are liquid carbs and electrolytes instantly available to your body to be used as a fuel source. And these worked very well for me. On my final summit push from South col – to – summit – and back to South col, I survived only on green tea and that too about 200 ml that I drank on the summit.

But as evidence that protein comes in many forms, my K2 teammate, Matt Du Puy, a vegetarian, receives most of his protein from plant products. He was strong and confident on the mountain from beginning to summit and back. By the way, he summited Annapurna this past spring and Everest in 2009! Matt says:

My protein comes mostly from beans and nuts when I’m climbing but since I’m not vegan, a lot of it comes from cheese and eggs when I’m training at home and eating a ton of yogurt in Annapurna because once the culture is started, it is easy to maintain if you keep feeding it milk.

But food is not all there is to being a vegan, according to Kuntal:

Truly speaking no Vegan has summited Everest yet.  Because as long as we use insulation jackets made of Down we are not Vegan. As simple as that.

So being vegan is more of a lifestyle, not just a diet.

Kuntal wraps up his thoughts:

… I’m not out there to prove that my diet is superior to someone else’s diet. I’m just out there to prove that big mountains can be climbed on a Vegan diet if you plan and execute well. I know of vegans who come completely ill-prepared and are forced to transfer into non-vegetarian food to survive the strain of Everest. So it depends entirely on the level of research and readiness you’ve come with.

And Matt closes with:

I think people get bent out of shape about this type of thing because so many veg/vegans have this, “holier than thou” attitude. It turns everyone off to anything they say or do but Strydom can’t be lumped in with the zealots. Our dietary needs differ as much as our outward appearances differ. There is no one dietary solution or daemon for the health of the individual or the health of the planet we inhabit.

Regardless of how you get your food, keeping weight on matters. I use a rule of thumb that if you lose more than 10% of your body weight on the climb, you have a lower chance of summiting given the loss of strength, thus (to say the obvious) diet is important.

To sum up, I’m not aware of anyone who tracks the diets of mountain climbers similar to how the Himalayan Database tracks summits, so this is somewhat of an academic discussion but an important one to everyone interested in healthy diets, and summits.

6 Responses to “Can a Vegan Summit Everest?”