For as long as Everest has been climbed, there has been a competition between China and Nepal. Now with China’s recent announcement of building a “mountaineering center” near Everest base camp, climbing Everest from Tibet will have little to do with climbing and more to do with tourism.

Please keep this fact in mind as you read my thoughts: The 2022 winter Olympics will be in Beijing. The last time China hosted the Olympics in 2008, they closed their side of the mountain and placed armed guards on the Nepal side to quash any disruption.

Based on previous actions, it is safe to assume China does not place climbing Everest for foreigners as a high priority. 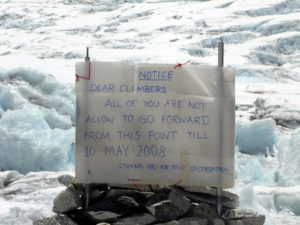 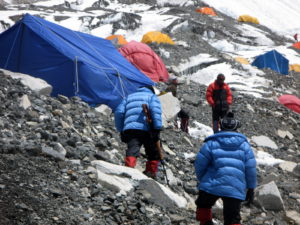 China Daily has ignited a media storm with their report that China will invest $14.7 million in a mountaineering museum near the Tibetan township of Gangkar (Gonggar County) – about 20 miles from the traditional Everest Base Camp which is used as a base for attempts on Everest from Tibet. The new Center is planned to open in 2019 – three years before the Olympics.

According to the China Daily report, the center will cover 900,000-sq.-ft. – the equivalent of 3.5 Super Wal-Marts – and support mountaineers, skiers, paragliders and tour guides, plus medical services, travel agencies and a helicopter rescue base.

In other words, Everest could become the Yosemite of China. To the credit of Nepal, the south flanks of Everest are protected from commerce by being within the Sagarmatha National Park, a UNESCO World Hertigage Site.

“There will also be a mountaineering museum; rental and repair centers for cars, motorbikes and bicycles; and restaurants and accommodation,” said Nyima Tsering, the bureau’s deputy director.

The climbing spokesperson for the project is blind Chinese climber Zhang Hong who was said “I’m very excited. The center could be helpful for me to fulfill my dreams.”

A nuance in the announcement was the comment the “the new center will also cooperate with the Nepalese authorities, which govern the southern slope of Qomolangma, to facilitate helicopter rescue services.” This suggest, the Chinese may not suspend their ban on helicopter rescues from Tibet but rather now allow Nepal companies to fly into China for rescues. 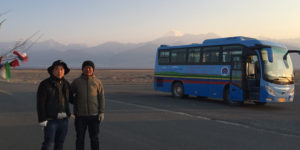 Sadly the chances are slim to none that Tibet will return to it’s past life of nomads and free monasteries across it’s vast high Steps. China has embarked on a steady campaign to make Tibet, China and exploiting Tibet for tourism purposes is another step.

Already a high speed train connects Beijing to Lhasa and a paved road connects Lhasa to Everest Base Camp. Thousand of tourist visit the region each year, similar to the Grand Canyon in the United States or the Alps in Europe.

The region is vast and isolated so with hundreds of thousands of tourist arriving annually, support services are needed. Remember that this area is well above 12,000 feet while Beijing is at sea level. Anyone taking the bullet train is bound for altitude sickness.

While climbing Everest gets the headlines, I believe this is more about simple tourism – making it easy for the emerging middle and upper class throughout China to see Everest up close and ‘explore’ Tibet. That is the bottom line in my view.

For many in the climbing community, this is more bad news than good as it will increase the traffic, pollution and red tape associated with climbing Everest. I think it is safe to assume the climbing permits will increase from the $7,000 today to perhaps what Nepal charges, $11,000.

We may see more Chinese teams move to the North. For reference, Chinese nationals must have summited an 8000 meter mountain before being accepted on an Everest climb from China, and the cost is $60,000. Thus many Chinese are climbing from Nepal where there are no requirements and the cost is less than half for them. source

Those rules and prices may change in order to open the mountain to more Chinese nationals. But, as the Nepalese government has seen, it is bad press for people to die on Everest, assuming they are reported. It is rumored that hundreds of Chinese have died on the North side of Everest over the years and have never been reported.

Thus in an effort to make the mountain safer, it is reasonable to assume the CTMA will double down on their management of fixing  the climbing ropes from the North Col to the Summit. That may include holding back teams until they are fixed and even giving Chinese national teams a preference in first ascents.

I am speculating that they may add more ladders on the notorious Steps that prove to be a bottle neck today.

Overall, this news of development is not good news for the climber who seeks the Tibet side as the route less crowded, more extreme and more to brag about. Now it may become like a tourist route on Mont Blanc. They will need to seek lesser climbed, and more challenging routes like the Pinnacles or West ridge – not a bad thing for true climbers.

However, not everyone agrees with my assessment. Adrian Balligner of Alpenglow says in his marketing material and press interviews that climbing from the south side is too dangerous for his employees. He has been quoted in the press that he supports the benefits of this tourism project:

“Way above and beyond anything else – helicopter rescue.  …. The North Side of Everest is a far more logical and safe way to climb the mountain than the more popular South (Nepali) Side. “

Alpenglow offers a climb from the Tibet side for $85,000. The average price based on my annual survey is around $30,000. You can read his complete thoughts at this link.

Anyone who considers climbing Everest usually ask this question. And you can find outfitters who will tell you what you want to hear to get your business.

In a recent interview I did with with well respected 15 times Everest Summit Dave Hahn who has summited from both sides, he made this comparison:

Both sides of the mountain present quite different challenges to guiding.  The North side summit day is a tougher one to manage for guiding a group, in my opinion.  Particularly if it gets crowded.  It is a series of choke points and traverses that are extremely difficult to reverse if someone gets sick or hurt.  It can be very difficult to get rid of altitude (go lower)-which is normally essential to start solving health challenges.

North side political problems in recent years shouldn’t be ignored either… the permitting can’t always be counted on in advance since the Chinese have put their obvious priority on “managing” Tibet away from the prying eyes of foreigners.

The Southside danger and difficulty of the Icefall is well-documented, but perhaps it isn’t always appreciated that the climbers who master the Icefall are ultimately better skilled for taking on the difficulties up high on the Southern route.

I think that individual guides may have good reasons for choosing either the North or South sides to work on.  When those guides make public pronouncements as to why their own choice is the only responsible course of action… it should be viewed less as a public service and more as old fashioned self promotion.

For the record, the spring 2016 season was about normal for Everest with over 600 summits from both sides and five deaths, all on the Nepal side. The tragedies of 2014 (serac release) and 2015 (earthquake) seem to have been forgotten.

The bottom line for me is that this Chinese development was inevitable and in many way continues to make Nepal the preferred route to summit Everest.

While some decry the trek from Lukla to base camp as an invitation to sickness, I contend that it remains one of the most beautiful treks in the world. Staying smart and practicing good hygiene prevents most of the issues in addition to the benefits of acclimatizing naturally as compared to using altitude tents at home. That said, the drive to Shishapangma base camp is jaw-dropping, inspirational and a perfect way to begin a climb.

As for climbing, the north has not seen the crowding issues of the south simply due to less traffic – 4,421 South summits vs. 2,580 North.

Wait until there are Chinese teams of 50 or 150 attempting the mountain and stuck at the 2nd Step. The Hillary Step will look live a sieve in comparison.

Yes, Nepal has issue but so does China. Don’t let anyone tell you otherwise. Both sides have risks and opportunities for improvement.

The good news is that with the Chinese investment on the north, they will focus on cleaning up the extensive trash on that side, or perhaps add safety teams. In reaction the Nepalese might come to grips with the overcrowding and limit the number of climbing permits issued each season

If they want to compete, lets see a competition for the lowest trash and fewest deaths.