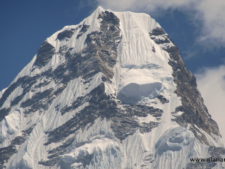 Sad news from Nepal’s Ama Dablam. A relatively small earthquake, 5.4 in magnitude centered near Namche Bazaar, triggered the release of a few ice blocks that struck and killed climbing Sherpa, Lakpa Thundu Sherpa, a permanent resident of Pangboche, Solukhumbu district. He was supporting British climber, Ciaran Hill who was injured by the falling ice.

They were climbing with a 13 person team lead by Jon Gupta along with Tim Mosedale out of the UK. The climbers were above Camp 3 on their summit push when the ice released. The Himalayan Times reported it was an avalanche but Mosedale seems to characterize it more of falling ice on his Facebook page.

The USGS said the quake was located 11 miles WNW of Namche Bazzar or 75 miles east of Kathmandu and occurred at 5:20 am local time. It was felt in Kathmandu where no damage was reported. It is unclear if any of the nearby villages were damaged or there were any casualties. In 2015, the 7.8 magnitude so-called Gorka earthquake killed over 9,000 people through Nepal including 18 at Everest Base Camp. This quake is considered an aftershock from the Gorka quake. 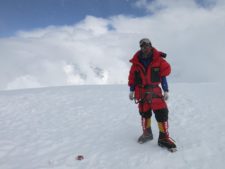 Mosedale paid his respects to Thundu this way:

Thundu leaves behind a wife and 2 boys, aged 8 and 14, who live in Kathmandu. Whilst there is a modicum of insurance available for the family it won’t get the children through the rest of their schooling. To that end I am putting out an appeal for donations, however small, so that the family can rest assured that they aren’t going to face financial hardship. If you are able to help then please go to www.justgiving.com/timmosedale and mark your donation ‘For Thundu.’

Billi Bierling recently summited Cho Oyu with Thundu and posted this remebrerance on her Facebook page:

I am lost for words. Lhakpa Thundu – the man, who so patiently summited Cho Oyu with me on 1st October this year, died in an avalanche on Ama Dablam. The avalanche was triggered by a 5.2 earthquake, which shook Nepal this morning. I feel very sad but at the same time, I feel very lucky to have had the chance to get to know this kind man and spend some very memorable moments with him. Lhakpa Thundu – my thoughts are with you and with your family. 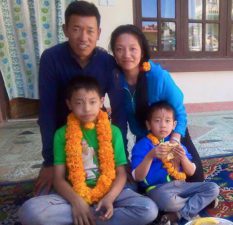 This year, high winds have stopped several teams but nothing out of the ordinary has been reported about the snow conditions. As I posted on October 28, 2016, Ama Dablam has developed a somewhat dangerous reputation:

Nepal is extremely popular for climbs of the so called “Trekking Peaks” of Island, Baruntse and Meru. Multiple teams are reported to have safely summited these peaks this month. 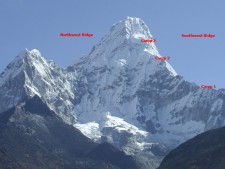 Ama Dablam is often called the most beautiful peak in the world and it is attracting record crowds this 2016 autumn season.

Ama has emerged as a dangerous climb. Six climbers were killed in November 2006 when part of the Dablam collapsed hitting Camp 3. Parts of the  Dablam also collapsed in late 2008 but didn’t take any lives. In 2014, three climbers were killed when the Dablam released but some say they were depending on old ropes and that contributed to their deaths.

When I summited it in 2000, we were the only team on the mountain. The Himalayan Times excellent climbing journalist Rajan Pokhrel reported more than 400 climbers are on the mountain split evenly between foreigners and local Sherpa support.

A team of Sherpas including Pemba Wongdi, Pasang Tenji, Nima, Lhakpa Wongchhu, Temba and Thuktan fixed the route to the summit via the Southeast ridge route a few days ago opening the flood gates. There have been several attempts in the past three years to summit via the North Ridge instead of the standard South East Ridge, but there has been no success.

My sincere condolences to Lhakpa Thundu’s family, friends and teammates.

correction. A previous version stated that Steve Plain was a leader. He was on the expedition and not a leader. My apologies for the error.