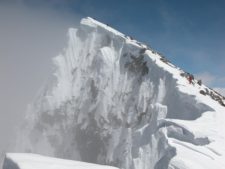 For some climbers one summit is not enough so they add a second peak on the same trip to claim that all elusive double.

Now that there have been summits on Broad Peak this 2017 summer, many climbers will move to K2. This coveted double header is often sought but rarely achieved. The most recent double for Broad Peak and K2 , I can remember, was in 2014 by Bulgarian climber Boyan Petrov. I passed him descending from the summit as he was going up near Camp 2. He was young, strong and confident so I wasn’t surprised to learn he had summited.

For professional climbers like an Ed Viesturs (Dhaulagiri and Manaslu in 1999), Reinhold Messner and their ilk, doubles were common. This is an incomplete list of multiple summits by climbers who have summited all fourteen of the 8000 meter mountains. Note, some of these summits were in spring and autumn so technically not in the same season. I used Wikipedia as the source.

These pros had the fitness, the financial backing to take helicopters in some cases from peak to peak and, clearly, the skills to pull it off. 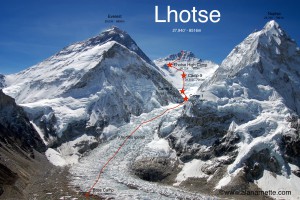 Perhaps there is no better case in point of modern day doubles than the Everest/Lhotse combo.

In 2011 Alpine Ascent (AAI) guide, Michael Horst, made the direct climb of Lhotse after Everest from the South Col popular. He summited Lhotse 21 hours after summiting Everest. Today it is common for guides to offer it for a ‘small’ uplift of $15,000 to their $65,000 Everest fee.

It has proved to be popular with members signing up for the double but many go home content with “just” bagging Everest. That said, it has become commonplace with several climbers achieving this double in spring 2017.

One aspect of the Everest/Lhotse double is that most of the recent doubles summited Lhotse from the South Col after their Everest summit. While there are no official rules, I believe all of the 34 climbers who have summited all fourteen of the 8000ers climbed Lhotse as a separate climb from Base Camp.

Another double that is becoming more popular is Cho Oyu/Everest. This year, Kilian Jornet claimed to have summited Cho Oyu and then Everest twice, but he said he was not sure he reached the true summit Cho Oyu. In 2016 American David Roeske summited both within 11 days. Back in 2013, Kenton Cool also summited both plus Nuptse.

Finally making multiple summits of the same mountain has come into vogue for some strange reason. This year on Everest several climbers accomplished this. Of course many do not want their names listed because the Nepal Government would want another $11,000 for that second Everest summit! But one person given broad publicity was Anshu Jamsenpa, a 38-year-old mother of two from India, who summited twice in less than a week.

I asked Eberhard Jurgalski who runs research for his analysis of doubles in the Karakorum for Broad Peak/K2 and Gasherbrum I/Gasherbrum II. Eberhard tracks all the 8000 meter mountains and published list similar to the Himalayan Database (HDB) but covers Pakistan whereas the HDB does not.

He said for K2/BP there are only 8 doubles and for GI/GII there have been 118 with 2 that are listed as disputed. For this analysis this means a climber summited both peaks in the same season, usually July/August in the Karakorum. 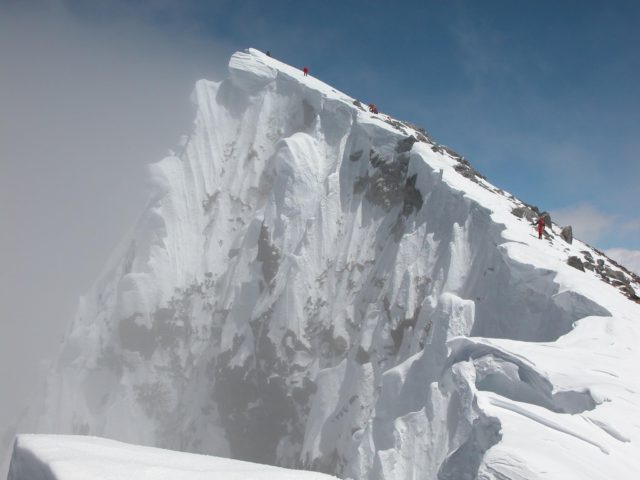 Why K2/BP is so Difficult

We have seen that for some combos it has become not uncommon (in other words rare but becoming more common) to summit multiple peaks in the same season and certainly same year. But why is K2/Broad Peak so hard? Beyond the obvious factor of physical strength, there are also factors completely out of the climber’s control.

First up is weather. As I have covered extensively, forecasting weather in the Karakorum makes Everest forecasting look like a coastal city with the same weather everyday all year long!.

As we are seeing this year on Broad Peak just in the last few weeks, the teams received a forecast calling for wind and snow and were met with a bright sunny day. So planning becomes extremely difficult this causing delay and after delay.

Which bring the second reason on why doubles are so difficult. Usually a team will plan on 45 to 60 days for one expedition. Trying to squeeze two in compresses all the schedules.

On BP/K2, the theory is to use Broad Peak for acclimatization then climb K2 in “alpine style” meaning one trip from base camp to the summit – no rotations. This is what Boyan Petrov did in 2014.

This works fine if the climber was able to truly acclimatize on BP – spend at least 4 to 6 nights on the Hill, but if weather, illness or conditions prevent that, the acclimatization plans falls flat and the person now must acclimatize on K2.

The third factor is physical capability. Climbing Broad Peak is no easy task. The snow slopes are long and at sharp angles. There is an ever present danger of avalanches and crevasses below Camp 1. Reaching the summit dicey at best in that it takes climbing a long summit ridge line filled with fragile cornices. Climbers have been known to punch thru the cornices or descending the wrong direction into China and were never found.

Obviously, all of this take a toll on the body so moving over to K2, the climber has already lost weight, probably 5% of their body weight, and need to rest before climbing K2 – in any style.

The last factor is between the ears. All the stress of trying to summit one 8000er usually leaves a person physically, mentally and emotionally drained. If you ask most people who summit an 800er, they will say it took over a month back home to fully recover. So to go directly another 8000er is a test of massive proportions.

K2 is a climb that sucks all you have out of your body, starting with the climb to Camp 1. It is steep, continuous and unforgiving. In the back of your mid is rockfall, avalanche and unexpected weather. This stress drains the mind and body.

So while, on an emotional high for the previous summit, K2 takes all the energy, and motivation, and strips it away. You have to really want that summit, and willing to push your body far beyond what you ever had.

The popular combo of GI/GII is slightly more attainable in that GI is recognized along with Cho Oyu as very attainable, however GI is noted for it’s difficulty.

This is an excellent video from 2016 double of Gasherbrum I and Gasherbrum II by Dawa Gyalje Sherpa of the Dreamers Destination team. They had three complete the double of GI/GII that season.

Now for an update on K2 this season.

Russell Brice gave a solid update on his team’s progress on the Česen route – not the more common Abruzzi where Mingma Sherpa and his Destationa Dreamers team have reached Camp 4 – at least with some gear.

The weather has been somewhat difficult to work around. We need reasonably clear weather to see where we are going and not too much wind as well as reasonable snow conditions underfoot. The section between C1 and C2 is probably the most technical part of our route. The Sherpa’s, Woody, Shinji and PK tried to reach C2 on 7 Jul, but by the time they had all reached C1 the weather had turned from a clear bright night sky to wind and snow, so they returned to BC. It seems that we have 4 seasons of weather in a day, which is hard to work around

Brice, one of the most – if not the most – experienced high altitude guide/operator in the world made this introspective observation on K2:

The more time I spend here the more I learn about the mountain, weather and also snow conditions….kind of scary. But I did take this trip on as a challenge to my guiding knowledge and observation skills. I can’t say I like this challenge as it means many sleepless nights, and it was one of those nights that I was awake at 02.00 when the avalanche occurred.

The Himex team wants to leave base camp on August 4th so they are looking at a summit probably at the very end of July at this point.

Furtenbach Adventures guide, Rupert Hauer and 3 members and 3 Sherpas reached the fore summit or true Broad Peak summit on 10 July. Some are now headed to K2 and will perhaps get the double. 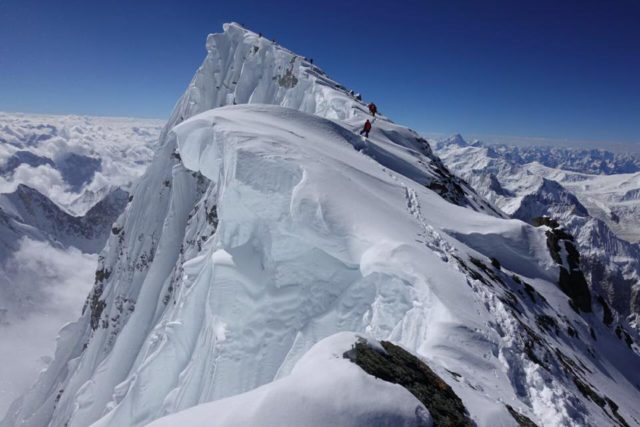 By the way, 29 year-old Polish climber and skier Andrzej Bargiel, will try to ski non stop from the summit of K2 via the Česen route.  Another skier Slovenian Davo Karnicar abandoned his effort due to a back injury. He is reported to have said the key section of the South Face was currently snow-free. That section is extremely rocky and does not hold snow well.

One section that I personally think would be difficult to truly ski is the traverse just above the Bottleneck. Both the Abruzzi and Česen routes take this traverse. I took this picture in 2014: 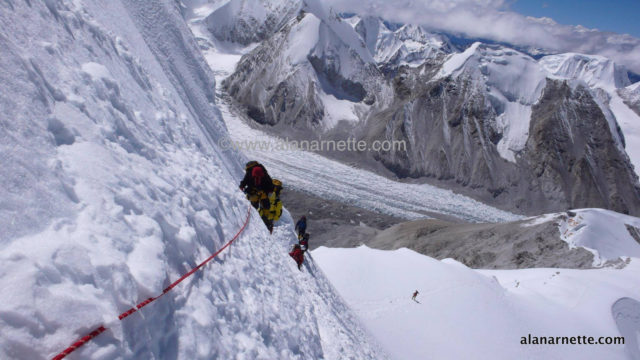