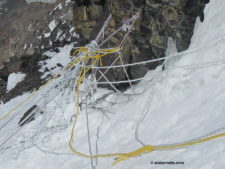 Tragic news from K2 on Saturday 7 July, 2018. Canadian climber Serge Dessureault is thought to have fallen to his death just below Houses’ Chimney or perhaps while rappelling down the Black Pyramid. He was climbing with fellow Quebecers Nathalie Fortin and Maurice Beausejour who are both safe. Fortin posted on Facebook that they had spent the night at Camp 2 for acclimatization purposes and planned to descend back to Base Camp to wait for a suitable summit weather window. 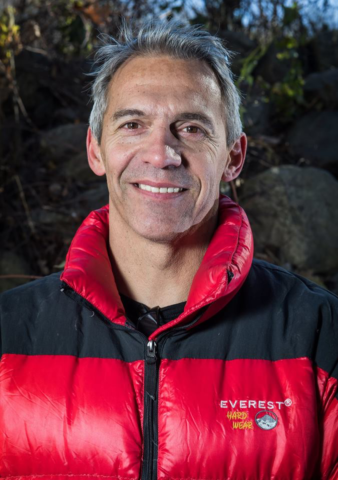 Fortin added, “This morning he left 30 minutes before me to get back to the CB [Base Camp]. We don’t know what happened, but the fall was fatal. It’s very difficult here! I keep thinking about the close family I know… it’s terrible.”

His body has been retrieved and taken to Advanced Base Camp. He will be taken to Islamabad as weather allows. The French team was supported by Summit Karakorum who issued this statement:

Statement of Summit Karakoram Pakistan We stand with the family and friends of Serge Dessureault a great friend we lost today.

We are ground agent of K2 Expedition of renowned climber Serge Dessureault from Canada who fell down this morning at 925hrs dated 7-7-2018 from below chimney while climbing at camp 2. His body is found by his fellow member, High altitude porter and bought to ABC We are in touch with the family to get further instructions, the final decision will be made by the family to bring down the body or buried it near K2

As is usual with these tragedies, there are multiple versions of the incident emerging however, the common theme is that he fell.

Dawa Sherpa of Seven Summits Treks has the largest team on K2. He posted on Facebook, “Unfortunately, a Canadian team leader Mr. Serge (a member at Summit Karakoram) died due to the destructive fall from Chimney House. My deep sympathy goes to his family and relatives, may his soul Rest In Peace.”

Garett Madison of Maddison Mountaineering posted “Unfortunately, today we witnessed a climber from another team (Canadian) falling down the mountain. The cause of the accident is unclear, however from reports of Sherpas who were nearby it may have been an old fixed rope that broke as the climber was descending below Camp 2. Our team’s thoughts and prayers are with the climber and his family.”

The Japanese team posted, “Sad news from K2! In the morning of July 7, Mr. Serge Dessureault, a Canadian-Quebec group, who was advanced to Mount K2 in a guide to summit Karakoram, said that he slipped from under chimney during climbing. The body was found by a team member and a High-Porter, and was brought to ABC. It’s about to drop down on a chopper in askari aviation or bury it near k2 or wait for a family decision.”

Serge Dessureault, 53, was a Montreal firefighter for almost 30 years and was the leader of the three-person Quebec K2 team. Dessureault wanted to be the first Quebecer to have climbed Everest and K2. He was stopped in 2016 by avalanche danger on K2.

James Proulx of Drummondville, Quebec told me today “I know for a fact that this whole team was very important for Quebecers. Everyone here in Quebec who loved climbing followed their k2 ascent.”

The two remaining members of the Quebec team have canceled their K2 expedition.

Many of the off-record reports cite the use of old ropes on K2. I can share my 2014 experience where I saw a spider web of old ropes especial on the Black Pyramid. We were extremely careful, and double and tripled checked to clip into only the new ropes put in that season. The old ropes regardless of quality will rot and weaken after a season of exposure to weather and especially UV rays for the sun at that altitude. 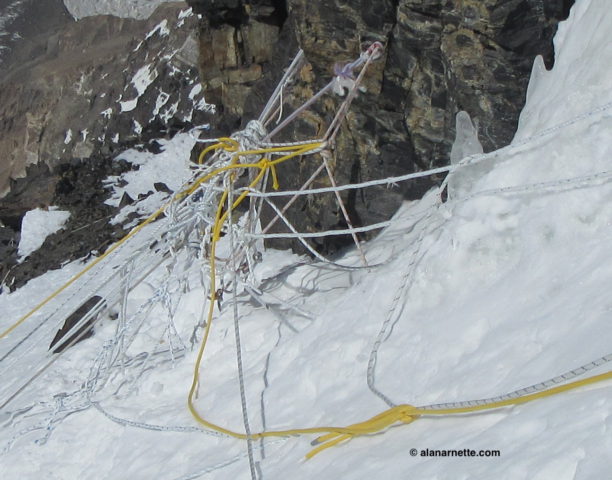 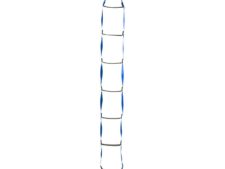 If you climb mountains or even read about climbing history, House’s Chimney is like the “old” Hillary Step on Everest but magnitudes of more difficulty in spite of the lower altitude. Free climbed by American Bob House in 1939, it is a 100’ shoulder width crack in a rock wall. Over time, it has been determined to be the safest route to the higher flanks of K2. Some rate it at 5.6 without aid, but at 21,500’ it is a challenge regardless of the rating, or aid.

There is an old “rope ladder” in the Chimney that some climbers will occasionally put a foot or hand on but most assume it is unstable and stem up the chimney with their jumar attached to a new fixed line. Going down is a simple rappel or abseil but care must be taken to rig the rappel device properly or a sudden fall will occur.

The same warning applies on the Black Pyramid where four to ten rappels may be required depending on the season and skill of the climber. Any mistake can be deadly in this section as it is low 5th class rock but highly exposed with little forgiveness. These are two videos I made in this section 2014.

Veriglass on the Black Pyramid in 2014:

It’s unclear what brand of new ropes were used to fix K2 but over on Broad Peak, Jake Meyers gives this description:

By the sounds of things, the majority of the fixed ropes have been put in by a German Team, and when in place, were of pretty good quality, using more traditional static (very low stretch) Kernmantle rope, with only a few sections using the cheaper ‘Korean rope’. Korean rope is 3 strand braided nylon rope, which is cheap and light, but the quality suffers as a result (it’s often referred to as ‘Korean washing line’). It’s perfectly strong enough when it’s new, but it does get abraded as it runs over rock, and gets horribly twisted when you abseil on it.

The “Korean Cord” is usually used on K2 but maybe not this year since Maddison Mountaineering was co-leading the rope fixing effort along with Seven Summits Treks and puts safety first on the list.

As forecast, this weekend, the climbers are having good weather for a change – clear skies and reasonable temperatures.  Most teams have climbers at C1 or C2 on K2. And on the Gasherbrums, Adam Bielecki said, “There is sunshine in the base camp again and the weather forecast for the next days is quite optimistic. We are going up tomorrow and our aim is to establish camp 3. Finally up”

Dawa Sherpa  added that on Saturday, “It was a nice weather today, 5 members and 11 Sherpa are in Camp II and some others parties are at BC and C1.” and “Rest of all are ok and pushing to high altitude, we are planning to make final summit push after 20th July.”

Andrzej Bargiel had wanted to acclimatize on GII but with the bad weather abandoned this is is now moving to K2 Base Camp. He wants to ski from the summit of K2.

My sincere condolences to the family, friends, and teammates, and all of Quebec on their loss. Simply tragic.