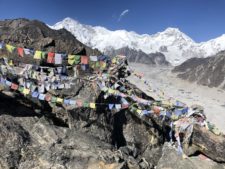 Setting and striving to achieve hard goals is central to my life. I’ve found that when I lack a goal, I feel like I’m drifting with no destination in sight. Thus today was a milestone in a series of goals I set almost two years ago.

When that 100 mph wind gust sent me spinning into a rock field breaking my face and leg I knew my life would never be the same. However, I almost immediately began setting goals as to my progress, both short and long term. But, I didn’t know what I didn’t know and that unknown became the fuel to keep me pushing.

After more “progress” with the help of the miracle worker Nina Paterson with her unique form of physical therapy, I slowly began to go higher in 2018. Climbing with good friends became medicine for my mind. In August I climbed the simple, but poignant peak Mt.Ida cutting my time in half from 2017. I felt my mom’s presence that day. With a strong group of friends, we were turned back on Longs on my birthday in July when the weather turned bad. But summiting Longs was important to me so I went back, alone, and summited on September 18, only two weeks before I left for Nepal to climb the 20,000-foot Island Peak.

I always say “altitude is exponential”. In other words there is a huge difference between 10K to 12K and 18K to 20K and so on. I strongly believe in muscle memory and that my body has been “trained” to adapt to high altitude but after taking a year off, gaining a bit of weight, crossing the age 62 mark and not knowing what I didn’t know … well lets just say, while confident, I left Colorado with a series of open questions.

The trek thus far has been amazing. I know I always talk about what a great experience trekking or climbing in Nepal is, so I won’t go on and on, but seriously, it is really …. OK 🙂 Perhaps it was the anxiety that triggered some long term memories but my mind kept going back to 1997 and my first visit to Nepal for a trek to Everest Base Camp (it really did change my life!) Whoops, sorry about that.

So today, October 13, 2018, Kami and I made our way higher along the less traveled Goyko Route. The scenery was stunning but I was a bit pre-occupied knowing that once we arrived in Goyko, at elevation 4790-meters/15,715-feet, we were going to hike up Goyko Ri for acclimatization purposes in anticipation of Island next week. Goyko Ri tops out at 5,357-meters/17,575-feet – a bit higher than Longs.

We left at noon. In Colorado, I set a goal of hiking at 1,000 to 1,500-feet an hour at altitudes above 12,000-feet. Knowing we has 2,000-feet above 15,000-feet, I set my expectations for a 3 hour hike to the top. Kami set the pace. The dirt path was well worn steadily climbing at a 10 to 20 degree angle.The views became more and more rewarding as we gained altitude. I got into my mental state of “go all day at this pace” and let my mind wander. I paused to take in the moment. Deep down, a strong sense of peace came over me. I felt my pace pick up a bit. 16,000 then 16,400 lead to breaking 17,000. I glanced at my altimeter watch a couple of times then pulled my coat sleeve over the measuring device. I knew where I was.

Prayer flags adorned the summit of Goyko Ri. Kami and I were joined by Maggie and Pete, a UK couple whom we had befriended a couple of nights ago. They are abut my age and are back to Nepal to trek. They said they were changed after their last trip to Nepal in 2002. 🙂

I scrambled to the highest rock, standing with the pride of a Pirate as I looked over the bounty. And I knew this was not a game but rather a passion. We had made the top in 1.5 hours – half what I had planned. I asked my body and essence to take me back higher, and they responded. As I stood on the summit, the most extraordinary view unfolded. Cho Oyu to my left, Everest, Lhotse and Nuptse straight ahead, and Makalu to my right. Four of the fourteen 8000-meter peaks towering above the smaller peaks. All seemed within my grasp.

Without thought, my mind returned to my Cho Oyu climb in 1999 where I reached 8000-meters but fell short of the true summit. My eye traced the routes on Everest pausing at the summit. I closed my eyes reliving that moment in 2011. I studied Lhotse carefully, feeling this peak may remain out of my grasp after two attempts in 2014 and 2015. And Makalu, what a beautiful mountain pyramid. I can only dream.

So yes, goals drive life. Without goals there is no sense of accomplishment and achievement – for me. I will continue to set goals, some small, others huge. This Alzheimer’s goal of $25,000 is what I’m talking about. 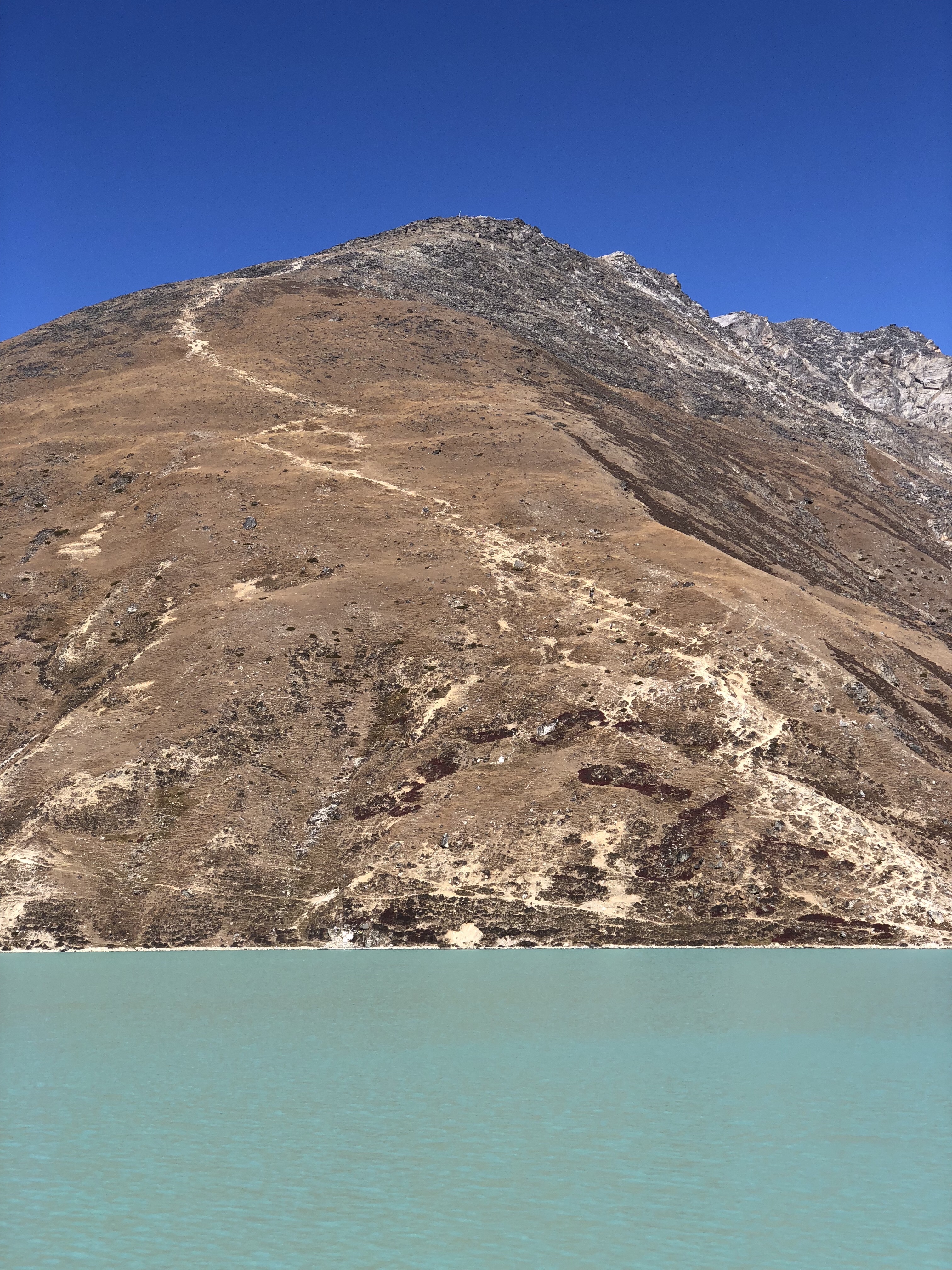 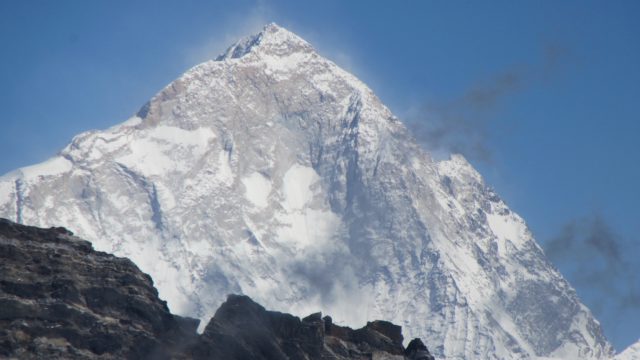 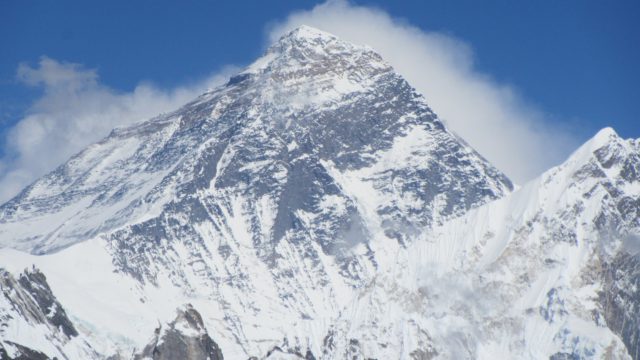 Everest with her famous plume. Excellent view of North Face from Goyko Ri 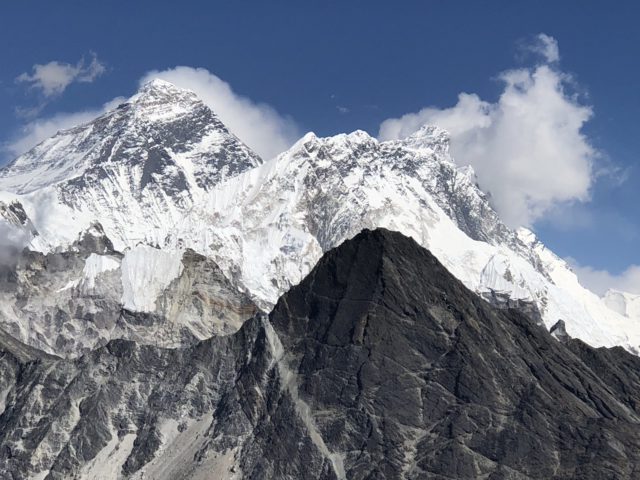 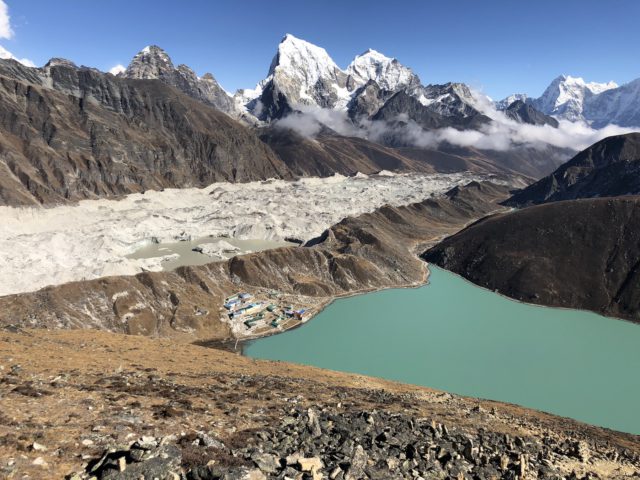 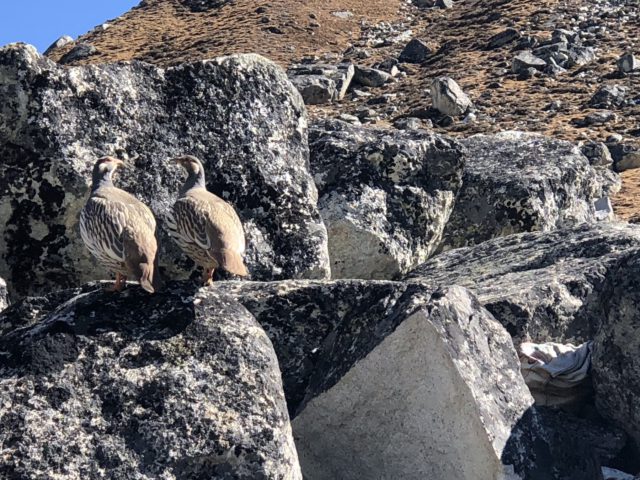 Tibetan Snowcock, This bird is sacred to the Sherpa people. 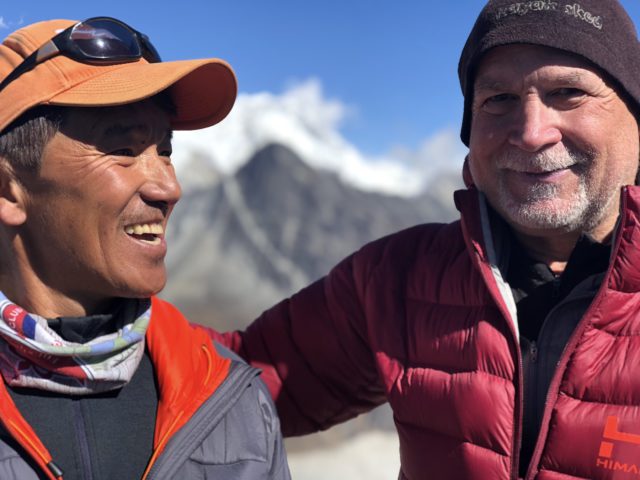 Kami Sherpa and Alan Arnette on the summit of Goyko Ri, Nepal