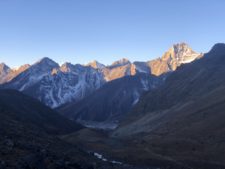 Kami and I were awakened by another group in the teahouse at 3:00am who apparently thought they were alone. While I’m not sure what they were saying, similar to the Lukla dog barking competition, everyone was involved and it seemed to be a competition between loud talking and loud walking. I’m pretty sure there was a Seinfeld episode about this.

In any event, we got out of our sleeping bags at 4 and were walking in the dark at 5. The path is well worn as the Cho La is a classic trek in the Khumbu. Many people use this as part of the Three Passes trek (Kongma La, Cho La and the Renjo La) when they visit Everest Base Camp. As a result there were lots of people on the route, but not as many as coming up from the other side.

Ballet on the Rocks

It starts on a 30 degree rocky hillside easing around 17,000-feet. Then it drops into a massive valley marked with glacial lakes and streams. It is a beautiful setting, something out of Lord of the Rings. Once into the valley proper, the trail meanders along until reaching the other side, perhaps a mile, or less, in total distance. Then the real work begins.

The route is extremely rocky, filled with boulders. It reminded me a lot of the boulder field on Longs Peak. At times you hop from chair size boulder to another trying to not miss your spot or sprain an ankle. In my case, I had a bit of anxiety but thankfully there was zero wind and the temps were hovering around freezing.

This Ballet on the Rocks continued for another hour steadily gaining elevation. At times the “trail” completely disappeared and we just boulder hopped. While I was pleased with my speed, it felt slow, but I was happy to reach the prayer-flagged covered summit with no injuries. That said, we made it in 3:15 minutes, quite a bit faster than what Kami had predicted.

We took our first break on the Pass enjoying the views looking back and looking ahead. There were probably 30 people up there. At 17,782-feet, I felt the thin air. We left the Pass and stepped on snow for the first time, but only for about 15 minutes on the glacier. The route descending quickly along the glacier edge and onto a flat plain with an easy trail to Dzongla. By the way, all the teahouses were filled at Dzongla. Its busy in the Khumbu!

Next up: Imja Tse

So a good day but I also know that we will be another 2,000-feet higher in a few days. So with two hikes above 17,500-feet, I’m feeling really good about our Island Peak climb. By the way, Island Peak’s proper name is Imja Tse. In 1953 Eric Shipton named it Island Peak because it appears as an island in a sea of ice when viewed from Dingboche. The Nepal government changed the name to Imja Tse.

The climbing conditions on Imja Tse are reported to be good, albeit cold when windy. There is a four ladder crevasse crossing and the 1,000-foot headwall is strong and proud serving as the gateway to the summit ridge. We are still targeting the 19 or 20th.

As I wrote yesterday, I’m fond of goals. Today was a good day. It felt good to be in the high mountains, surrounded by snow-covered peaks and imposing rock walls. I struggled for breath from time to time but that just reminded me of where I was and why I was there. I can feel my “high-altitude cell memories” coming back online.

Even though occasionally, this is hard, this is exactly what I wanted.

As an incentive (I think 🙂  ), for any donation over $500, I’ll call you once I’m down from Island and when I get home, send you a print of any photo I have posted, signed if you like. If you have already made a $500+ donation, I’ll contact you.

>I have many more pictures but the Internet is too slow to load them before I run out of power so here are few from today. 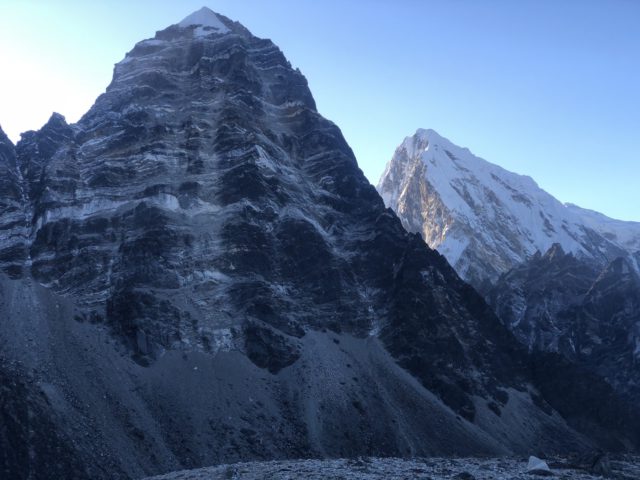 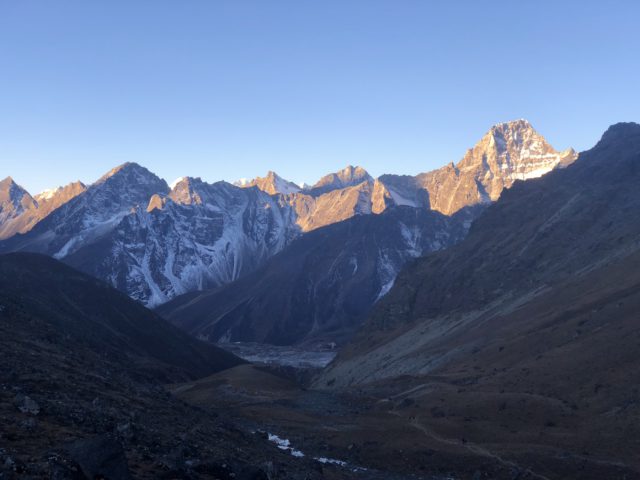 Looking back towards Goyko at sunrise ~6:00 am 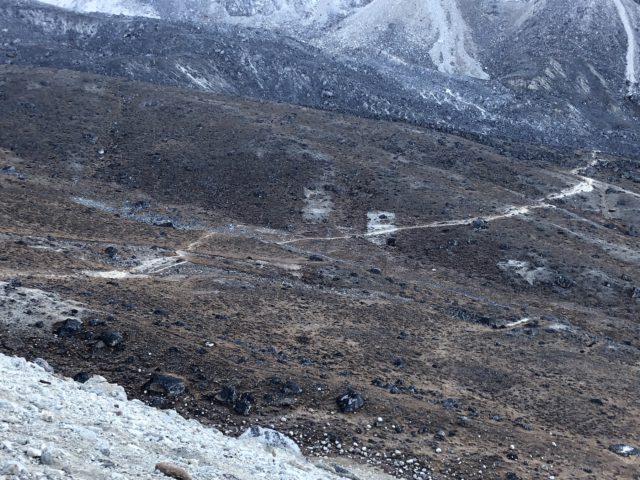 Trail in the Valley 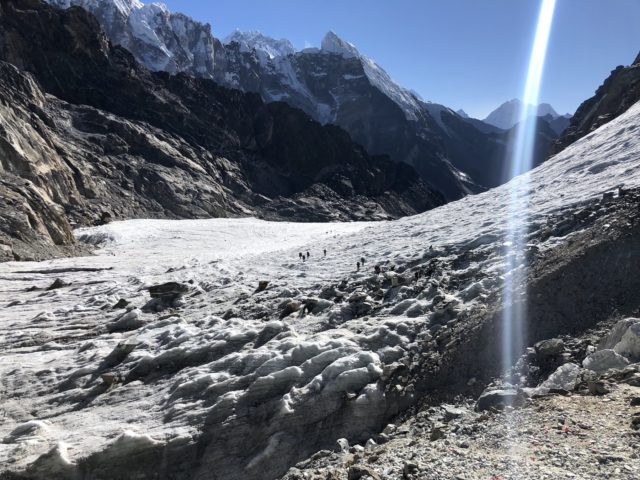 Glacier below the Pass